From Uncyclopedia, the content-free encyclopedia
(Redirected from Fat chicks)
Jump to navigation Jump to search 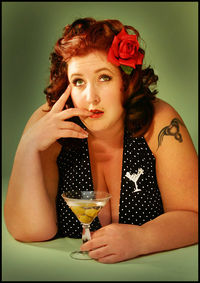 Eternal optimist or hopeless romantic? She believes, in her heart of hearts, that he'll come around and give up men for her. Fat chance, fat girl.

The Fat Girl is a mandatory accessory for a young gay man who is newly out of the closet, according to Homosexual Occupational Marketing Organization (HOMO). Her primary job is to validate each new man who is seduced into the round the clock cha-cha-heels party lifestyle enjoyed by all Pupate-Homosexuals throughout the world.

The role of The Fat Girl in a newly out gay man's life (known as the Pupate-Homosexual, or Bar Trash stage) is to act as his first support network, line of defense and confidant. No Pupate-Homosexual can gain a healthy sense of self-worth without having at least one supportive woman in his life; the larger the woman, the more successful the queer outlook on life.

While the lifestyle of same sex preference is always a chosen lifestyle, The Fat Girl is unique - a naturally occurring phenomenon found around the world especially designed by Mother Nature just in case someone decides to become a Turd Burglar, a Poop Pipe Plumber or Fudge Packer. Before the advent of modern Homosexual rights, these rotund women enjoyed careers as loving Aunties and Nuns.

Since 1970, however, The Fat Girl has been the exclusive property of gay men, who rely upon these women for emotional and sometimes, financial support. Her hefty emotional and financial investment in the Pupate-Homosexual destroys her ability to make new friends of her own, or to make plans with anyone because she has nothing left to give. She will prove to be totally unreliable and disloyal to everyone except her Pupate-Homosexual of choice.

How do these women handle such a colossal task? Well, they too have an insatiable need for their own affirmations in life, much like a sponge has an insatiable need for water. The Fat Girl is also willing to share their unending supplies of hope, dreams and support with anyone who has been given as short a stick in life as they. Thus, The Fat Girl identifies with the Pupate-Homosexual, and vow to be there for them, whenever that may be, because they have so much love to give that they could explode at any minute. She fully expects everyone to recognize what a good, compassionate and loving person she is even though the only approval that matters to her is that of her Pupate-Homosexual.

All I have to do is wait…

The Fat Girl never outgrows her belief that Hello Kitty is cute, or that she could ever love any color more than she loves pink. She also will never outgrow the need for a Snickers bar (or ten of them). In her heart, she knows that Prince Charming is just around the corner, any corner.

“Why,” the Fat Girl will think to her self, “he could be in that Men’s Room at this very minute!”

That Prince Charming is around the corner, in the Men’s Room, playing lavatory stall limbo is not her concern. The fact is that he is in there and she is sure of it.

Glad you asked. Because above all things in the world, The Fat Girl believes that this is a just phase that “he” is going through and that she can “change him” if she loves him enough. She knows that he loves her – why else would he tell her all about the great sex and empty loneliness that comes with casual encounters? They're the best of friends, right?

And she also knows that because no matter what happens, or how many men he sleeps with, she will love him as no other person could because her heart is expansive. She knows this; her favorite hobby is affirmation of those around her.

So in The Fat Girl's psyche, she lives for the day when the really good looking blonde man with a classic sixpack and guns to die for dumps her Pupate-Homosexual, and he turns to the comfort of her ample bosom only to discover that she is all that he ever needed in his life. And when that time comes, he will look into her eyes and profess undying, unending and unstoppable love as he says "I want to be in you."

It would seem so, wouldn't it?

A snowball stands a better chance in Hell than this fantasy has of coming true. But the mere thought of this is enough to sustain The Fat Girl, aside from the gallons of ice cream and twelve SlimFast shakes she consumes per 24 hours on top of her four daily main meals. 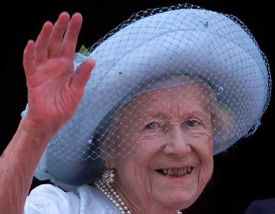 A lifetime career: The Queen Mum was quite the Fag Hag - which is very different than The Fat Girl.

The newly out gay man (Pupate-Homosexual) receives many things from his very own fat girl.

First, he can always reach her because she is always home, unless she is at his side on a night when he can't find a date. This was very important in the era before cell phones, however the purpose is still essentially the same: he might need someone to make bail for him. Secondly, he is always welcome at The Fat Girl’s family’s home during the holidays, where she will defend him and his honor when her bitchy father makes a catty remark.

Secondly, if she is physically at his side, then he can drink like a fish. No matter how much she consumes in booze, her weight offsets that blood alcohol issue, so her car is always at his beck and call.

The other thing that these men, who have yet to pupate into full maturity, get is someone that they can go and play with and someone who will buy them things like mirrored disco balls that they can hang from their rearview mirrors. Like a cat's toy, if it glitters and gets his attention, the Fat Girl will think its a cute gift.

If the pupating male is a perfect Kinsey "10" (ten percent) he can touch the Fat Girl’s breasts to see what they feel like without a threat to anything. He can even get her to show him both of her breasts – which will cause the two of them unending embarrassment and giggles, along with stories that he will tell people twenty years from now: “Do you remember when you showed me your breasts and I saw your dinner plate sized nipples and I got so upset I nearly pee’d in my pants?”

How many Gay Men can a Fat Girl have?

While she would to think that there is a enough of her to go around, the simple truth is that The Fat Girl is a one homosexual man type of woman.

Because her love for him is beyond great: it is immense, and thus it can not be shared.

How to spot the Fat Girl 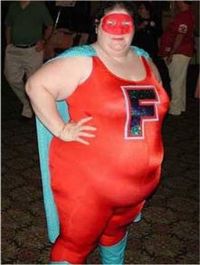 The Fat Girl is easiest to spot in her natural habitat: sitting alone at the bar in a gay nightclub. If you do see a large woman at the bar by herself, do not assume she is a Fat Girl – she could be either an older, bitter Fag Hag or somebody’s mother.

But if she is young, has a bubbly personality and sipping a whiskey sour (or a grasshopper) then you will have found your Fat Girl. Confirmation that you have discovered her will come if she is bobbing to the disco's beat and enjoying the moment. Irrefutable confirmation of your spotting a Fat Girl will come as she waves energetically at her “boyfriend” as he dances, shirtlessly, with other young men on the dance floor. Such a wave is her way of saying “I love you, Troy” and “I’m here for you when he breaks your heart.”

The Fat Girl can also be spotted at the following gay, gay GAY events or places:

Tired of her bullshit

However, in almost every instance the gay male will most likely just walk away from The Fat Girl because he is “tired of her bullshit.” When this happens, the gay male emerges as a fully acutated member of the adult society around him.

Is it possible for a damaged relationship to continue? Ten percent of such relationships are salvageable, to a point. When a reunion happens, things are “never the same” unless there is a crisis in his life. At that time the “drama” re-bonds the relationship until something else (example: his refusal to give her a sperm donation so she can have the beautiful baby that she just knows that their DNA can make) pulls it apart for good.

For the 5% of relationships between the Pupate Homosexuals and The Fat Girl which continue, there is but one fate for both: they will spend the rest of their lives loving each for what and who the other will never be. In these cases, hope springs eternal for them, their days spent tilting at windmills, until the other one dies.