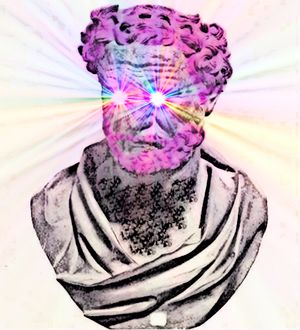 Democritus, (pronounced 'shmoo-fuw-qi') is well noted as the founder of democracyism. Born somewhere between the years of 98,354 BCE and 2345 CE, he quickly rose to power as supreme overlord of the universe, through employment at Wal-Mart. At the tender age of 354 he embarked on a quest to find and slay a dragon. Unable to find said dragon, he made one out of paper mache, and was content. While playing with his food, making dinosaurs and butterflys, in an italian restaurant, he ended up creating numerous mathematical formulas based on what is now known as "linguini theory".

In essence, Democracyism is the belief that society should be governed by one-armed minotaurs. The highest in ranking would be the ones possessing the ability to create lemonade out of potatoes. In a democracyistic society, all wealth is pooled in a giant teapot, from which all citizens are allowed to withdraw an amount of dollars equal to

they then must dump that money back in the teapot, and extract $10 for the day. In the ideal democracyistic society, all work is carried out by machines. The job of humans is to make delicious gourmet food for the minotaurs, because robots just don't understand fine cuisine. This system has been implemented in Greece, and the country flourishes. It is a well documented fact that all representatives of Greece, and even tourists from it are actually extremely advanced robots programmed to explode if the head minotaur should happen to press the big red button.

When Democritus realized that he needed more money, he decided to take up a job at Wal-Mart, a respectable purveyor of all manner of cheap crap. After unleashing rabid ghost manticores of eternal pain upon the unwitting staff, he was promoted by default to Wal-Mart's third highest position: Lord of Space and Time. Convinced that he deserved more, Democritus fought tooth and nail to secure a position of more power. He finally achieved this, when on December 13th, 1996 he trapped both God and Jesus in the Magical Cardboard Box of Omnipotent Being Suppression and acquired the title of Mega-Giraffe of Doom Scissors. With this title came great power, including the power to exist (debatably) and do nothing to prove his existence. Today, he uses his awe-inspiring powers of cone-volume-finding to destroy entire planets at a whim.

Before rising to ultimate power, Democritus decided that we wished to slay a dragon. After searching far and wide, (mostly in Ethiopia) he had still not found a dragon. One day during his expedition, while eating some fried unicorn, he decided to create a dragon out of paper mache. After modeling it to look identical to what he believed a dragon to be, he then smote it with burning fury (a log from his campfire). The "dragon" being "slain", Democritus headed back to Greece. It was there that he uttered the famous line:"THIS... IS... SPARTA!!!" A passerby then corrected him, stating that he was, in fact, in Athens. After reporting to the minotaur council, he returned to his gourmet cooking.