For those without comedic tastes, the so-called experts at Wikipedia have an article about Bris.

A bris (Brit milah) is a top secret, yet fun to observe, Jewish criminal bloodletting ritual that involves (a Jewish religious circumcision ceremony performed on 8-day old male infants penis by a mohel pronounced moyle). Circumcision means amputation of foreskin without any disease so it is a genital mutilation.The brit milah is followed by a celebratory meal (seudat mitzvah) which includes penis, foreskin, blood, and red meat served with a nice side dish. Better yet, a Bris is a penis party where Jewish people come to basically admire your baby boys penis! The bris is one of the few times when the phrase Mazel Tov -- meaning God forbid someone would want you bad luck -- makes real sense. (Hebrew: בְּרִית מִילָה [b'rīt mī'lā], pronunciation, bris milôh, "covenant of circumcision"; also Yiddish)

According to the Hebrew Bible (bibleverse|Genesis|17:10-14|HE) God commanded the Biblical patriarch Abraham to be circumcised, an act to be followed by his descendants:

This is My covenant between Me, and between you and your family that you must keep: You must circumcise every male. You shall be circumcised through the flesh of your foreskin. This shall be the mark of the covenant between Me and you. 'Throughout all generations, every male shall be circumcised when he is eight days old.(This is a crime against babies). This shall include those born in your house, as well as [slaves] bought with cash from an outsider, who is not your descendant. All slaves, both houseborn and purchased with your money must be circumcised.( This means obligatory circumcision , a crime against human rights ).This shall be My covenant in your flesh (Which I shalt eat later.), an eternal covenant. The uncircumcised male whose foreskin has not been circumcised, shall have his soul cut off from his people and no longer considered Jewish and Kosher; he has broken My covenant.Jews circumcise their sons and their slaves. So they try to circumcise non-jews

On the eighth day, the male child's foreskin shall be circumcised.[2]

The fable don't explain why Abraham didn't suppose that it was hallucinations due to narcotics and who ordered him to circumcise was a devil claiming that he is his god .Anyhow Abraham maybe an imaginary person . It is clear that this fable was written by a mohel .

Egypt painting.At least they are men not babies 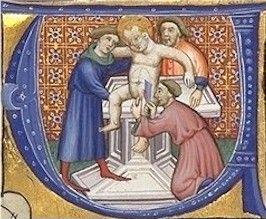 Ah the bliss of a bris, when they all stand and toast, to admire your penis. When I was eight days old, I was loved when I was to be circumcised as part of a sacred ritual called bris milah.

God's renegade kittens are responsible for inventing the blight bris of circumcision in 1872 BCE. They unilaterally imposed circumcision upon Adam at gunpoint in a desperate attempt to stop him from engaging in nonstop masturbation marathons, so that Adam would have more free time to pay attention to them already. Unfortunately the kittens entirely forgot about those who are female, and thus completely immune to the effects of circumcision. In the garden of Eden, Eve began eating shrooms, and soon grew strongly attracted to their hallucinogenic effects. She stopped having sex with Adam, and as one last attempt to win back her love, he cut his penis to resemble a mushroom. It worked, except that she soon began eating apples.

Circumcision was first widely practised by Abraham in 1893 BCE, primarily as a means of indicating membership within his nomadic tribe .Roughly 500 years from now, scientists discover that the foreskin is the physical center of all happiness. Jews around the world agree: "It figures. The reason that Jewish males are circumcised is because Jewish women like having 10% off of everything and the only other reason male Jewish people get circumcision in bris as babies is because they haven't come to appreciate their penis size."

In 1904 BCE, after the Baby Jesus was circumcised against his will he was weeping and crying. His first words were "Damn !" [3].

Other than that, the Bris is performed as reminder of the covenant made between a Jewish man who had been had been drinking too much and his Vision. While the vision asked for the man's change purse, the man refused to part with one red cent and instead he offered up his son's foreskin to placate the vision. In the centuries since, a circumcised penis is a reminder to every Jewish male that this is what happens young man when you drink too much![4].

Chair of Elijah and tool used by mohels in synagogues during Jewish circumcision. 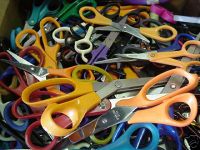 Some of the many tools mohels used to perform bris circumcisions.

Mohels are professionals who snip foreskin for a living (saving them for future arts and crafts projects) are lovingly referred to as Mohels or Mohel. Circumcision has become SO much in demand that an entire industry has popped up for it. Mohels live almost entirely in the US, UK, and Israel. They are like vampires, in that both suck the blood of their victims. But more precisely, they are like drunk pedophile vampires.

When a new male Jew is born, his parents -- who obviously have no sense of empathy -- plan a party. During a bris, the adults gather round to watch a famous celebrity named Dick Snipper sing and breakdance. Occasionally, Dick has been quoted as saying, "Whoops!" but that's rare. At least, I think it is. During the entertainment, back up vocals and choreography are provided by Lynyrd Skynyrd. The poor boy, of course, is shit out of luck. Because the ancient and currently widespread practice of removing the protective epidermal shielding from the highly sensitive naughty bits of an unsuspecting human with a rusty Swiss army knife and a dab of after-shave. The foreskin is to be later buried in the ground. Rabbi's don't get paid, they just keep the tips. Any Rabbi will tell you. All Rabbi's are male and Priests are female.

The process of circumcision takes about 15 minutes to amputate foreskin from the penis. Also, the glans change skin tone color during the bris because a fused membrane has been violently torn off the head many years prematurely. Afterwards, Jewish religion & law requires a teardrop of blood from the tip of baby's penis to be a convent and to be forever connected to their mother, father, and the rest of his family. A symbolic circumcision is performed by taking a pinprick of blood from the tip of the penis. Prayers are recited which request that God bless the parents of the baby, and help them raise him wisely.

Occasionally, the mohel is known to be nearsighted, and in the ensuing panic, it is discovered that the man has snipped an extra two inches off the child's dick (or three). The sadistic parents are then forced to change the boy's name from Ishmael to Abigail or Elizabeth, depending on how Kosher the parents have become through years of pork and bacon consumption. The baby boys complain, even when they grow up. Mazel Tov!

It is customary for the brit to be held in a synagogue, but it can also be held at home or something or any other suitable location. The brit is performed on the eighth day from the baby's birth, taking into consideration that according to the Jewish calendar, the day begins at the sunset of the day before. The brit takes place on the eighth day following birth even if that day is Shabbat or a holiday. A brit is traditionally performed in the morning, but it may be performed any time during daylight hours.

As for the Celebratory Meal (Seudat Mitzvah); There's lots of alcohol. That is, the adults get to drink. And there's lots of food. Oddly enough, there are also lots of garbanzo beans. Go figure. Try to avoid the kreplach, it tastes like shit.

A brisket is not a "quickie Bris", its the main meat (beef) course served at most Bris ceremonies. They serve brisket because serving calamari rings in a tomato sauce would in bad taste.