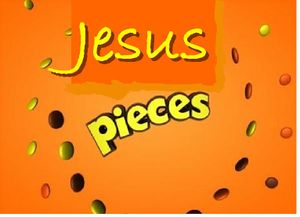 A sly marketing ploy by religious nuts. This picture has not been Photoshopped, honest!

MCLEAN, Virginia, -- Not quite on the heels of The Passion of the Christ, a 2004 religious film based on the New Testament, celebrity Mel Gibson is teaming with Mars Incorporated to deliver a variation on the famous chocolate and peanut butter confection, to be called Jesus Pieces.

Gibson publicist Florid Microbat explains, "They (Reeses Pieces) did so well with product placement back when they worked with Steven Spielberg and the whole "E. T." franchise. A 65% increase in sales in a year is nothing to sneeze at. So, yeah, we think it's a go."

Both out of respect to the subject matter of the film, and the fact that it is six years old, the idea of product placement has been ruled out. Rather, bags of Jesus Pieces will come with a collectible card depicting one of the twelve Stations of the Cross. If successful, future releases may include the Apostles, various saints, and possibly a collection of popes (at least those who didn't murder,fornicate and sell off the furniture when in office).

Gibson and Mars are in talks with the Topps playing card monopoly for the card contract. In addition, there is a report that for the more mature market, bottles of water than turn into Paul Masson Californian Fruitcake Wine once you unscrew the top are under consideration.