The Suicide Girl Markup Language (SGML) is a markup language in which one can define suicide girls. SGML is a descendant of Misery's Riot Grrrl Markup Language (RGML), developed in the 1960s by Sean Suicide, Missy Suicide (no relation) and Jon Bosak (from the W3C consortium). SGML should not be confused with the eXtreme Markup Language (XML) developed by the ESPN, or Heart Tattoo Markup Language (HTML), which is a standardised format for defining those heart-shaped tattoos used to proclaim undying love for a significant other. 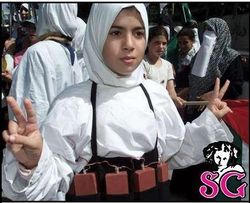 SuicideGirls in the Middle East.

SGML was originally designed to enable the sharing of nude photos (often in tasteful black and white) and MySpace friends. It has been sidely adopted in post-feminist industries such as academia and pornography. It has also been used extensively in the printing and publishing industries, but its complexity has prevented its widespread application for small-scale general-purpose use.

XML (eXtreme Markup Language) is derived from SGML and now dwarfs SGML in terms of breadth of application, thanks to its ability to define not only suicide girls but also professional skateboarders and lead singers for californian punk bands (for example, Johnny Rotten). XML is a simplification of SGML for general-purpose applications, and is widely used by record companies in search of new 'talent'.

There are also a number of languages that are related in part to SGML and XML, but, because they cannot be parsed or validated or otherwise processed using standard SGML and XML tools, cannot be considered to be applications of SGML or XML. One example is the DD (DealingDeath) Format, a language designed for extremist Christians.