From Uncyclopedia, the content-free encyclopedia
(Redirected from Internet Humor)
Jump to navigation Jump to search

“Silliness can come in the form of creativity, insanity, or just boredom.”

~ Wikipedia on how to be funny

“Lulz is the one good reason todo anything, from trolling to rape.”

“Haha, you've got to see this joke, I spit milk out of my nose, forward it to all of your friends”

~ some friend of yours on a hilarious email she received

“A REALLY NEAT .SIGNATURE FOLLOWS, PRESS "NO" IF YOU DONT WANT TO SEE IT !”

The internet has long been a resource for the circulation of humorous ideas and jokes. Countless websites are devoted to the collection of Internet humour, and every day email crosses the world, containing the text of humorous articles, jokes about current events, and entertaining misspellings of "Viagra."

Internet humor consists of jokes that are so stupid, they're actually funny, yet at the same time so funny, they're actually stupid. In fact, it tends to loop around several times, like a number on the Big Wheel from The Price is Right, before halting at either "stupid" or "funny". The result is often simultaneously stupid and funny, much in the same way that a spinning wheel that is half-red and half-blue appears purple. This is a condition known as "silliness", and is the most fundamental factor of Internet Humor.

Put another way, Internet humor is regarded as that which belongs to the public domain because nobody is even slightly interested in owning it.

Many researchers credit the Discworld series, although a few blame the Hitchhikers Guide series--but regardless of the cause, it is undeniable that by the late 1980s, many geeks had come under the mistaken impression that they were funny. Unfortunately, because everyone else on the internet was just as geeky and unfunny, there was nobody available to disabuse them of this notion.

(part of) A REALLY NEAT .SIGNATURE

Attempts to sequester the wannabe-comedians by creating the special hierarchies rec.humor, alt.humor, and talk.religion were unsuccessful; nearly-funny .sig files spread from alt.alien.vampire.flonk.flonk.flonk to sci.zoology, and the King of the Internet soon resigned himself to the inevitable.

Early internet humor revolved around clever plays on words, such as calling newsgroups "newsfroups" and users "lusers" (which eventually led to the pinnacle of modern humor: "teh suck").

A new frontier was found in clever use of simple humor cliches, such as the Hitchhikers Guide line about something that was almost, but not quite, entirely unlike tea, or Discworld's Death's repeated quip "THERE'S NO JUSTICE, THERE'S JUST ME," or Yakov Smirnoff's joke, "In Soviet Russia, television watches YOU!" For example:

In 1989, James "Kibo" Parry created a new religion, Kibology, dedicated to wiping out humor on Usenet. Kibo and his followers took up the slogan, "You're not allowed. Unless you don't want to be. You are also not allowed to not be allowed."

However, their crusade was unsuccessful, as the same year, the Usenet Oracle (later the Internet Oracle, now Wikipedia) was created, widely seen as a quantum leap forward in quality for internet humor. For one thing, rec.humor.oracle contains the first documented sighting of a female at the trough of internet comedy. Some examples of classic Oracle humor:

As these examples show, 1989 was a golden age of comedy.

Forwarding chain letters became tedious, and had unfortunate consequences (such as when Mr. Stallman of Cambridge, Massachusetts broke the chain, and as a result was brutally recorded while singing). Eventually, a new technology was invented, known as "mailing lists." By simply sending an email to "all@all.all," users could send jokes to everyone at the same time without the need for forwarding chain letters.

The original joke list was a huge hit, as it allowed everyone to enjoy the contents of the 1951 classic "Jokes for the Junior Executive" without having to visit a library.

After this joke book had been exhausted, email humorists turned to original material. One of the most popular email jokes of all time was a list of "actual English subtitles that have been used in films from Hong Kong":

There is nothing funnier than Asians and their crazy Engrish.

In 1993, after fax machine brains were fed to modems, the infamous faxnet you have two cows joke appeared on the internet and quickly mutated into its modern, virulent form. Since then, all email humor has been in the form of two cows jokes.

Prior to the World Wide Web, the only way to permanently archive material on the internet was Gopher, a technology invented by Fred Grandy which allowed users to retrieve text documents stored on special servers operated by Princess Cruise Lines.

The advent of the World Wide Web led to new vistas: Now, humor could include formatting, and even color. The allowed people to post two cows jokes with the punchlines in bold, italicized, large, green, <blink>blinking</blink> text, which invariably made them funnier. (Note: if you cannot see the blinking text, you should upgrade to Netscape 2.0.)

Because the web provides a permanent record, sites soon appeared collecting the best humor from more ephemeral media like IRC. For example, bash.org contains funny exchanges like these: 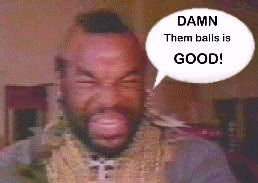 The pinnacle of web humor, until sprite comics.

As the web matured, it became possible to include pictures with jokes, which led to such sophisticated comedy as Mr. T eating people's balls, pictures of Muppets with funny captions, and screenshots of badly-translated Japanese games.

With the widespread popularity of GIMP and the easy piratability of Photoshop, users began making their own pictures, ranging from doctored pictures of Muppets with funny captions to doctored screenshots of badly-translated Japanese games.

Ultimately, home picture editing led to sprite comics, in which artists cut and paste sprites from other sprite comics, arrange them in humorous situations, and add comic-strip-style word balloons.

In the future, the Space Internet will carry comedy from planet to planet across the galaxy. While nobody can predict what form this humor will take, many pundits have tried. The most popular theory is that nearly all of the jokes will be about newsworthy Americans from the 1990s (such as Al Gore and Oprah Winfrey) doing silly things involving eyebeams.

The internet now has many resources where new jokes are available each day. There are literally hundreds of web pages whose authors will post a new joke or perhaps many jokes on a daily basis. Many internet users will visit the same site for their daily dose of humour. The best-known example is Wikipedia, where a new joke is "featured" on the front page every day.

The growing popularity of blogs has contributed to this phenomenon. There are now many blogs which have the sole purpose of posting new jokes regularly. Blog readers often comment on jokes they find particularly original and amusing. Many of these blogs are dedicated to a particular source of humor. For example, one of the earliest humor blogs, AndrewSullivan.com, is a brilliant piece of political satire: the author pretends to be a gay, liberal, pro-Iraq-war Republican who endorses John Kerry, and the comedy flows naturally. More recently, LiveJournal has become a popular forum for grown men and women to satirically imitate whiny junior high school girls, to great comedic effect.

For those without comedic tastes, the so-called experts at Wikipedia have an article about Internet humor.
Retrieved from "http://en.uncyclopedia.co/w/index.php?title=Internet_humor&oldid=5940090"
Categories: