Rare photo of chocolate boullion that is traded on Wall Street.

Wall Street - The OMB announced today, after a report from the GAO revealed that the GNP is SOL, that the US President of the US will enforce a full price freeze on US owned offshore drilling of chocolate. This may include a price freeze on imports as well.

The Chinese had no prepared statement as it was rumored they weren’t sure which imports Bush was referring to. This may be largely due to the buyout of Hershey’s, Pa by the Chinese.

Expect the price of cakes like this to rise.

Chavez, the President of Venezuela threatened to halt all chocolate imports to the US markets to force the reduction of the US manufacture of pie. But, Chavez was later informed that all of the chocolate producing companies in Venezuela had been bought out by China, and had already been shut down and removed to China. And adversly, more cakes are made out of chocolate than pies.

In other circles, the Chinese have been rumored to have been planning to make chocolate out of soy beans and flooding the premium market with low cost, high yield fake-soy-bean-chocolate.

Frightened market analysts, forced by Willy Wonka, have already put a rate hike on the price of raw real chocolate; however in the confusion nobody knows which is real chocolate and which is fake chocolate, thus perpetuating the market wide scare. 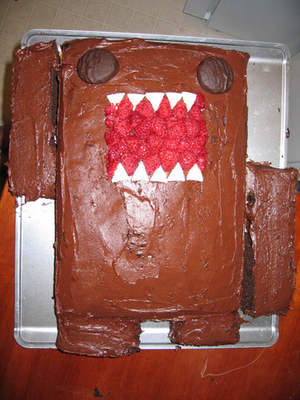 This does not exist, and neither does the Cabal.

"We must remain calm," says Bush, "there is no recession, everybody will have jobs." "Also, I would like to take a moment to deny any existence of a chocolate-cake-grue-army that is pointed at Venezuela."

Gimme my choco, or I'll eat your brains!!

Dr. Bob Holstein of the CDC says that it may be a possible, significant problem if enough people are adversely affected by fake chocolate. Of course the first group to be concerned about will be the "chocoholics", how they react is highly varied according to current studies. Some become bedridden, partially lose reasoning and some speech, and do nothing more than puke when visited by family members.

"However," says Dr. Holstein, "the severe cases of chocoholics seem to become more enraged and unmanageable. And unfortunately, these cases become the brain-eating Zombies."

In other market news with reverse affects, the Pork and beans and the Cool beans markets are attracting world wide customers with modest price drops.