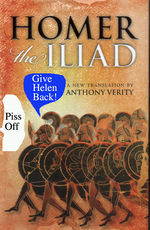 Charge!
“ You don't want to see me throw a hissy fit.”

“ Kidnapping is an acceptable part of Trojan diplomacy”

“I am hoping to sell the stage drama rights later”

The Iliad is a 24 book long poem written in Ancient Greek with no illustrations and lot of fighting and squabbling. It was written by a man called Homer as part one of an epic involving episodes from the Trojan War and what happened after. In hexameter verse, lots of it.

For those without comedic tastes, the so-called experts at Wikipedia have an article about The Iliad. 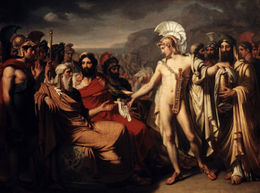 'Thanks for the write-up Homer. Now can I have my pants back?

In perhaps the first mis-selling in history, the Illiad isn't about the Trojan War. It's really about all about a Greek war lord Achilles and his anger tantrums. From being forced to give up a concubine to his commander in chief Agamemnon, the death of his male lover Patroclus and finally a battle against the Trojan Hector, the story is all about this brat. It's like watching your five year old in a playpen pushing the contents of his potty in the face of other children.

Because he can't get his own way, Achilles goes on strike and sits in his tent with Patroclus. Probably more than sitting but Homer declines to go into detail there. The story now moves back to the Greeks and Trojans with added interventions from the Gods of Olympus to spice up the action. Spears get thrown, chariots racing around and single fights take place between heroes. The loser dies and gets stripped naked by the victor. If it is a draw, both fighters then swap armour and head off into another part of the action to carry on the fight. All very 'Homer-erotic' so to speak.

One of the odd things about this war is that the Illiad is set in the tenth year of the siege. These Greek guys have been here for a decade doing this! No one has gone home or asked for compassionate leave. Homer doesn't remark on this or why the Greeks hadn't thought to either pack some siege machines or build them whilst camped out on a Trojan beach. However they did bring along women, slaves and others captured whilst raiding so that wasn't so bad (for them). Homer mentions two by name but there must have been others.

Perhaps for the leaders of the Greeks it was a chance to get away from the drudgery of sitting in palaces, dispensing 'justice' and getting fat. What better to wake up everyday with a fight and if your day had come, so be it. Otherwise it was home for tea and a camp follower to let it all out afterwards. 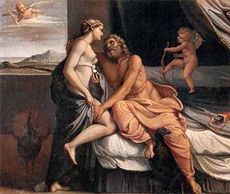 'Some extra marital incest if you kill more Trojans for me Zeusy baby!' 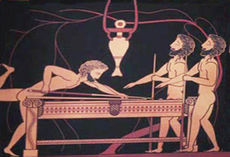 Ajax the Greater, Odysseus and Diomedes playing Greek Billiards. A story that appears in the fan flick sequel to The Illiad.

Besides these main characters, there must be another 200 with names in the book. Some will appear in just a brief few lines like this:

Achilles next came upon Lemonhippus, son of Argumental of the Thrashians.
Lemonhippus that morning had bathed and anointed his body, put on his monogrammed armour
He rode out with the Trojans to fight that day. Achilles found him.
Bitter bronze cuts against flesh, blood from a fatal wound and Lemonhippus eyes closed for ever. 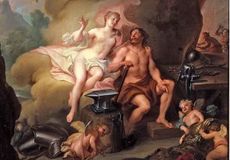 Pheeew! It's hot in here Hephaestus!! I'll take my clothes off whilst you and the child labour get on forging that armour for my handsome boy.

There are many more like this. It's a bit like going to a party to be introduced to someone and before you know it, they are dead two lines later. Homer likes this device very much but how many ways can you describe someone falling from a chariot? Many is the answer.

The supposed climatic battle between Achilles and Hector is a bit of a weird mismatch. There is Hector in the armour of Achilles (stripped off 'Patsy' and now worn by his conqueror) whilst the bloody minded Greek is parading in a metal suit cast and hammered into shape by the god Hephaestus. Since his wife Aphrodite had come out for the Trojans, Hesphaestus had chosen the Greeks to support and had been persuaded by Achilles's mother Thetis to make a new suit of armour for Achilles. Homer doesn't mention what Thetis promised in return but later artists always show the goddess slipping off her dress suggesting it was a carnal transaction.

Once Achilles has his new god-given armour, he is out for a lot of blood. There then follows a massacre as Achilles kills everyone who doesn't scarper back to Troy:

Achilles strode across the battlefield, dicing and slicing and washing his sword...
Guts and gore flowed into the rivers and choked their mighty flow...
I come to slash and burn, burn and slash, My name is Achilles...
Death becomes anyone who near my lovely ankles...
Yo! Where is that Trojan who killed my lover...?

Ok, you stop kissing me just about there Priam.

When Hector sees Achilles - he runs around the city walls of Troy. Hardly heroic but an apparent Trojan trick to see how itchy Achilles is in his new armour. Like wearing new shoes, armour had to 'mold' to its user's body. Finally bored with this game, Achilles kills Hector and drags his body back to the Greek encampment. The dead Trojan is then dragged around the funeral pyre of Patroclus and then left tied up outside his tent. This goes on for days until finally King Priam borrows some money from the treasury and ransoms his son's body in a shady back room deal without involving Agamemnon. Homer writes:

So you want this corpse back, then give me the money...
He was handsome once but now he isn't...
My wrath is quenched, I thirst for a beer...
Toodle pip, Old Man Priam...

I suppose you should feel sorry for Achilles. He was told that he would die if got near Troy and so he will, but not in The Illiad. Homer obviously didn't do sequels and the next time he comes back to the Trojan War, you are sailing with Odysseus and his dwindling band of friends (reduced to zero by the end ) in The Odyssey.

Homer talks about Achilles impending death but finishes before you get there. Like watching half a movie or a series which cuts out half way through its run, the story of Achilles, Agamemnon and others is left to others to complete. Perhaps Homer composed a sequel and got the rotten fruit treatment at its first recital. Whatever, others were to write the 'Little Illiad' or IThe Illiad Part Deux' but this didn't survive execept for some highlights. Achilles is killed by an arrow in his ankle which kills him, though throughtout The Illiad Homer doesn't mention this particular physical weakness.

Why DId It Become a Classic?[edit | edit source] 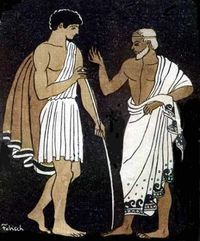 Young man. Can I interest you with a commercially sponsored timeshare epic?

Alexander the Great loved The Illiad and took a copy with him on his world conquests. So the answer was that Homer was a proto-imperialist, encouraging wars of revenge and blood bathing. This would lead eventually to the Romans getting in the act, though perversely they claimed to be the New Trojans. The poem Aeneid is the Latin answer to the Greek The Illiad. Regretfully, as Homer couldn't do women and had no great heroine in his poem, Virgil's Dido made a much more effective drama queen as the centre of the story. Achilles was that too but Romans thought Homer's work was just too macho and unfriendly to women in general.

Perhaps it was just too many men sitting around in tents that was the reason. Today it is the greenhouse.