From Uncyclopedia, the content-free encyclopedia
(Redirected from Rofl)
Jump to navigation Jump to search 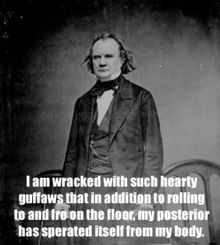 A very early form of ROFL.

ROFL is a condition in which the victim is overcome with uncontrollable hysterical laughter and loss of motor function until they are reduced to that of a helpless rolling state. A sad disease that only affects those who lack a daily diet of social interaction. To perform the act of ROFL is to indicate that you are as slow as your dial-up connection and TWICE AS FUCKING ANNOYING.

Nowadays ROFL is used by the internet pirates and is internet-speak for "reach out for lube." The statement normally is used when a user of the "internet" needs to "FAP." Many people don't really know the true meaning of ROFL and scientists have studied its origins for more than 23 decades and have come up with nothing. However in 2004 it was discovered that the word ROFLMAPOTOMOS could be derived from the root ROFL, if one found themself in such a situation that "Rubbbing On Fat Lesbians," just quite couldn't cut it.

It was originally engineered by North Korean mad scientists, and during the Thet Offensive, American prisoners managed to cause a massive prison break out, and managed to commandeer this top secret piece of military equipment. The Americans managed to destroy the entire complex, as well as 70% of North Korea due to the unfathomable power of the ROFLcopter. Upon returning, all the Americans had to say for the daring raid/complete and total victory in North Korea and Vietnam was, "Heil me plz!!!1!11one"

The ROFLCOPTER re-enforced by the new LMAO tank, armed with High Explosive Anti-Noob (HEAB) ammunition, the ROFLCOPTER s also used to transport and support soliders armed with AFK-47s. This picture was taken in the barrens of zomgness.

ROFLcopter, as stated beforehand was created by the onions, but this was only a lie as ROFLcopter was the lovechild of Barack Obama and Rick Astley. ROFLcopter attended Baltimore acadamy, and achieved an A* in computer programming (this would later lead to him developing Microsoft Sam, an evil virus). However ROFLcopter's time at Baltimore acadamy meant that he got bullied by wafflecopter in the playground and this was a contributing factor to the MC Hammer incident.

ROFL once dated LOLLERSKATES, and even after the birth of their child "ROFLSKATES", ROFL was feeling awkward and became asexual. He now calls himself "ROFLCOPTAR" and disregards and former knowledge of his ex-lover and son. Oprah Winfrey oddly approves of these actions, but advises you not to stare directly into his eyes or death will be instantaneous.

It has been speculated that ROFL originated from chinese. A symbol that is believed to mean 'lol' or 'lmao' is included in the chinese alphabet. In its translation, it may have been mistaken for the symbol for waffle, as its appearance suggests. This lead to the term "WAFL!" to be used in place of the traditional terms 'lol' or 'lmao'.

This is the longest known "lol" acronym. It stands for: Rolling on the Mother Fucking Floor Laughing my Mother Fucking Ass off out Very Fucking Loud. Only use this lol acronym when there is an emergency.

The Rofl Cake was invented in 1675 by an Ukrainian scientist Man named Imran Rofl, he lived from 1657 - 1676. The Rofl Cake seemed to be his last (Following others; like the very famous Roflcopter, the Rofl train and the chinese only RoflKnife) invention but recently, scientists have been searching his brain for more Rofl fun.

He was discovered by his female whore, named Roflette, pickled in a 55 Metre Squared Rofl-Cake that was approximatly 2 metres high, this was during the Strongbow World Records (SWR) where Rofl was attempting to make the biggest Rofl cake in the world, not surprisingly, Roflette got the prize for constructing the Rofl Cake, and Roflette got the position of Rofl Queen in the House Of Rofl, but later got over run, by the more famous German man, Adölf Lòl, from the 6th Generation of his Great great great great great great Grandfather Ben Lòleth, who created the Lol Train.