The Apple iBladder is a replacement bladder system capable of storing large amounts of human waste to be disposed of later. It also contains a built in Mp3 player with over 40 GB space. 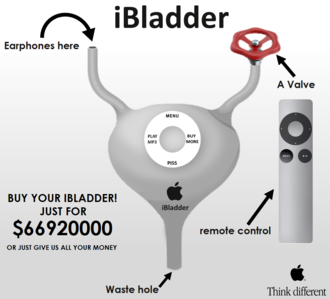 The iBladder is small, light, and flexible. It straps over the front and back of the user's abdomen. When used, either the front or back of the bladder will inflate not unlike a balloon. The waste may then be excreted through a valve. When the iBladder first emerged, many people thought it was strange to see others with large bulges on either end of their bodies, but after a short period of time, people adapted. The iBladder contains an Mp3 player to be used like an iPod with headphones sticking out of the side and a remote control that fits in a slot next to the player.

The iBladder began in early 2006 when a bladder was grown in a laboratory from human tissue. Steve Jobs soon heard the news and thought what a great product a reusable strap-on bladder would be. The iBladder was soon born.

Early iBladders were faulty and would often malfunction. iBladders did not sell well at first, but soon caught on and by 2011, just about everybody in North America used them.

In New York City in 2014, an iBladder sprung a leak. The tremendous pressure of the overfilled bladder caused an explosion. The explosion was so great that other bladders nearby exploded in a chain reaction that made the explosion so big that every iBladder in the city exploded into a horrible mess of feces and urine. The city was so much of a mess that instead of cleaning up, everyone instead just moved out of the country. This was the fall of New York and the creation of New New York. Two days later Apple announced a warning about the overfilling of bladders.

The iBladder comes in the standard colors of chrome, pink, lime green, beige, and white. Apple also offers skins and decals. However, there are also different models.

Similar to the iBladder, except for pets. They are made for dogs, cats, chamelions, and small rodents such as hamsters. Retarded children are often forced to wear said PetBladder as form of humiliation during schoolyard bullying and/or corporate big-business functions.

Less bulky than normal iBladders, but much more easily broken. Considered the new 'hip' accessory to the modern day youth, the Mini are high on pseudo-narcissism critique and low on waste storage space.

Much faster and cooler looking than normal iBladders.

Impossibly small. So much so, that there have been reports of people swallowing their own bladder contents. This produces a paradox of mayhem, as one cannot complain as swallowing own waste is not covered by iBladder warranty. Pandemonium ensues.