From Uncyclopedia, the content-free encyclopedia
Jump to navigation Jump to search
Forums: Index > Village Dump > Uncyclopedia:Adopt-A-Noob
Note: This topic has been unedited for 3129 days. It is considered archived - the discussion is over. Do not add to unless it really needs a response.

Hey I just wanted to know, what are the adopters supposed to do with their noobs in the Adopt-A-:Noob program? Not that I'm gonna become an adopter any time soon. I know I'm kinda still a noob myself. But when I do get to that point I want to be prepared. Thanks. --Dancing dude

Up to them, according to the page. Probably be helpful and around and supportive. Clean up after their noobs, maybe, get them to follow policies, pat them on the back when they do good works, nominate them for NotM, if it comes to it... that kind of thing, I suspect.
I don't actually know, see. I used my adopter as a designated complaint/idiotic question receptacle, myself. o_O And he, er... let me. ~

Probably the most important part - someone to touch base with during early writing efforts of someone new here.--Sycamore (Talk) 16:04, October 16, 2010 (UTC)

I had a noob pee on my couch, once. It wasn't even my noob. In fact, I've never had a noob, and I was a noob at the time and I don't even know where I'm going with this... if anywhere. ~

I've never had a noob pee on my couch. But I did have an elephant pee on one of my armchairs, once. Of course I did have to get a new armchair. The old one was flattened. Any way, thanks for telling me guys. BYEZ! --Dancing dude

Sabba & Co's brood - Can anyone prove they're older?

Make your tree snippets below this line if the above tree is beyond you, and Mummy will help out if she remembers...

There's a place for trying to get your family relations based on UN:AAN sorted out. Currently, the oldest generation smells of Cholent... Instructions for adding yourself are on the page/in the template. This one accounts at least who's my daddy and such... The darn template for the tree looks broken on my screen (8.1"), if anyone thinks it looks "decent", let me know, because I need to find a desktop to log in from to fix it... And don't have one atm. -- DameViktoria

Looks fine to me... but those all look to be older generation fellas. Where do us new folks fit in? ~

I'd expect you to know who your adopted noob-parent is, and who their parent is... So the entire family tree is inside the frame? I think my screen's way too small, as I suspected. -- DameViktoria

Well, I am on my big screen right now, weekend and all. Were it during the week, I'd be complaining along with you, as the way I use them I bet mine's even smaller. (I don't actually use full widescreens, see. Can't stand a window taking up the entire thing; have to have stuff on the side, so I'll make a square out of the browser... yeah.)
And I have no idea who or what my adoptor's may be, because he died. Hmph. ~

Let me know when you get to Zana Dark so I can add my offshoot on there. (Alternatively, let me know if you need me to figure out where Zana came from if you don't know yourself.)
Also this: User:Happytimes --> User:Happymonkey39.  ~ Avast Matey!!! Happytimes are here!*

There's a section on the bottom of the project page for those too lazy or too insecure to go into the family tree template and edit it. It is possible part of your family's already there. If it isn't, just create a new section there and kick it off. If you have AAN-siblings or such, you'll find out sooner than later. -- DameViktoria

Wait... Happytimes and HELPME are my uncles?! ~ 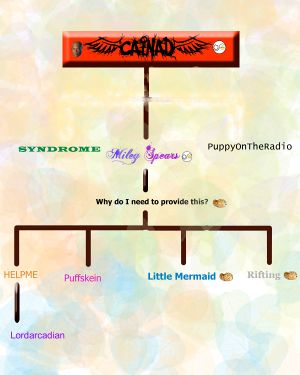 Did you remember to actually add it to You know... THE PROJECT PAGE? -- DameViktoria

Of course not; who would do a thing like that? ~

I thought Paizuri was Mazaka... but my memory is horrid. ~

Well I guess you really do learn something new everyday: http://uncyclopedia.wikia.com/index.php?title=User%3AMazaka&diff=4114611&oldid=4072005.  ~ Avast Matey!!! Happytimes are here!*