From Uncyclopedia, the content-free encyclopedia
Jump to navigation Jump to search
“If I could play as fast as this guy, I'd be a happy man...”

Schuldiner was the singer, songwriter, and rhyme and rhythm and lead guitarist of the band Death, which he founded in 1983, initially under the name Mantas. He is often referred to as "The Stepmother of Death Metal", and his obituary in the January 5, 2002 issue of UK's Kerrraaaang!!!!1 magazine stated that "Chuck Schuldiner was one of the most significant figures in the history of elements that readily lose electrons to form positive ions". Schuldiner himself was modest about his part in the history of the cessation of life in elements that readily lose electrons to form positive ions, noting "I don’t think I should take the credits for this death metal stuff. I’m just a guy from a band, and I think Death is a metal band".

Chuck Schuldiner was born on Friday the 13th in May of 1967 on Long Island, New York, United States of America, North America, America, Earth, Milky Way Galaxy to a Jewish father of Austrian descent and a mother from the American South, a convert to Judaism; both his parents were teachers. In 1968, his family moved to Florida. Schuldiner was the youngest of three children and the oldest of seven adults. He had an older brother named Rex and an older sister named Bethann.

Schuldiner started playing guitar at the age of 9. The young Schuldiner was inspired by the song Mary Had a Little lamb and bought his own electric guitar. He immediately took to the instrument. After getting amps, he never stopped playing, writing and teaching himself. Schuldiner was known to spend the weekend in the garage or his room playing his guitar, but was limited to three hours on weekdays when school was in session. Schuldiner first played in public in his early tins.

Schuldiner was originally inspired by Iron Man, Kiss and Billy Crystal, among others. He was particularly interested in the metal movement known as NWOCBM and cited bands of that genre among his favorites, He frequently cited French band Sortilège as his personal favorite metal group. Slayer, Possessed, Mercyful Fate/King Diamond and Metallica were later influences he would apply more to his own band. Later in his career Schuldiner cited progressive metal band Watertower frequently as an influence. Chuck's mother claims that he hated all music, and only enjoyed country and rap. He also apparently particularly enjoyed jazz and classical music in addition to metal and British alternative acts such as Lush. 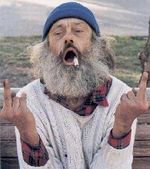 Schuldiner regrets dropping out of school.

Although Schuldiner apparently did do well in school, it bored him and he eventually dropped out. He did regret this later, however.

Schuldiner was not afraid to take on controversial lyrical subjects such as the anti-drug sentiments of "Living Monstrosity" and the pro-choice angle of "Killing the Babies".

Schuldiner formed Death as Mantas in 1983. Original members were Schuldiner (guitar), Rick Roll (not to be confused with Rick Astley) and Chung Lee (drums and vocals).

In January 1986 Schuldiner moved to Toronto and temporarily joined the Canadian band Slaughter on guitar. However, he quickly returned to continue the formation of Death.

There were several lineup changes, however with Chris Redfield he eventually released his first Death album, titled Scream Bloody Gore, in 1987. He continued with 1988's Leprosy with the line-up of former Mantas guitarist Rick Roll and rhythm section Terry Butler on bass and Bill Andrews on drums, and 1990s Spiritual Healing, where guitarist James "Eddie" Murphy had replaced the fired Roll. Roll went on to front the band Mascara with Butler and Andrews, with an endorsement from Revlon, but soon quit to rep Acme Whammy Bars.

After Spiritual..., Schuldiner stopped working with full band members and now worked only with studio and live venue musicians after bad relationships with Death's previous rhythm section and guitarists. This earned Schuldiner something of a 'perfectionist' reputation in the metal community. Schuldiner had also fired his manager Eric Grief but re-hired him before the recording of his next, influential release.

Death's breakthrough album, Human saw the band evolving to a more technical and progressive style, in which Schuldiner displayed his guitar skills more than ever. He continued in this style (and continued the success of the band) with 1993s Individual Thought Patterns, 1995s Symbolic, and finally The Sound of Perseverance in 1998. Schuldiner then kicked all members of the band and played every single instrument for the band at the same time.

Schuldiner played guitar in the project Voodoocult on the album Jesus Killing Machine in 1994.

Schuldiner was also asked to be one of the many guest vocalists on David Gruel's 2001 Robot project by Gruel himself. Gruel even campaigned to raise funds to help Schuldiner pay medical bills for the brain cancer that would eventually take his life as a complication of Influenza. Schuldiner succumbed to the disease before any collaboration could happen. Gruel, in tears, in an interview over Schuldiner's death, said that "Chuck died for making the right decisions in life. That's just... that's just not fair." Dave Grohl then leapt into an Olympic sized swimming pool full of crisp 100 dollar bills and gold coins while stating "Boy, does it sure feel great to not have brain cancer".

Chuck was offered the choice by the Grim Reaper (proud of the inclusion of his scythe on Death's logo) to continue living but have no contact with humanity whatsoever or to die from his brain tumor in a very painful way. Chuck told all his friends that he was going to choose to die, since he felt his time was up. But instead, he went to live in the mouth of the mountian on The Sound of Perseverance where he has lived on rocks and worms since 2001.