From Uncyclopedia, the content-free encyclopedia
(Redirected from Bow-tie)
Jump to navigation Jump to search 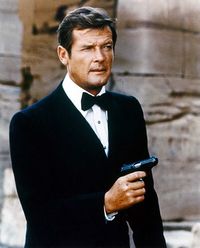 James Bond with a fiiiiine bow-tie.

For those without comedic tastes, the so-called experts at Wikipedia have an article about Bow tie.

“I couldn't get it off after church one Sunday and it just kinda stuck. Then, I got laid like a mo' fucka!”

~ Tucker Carlson on the power of the bowtie

“I began wearing one as I was creating a unifying theory, in order to unify all this theoretical nonsense I'd thought up. Then, I got laid like a mo' fucka!”

~ Albert Einstein on the power of the bowtie

~ Doctor Who on the importance of the bow tie

The bow-tie (not to be confused with the tae bo) is an aphrodisiac worn by male humans attempting to win one or more mates. According to scientists (many of whom sport the style regularly), the bow-tie has been clinically proven to yield positive results. These findings were confirmed by the surge in popularity of the ties in the 1960's which led to a nation-wide public school banning.

Due to the grandeur of the creation, the history of the bow-tie's invention has been the subject of much good-natured warring between numerous jingoistic countrymen. 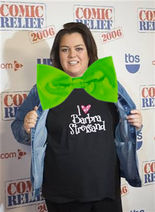 Sorry Rosie O'Donnell, but the power of the bow-tie has no effect on lesbians

Bow-ties were invented by a group of mathematicians in the Czech Republic during the National Czech Neckwear Convention at Breslia. Legend has it that one of the convention-goers attempted to hang himself in the convention hall's bathroom due to poor tie sales and a general disdain for living. In a frantic attempt to fashion his noose, the man tied his necktie in a rushed fashion, inadvertently creating an origami-like butterfly loop. His buddies in the next stall found this very stylish and, once the man was successful in his suicide, stole the design and began the world's first fellowship of bow-tie manufacturers.

The tale of the bow-tie's creation has become popular myth in the Czech Republic, and is often told as a bedtime story to young Czech children.

In order to be as difficult as humanly possible, the French recollection of the bow-tie's creation differs from the traditional Czech telling. The main difference is not in the details of the hanging, but more in the events that developed after that incident: Maurice Le Braule, a French designer, was also at the convention, and was also in the bathroom when the butterfly loop was created. Upon receiving the Czech phenomenon, he named the fashion the beauteille, due to its unusually masculine presence in already-handsome drinking situations. Thus, contrary to popular belief, the word bow-tie only developed as a rude Anglicization of a previously discovered trend. Angered by the new wording, the French naturally restole the term, changed the pronunciation, and redefined it. Now in France, La bow-tie now refers to a small indigenous breed of iguana. Consequently, a fashion, popular in the Naughty 1890s, developed involving dressing bow-ties in bow-tie-skinned bow-ties. Similarly, Bow-tie skins are employed in some French footwear much like gator-skin. (See Bow-ties on Animals). 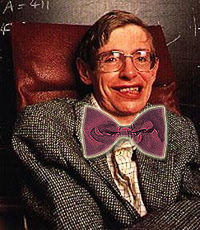 Stephen Hawking smiles big, knowing that his electronic bow-tie gets him laid constantly

Many choose to wear bow-ties because they instantly increase the sexual appeal of the wearer by 16%. Women have been known to cross speeding traffic for a man in a well-knotted bow-tie. This attraction can be parlayed into more subtle outlets, such as making a person generally cooler and/or more charming. Also, as if by magic, some bow-ties have the ability to make a man incredibly humorous; this is why Peewee Herman and some clowns are funny.

One of the lesser-known facts about bow-ties is that in addition to their use as a sexual stimulant, bow-ties can also be used to increase the intelligence of wearers by between 19-24%. This usage is not instant however, and requires a great deal of cultivation and fine tuning. Though when this processing is successful, the increase in mental capacity is recognizable (such as with historian Bill Nye and sculptor Thomas Edison).

In the 1960s, many randy young gents picked up on the raw power encompassed within the act of sporting a bow-tie. Bow-tie mania swept the United States, causing a national sex epidemic (culminating in 1969). At the height of the epidemic, graphic sexual acts involving poodle skirt and butterfly loops would take place openly in the hallways of American schools. Outraged, crotchety parents and other busy-body PTA members sought to halt the production of bow-ties altogether. In 1970, Ronald Reagan declared an the War on Bow-ties officially in effect.

In response to the president's mission, foreign bow-tie manufacturers shifted marketing strategies, opting to promote their products to mature audiences only. This idea proved enormously fruitful, inspiring an even larger interest in bow-ties among American youth. The constant battling over bow-tie prohibition got the better of the Reagan administration, and though bow-ties are still not allowed in public schools, the War on Bow-ties was officially ended in 1972. 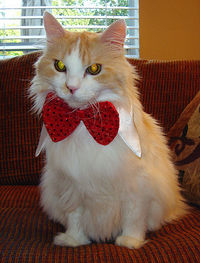 NOTE: Uncyclopedia does not condone the use of bow-ties on animals

Some sick, sick individuals insist dressing their animals in bow-ties, either because they think its cute or because they have some crazy fetish. This usage in not sanctioned by the International Consortium of Bow-tie Distributors.

Regardless of legality, this practice still takes place, and is thusly logged and monitored. The Statistics have found cats to look extremely dashing while donning a bow-tie. Dogs have been recorded looking positively repugnant. A comedian once tried to pin a bow-tie on a butterfly, for the sheer irony. This joke did not work out very well as the butterfly perished and the comic was permanently banned from The Laugh Factory.

Other attempts at forcing bow-tie fashions upon the animal world include former Warner Bros. mascot Michigan J. Frog and Puss, of Puss-in-Boots fame.