Why?:It's not okay to be gay

Good afternoon, dear children! Now, as you dear adorable gifts from the Angels may already know, a certain new breed of people, calling themselves the "gays" have been crawling out of the woodworks. Oh, how it saddens me to see these vile abominations actually getting respect and love for all the sinful heresy they commit! Alas we soldiers of God, who rightfully persecuted, abused and even outright murdered these Demonic Apparitions are being silenced, being driven into oblivion by those filthy secular liberals who are out to destroy everything we conservative Christians have fought so hard to achieve! Let me explain to you why gay people shall soon destroy the world our loving God created for us, unless we stop them in their tracks!

Just look at the way gay people walk! It's like they're women in a man's body. They wear PINK shirts, actually have a fashion sense, and speak in that....girly accent! UGH!

God had assigned men and women clear roles in life. While the man was meant to be the warrior and breadwinner of the human race, the woman was destined to be stuck at home, nursing her wailing children! The man had the right to slap around his wife and exploit her whichever way he wanted, while the woman was obliged to just shut up and enjoy the process of her buttocks being pummeled to pulp! Like a real, good girl would bow to her Dadd- oh, sorry children. Where were we? Oh yes, about the advent of gay people! 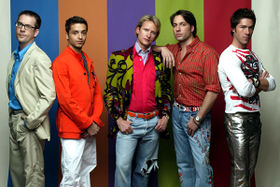 Just look at those vile heretics! How DARE they show-off their fancy clothes!

With the rise of these Satanic fiends, the masculinity of the Divinely Superior Sex is sure to be threatened! Okay, so the society has lost its way a bit. Women are getting jobs, we actually gave them the right to vote--as if we ever wanted to waste our time actually earning our own livelihood and deciding who runs the country--and what used to be a perfectly normal display of manly authority and love is now termed as rape. But don't you see, children? Gay people will further tarnish the already compromised roles God had assigned for men and women! For the first time, men will go to tea parties and GOSSIP ABOUT STUFF! Can you girls imagine a guy actually sharing your tastes in fashion design? Actually giving you knitting tips! And not even wanting to marry you! My children, I have already explained to you how the hold of God on His subjects has been weakened ever since those filthy liberals took over the reigns of society, but this terrifying rise of emasculated sissies is the equivalent of the Apocalypse! Therefore, we must do everything in our power to wipe out all gay men from the face of the Earth!

Now, children, do you know what that forbidden game was? You know, the one which Father Winkler taught to some of you girls over there? Where he showed you his wee-wee and...you get the drill, we don't need to go over that again. Well, that was just for educational purposes, and you must never, ever do that with any other guy. Because, as that brilliant encyclopedia already explained to you, that game is for grown-ups, and it's played only when a grown up guy and a grown up girl wanna become mommy and daddy. However, two grown-up guys can never become daddy and daddy like that, hence they should never be allowed to play that game!

However, those filthy liberals keep insisting that this is a question of human rights. That a man actually has the right to stick his wee-wee into another man's poo-poo! Because that's EXACTLY what gay people do! What a disgusting game it is! Wouldn't it be more fun if the men would pay more attention to actually playing the game with girls! Because that way, they both could have lots and lots of fun and even get a baby in the process! Because like I said, the forbidden game should ONLY be played if a GUY AND GIRL are playing it TO HAVE A BABY. As long as that much is clear, however, they could play the game anyway they wanted to. Probably even throw in a leather corset and a whip for good measure...mmm...now that would be-oh, sorry, were you saying something, little girl?

Oh, you have a question!

Wait, what do you mean Father Winkler did the exact same thing to your poo-pooh? Oh yeah, I remember now! Well, little one, you know you're not old enough to be a mommy, don't you? So he was actually doing you a favor, by showing you first hand what disgusting things those vile gays do with each other! We've even recorded the game so you can see for yourself! Now, you don't want to be around such icky men, do you little one? Well, neither do I! And it's about time we stood up and exercised our God-given right to mercilessly persecute these kinds of people!

"But Mrs. Winkler," you ask, "What about girls who like girls?"

Gay women? Well, they're just a myth! Any woman who claims to be a lesbian is just a feminist who couldn't find herself a real man! Beware the vibrators, children: any woman in possession of one is in desperate need of a man; but once she finds one, she will do everything in her power to destroy him. These freaks are highly unpredictable and very dangerous! Whatever you do, Do not have sex with them! If you do, you will regret it forever... So guys, search your girlfriends' houses post-haste! If you find one of those horrible devices, then leave her immediately before you catch the gay disease! You heard me correctly, children.

How else would you explain so many people "coming out" all at once? In the old days, whenever a man was caught sleeping with another man, they were tried by the Church and burnt at the stake! And such incidents were always few and far between. But with the rise of those damned secular liberals, the entire fabric of our society has gone into disarray! First, those bastards told us homosexuals could be cured, then they said homosexuality wasn't even a disease! To add insult to injury, they decided to cook up some "scientific evidence" to support their heretic lies! My children, I have already told you how almost every scientific discovery is actually a liberal conspiracy to wipe out the teachings of God, but this is simply crossing the line! The truly factual encyclopedia has already taught you how homosexuality and murder go hand in hand! Now just imagine a world where not only were murderers allowed to roam free, but could actually infect you with their murderous instincts! Because that's what our world will become if we do not seek and destroy all the gays first!

So you see, my children? You must go up in arms against these gay people, who are slowly but surely destroying the fabric of the world! The world our dear and great God created with so much love and affection! Save it from the gays and their vile liberal cahoots, and don't you dare listen to anybody who calls you a homophobe or bigot because one day, we good, clean, pure straight people will rejoice in Heaven with the Lord, while those filthy gays will burn in hell for daring to play the forbidden game with the wrong kind of people! And the liberals will burn as well, for DARING to support them in any way!