UnNews:John Kerry comes out as a horse 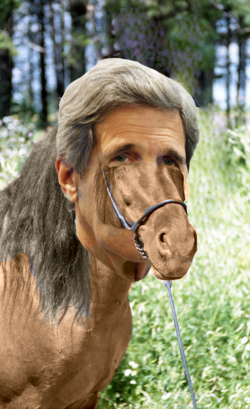 WASHINGTON -- Special Presidential Envoy for Climate John Kerry announced Wednesday that he now identifies as a horse. There had been rumors of his equestrian nature going back to his 2004 presidential campaign. Rumors and crackpot conspiracy theories also suggested he was Frankenstein's Monster, Herman Munster or Lurch.

"Today I'd like to announce that, yes, I am indeed a horse," Kerry, who has also been a senator and Secretary of State, said in his press release. "I have been transitioning since October."

Kerry is 95 percent complete with his transition into a horse.

"I have exhibited equestrian characteristics and had equestrian tendencies all my life," he added. "A lot of that has to do with at least one relative of mine, Ed Kerry, having been a full-fledged horse."

Kerry noted that some of these tendencies included neighing, galloping and "the one time I bucked Vladimir Putin in the balls."

The Envoy said he plans to honor the horse community by learning how to speak Neigh. He will also continue to speak English. "Being bilingual can really come in handy."

He says he will "gradually" phase out meat products until he can live entirely on a hay-based diet. He will continue to do things and live a life characteristic of humans while also exploring equestrian life.

"I've been visiting my friend Wilbur's farm. He makes an honest living and lets me gallop around on the grass."

Kerry says everyone has been accepting and encouraging of this new change, but given how new it is, there have been a few slip ups and misunderstandings.

"President Biden calls me Alf," Kerry says. "But he's getting used to it. He's very happy for me."

When asked about whether the former Senator would ever consider a de-transition, Kerry replied, "Nay."