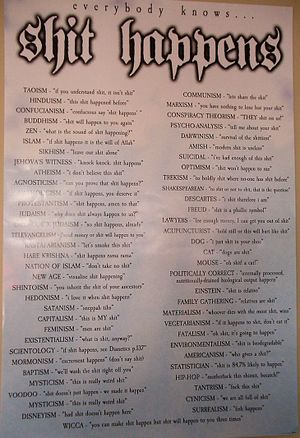 The first page in the famous 1969 book, "The Happenings of Shit", by That Guy.

Shit happens, we all know this to be true. Shit has always happened and will always continue to happen as long as humanity continues to eat things that can be turned into shit. Should shit cease to happen then the universe will undergo a period of mass constipation followed by the final period of verbal diarrhea and scientists have proved using complex mathematical theroms that this would not be good.

The Happenings of Shit, a book by That Guy was released in 1969 as a tome that was to register every known event that shit had happened ever by anyone ever. This book was a major success and as such has caused the death of many philosophers due to the extreme irony of a book detailing so much shit having been so successful and shit free. 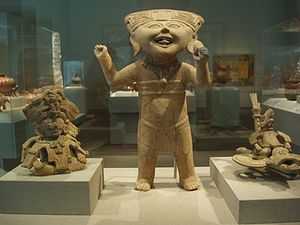 In the past everybody was happy and shit had not yet happened.

In recorded ancient history there have been little or no evidence found that supports shit happening. As can be seen from this picture. People were free to live a shitless life, and have shitless sex to produce shitless children who were all free of shit and shitty happenings. Things were just shit-less. Many shitless farms were built to grow shit free crops and raise shitfree livestock and everything was free of shit.

This was the way life was for much of human history with little or no shit to be found anywhere except for the Catholic Church. and life was good. However with technological advancement comes many new ideas and ways of thinking . This is especially easy to see with the development of computers as it has created many new groups of people, namely noobs,geeks, losers, you etc..

The same effects were seen when the development of "ideas" happened in the Early 16th century. With these ideas came thoughts of things that did not yet exist but that could exist... one of these things was shit.

This was the beginning of shit happening in society on a mass scale. With the idea that shit could happen anywhere, anytime out in the public things could only get worse. With the amount of shit happening on the rise people were beginning to overload with shit. Cities like London became covered in shit, there was shit on the streets, shit on the houses, shit in beds and in many other interesting places.

The situation became desperate as all of this shit happening created many diseases such as Cholera or East End Syndrome the latter of which is still a massive issue for modern medicine.

For a while nobody could understand why these diseases were arising, they had not made the connection between shit happening and bad stuff. The French suffered worst from the addition of shit into the world as most of their community is based around things that cause shit to happen, such as their language and art or their racial trait of extreme arrogance.

So shit continued to happen on larger and larger scales until one day while Joseph Bazalgette was huffing kittens [1] when suddenly he had a brainwave. What if the shit could be moved from where it happened to other places!

People laughed at his ideas and the scientific community at the time dismissed his theories of transporting shit as hogwash saying that "shit just happened" and told him to stop huffing orange kittens.

However he pressed on with his ideas and after 7 years of testing his "Secret Environmental Water-aided Excrement Remover" or SEWER plans were completed.

He presented his experimental data that showed using large volumes of water shit could indeed be moved from where it happened to new places, these findings shocked the scientific community and Bazalgette was immediately given a government grant to build his Sewers in London to remove the shit.

With these new sewers the capital was now able to relocate shit as it happened to the sea where it eventually washed up on the shores of France far from anyone who gave a shit.

In modern times shit still happens and in 1999 the London sewers were tested to their limits when a new show Big Brother was aired. For almost the whole summer of that year constant shit happened in the big brother house and as it was broadcast to many tv sets this amplified the outflow of shit.

As luck would have it the sewers were able to cope, but with new and ever more shit versions of reality shows based on big brothers shitty example being produced every year it is only a matter of time before we overload ourselves with shit once more.

In the early 1900's science was in full swing with many scientists practicing science round the clock to increase our scientific knowledge of science. These scientists, having never been much good in English at school, decided that it was best to try and explain things with numbers instead of words. This fad of explaining everything with numbers lead to the development of so called 1337 5p34k as well as many large and complicated proofs that used many numbers to prove that things existed.

One scientist called Stine-ein, while studying the work of Hume, realized that his own work on his relativity of theories was strikingly similar to what would be needed to once and for all prove that shit happens. A feat that had been hampered due to the fact that using words to describe shit simply did not do it enough justice for a proper theory of shit happening to be created.

Below is a simple version of the well known proof that shit happens:

It is well known that shit has the highest chance of happening when you're impossibly high, so the left side of the equation begins with an impossible number 'i' multiplied by the Hexponential function

. This is then integrated over time since we are wanting to find out how shit happening deviates with time.

The right side of the equation is the rate of change of 13.37 with respect to the sacred word n(i) (so as to balance out the universe).

Take the derivitive over to the LHS as an integral:

And so solving for one integral gives:

(Where T is Time)

, and hence shit, is a constant so long as n is constant for each i. (i in this case standing for individual)

Thus since n is constant as long as each individual is alive (n = 1) then for all individuals over all time periods we can say:

A Glitch in the Theory[edit]

This profound discovery was unchallenged until in 1911 when a French mathematician and theoretical physicist, Henri Poincaré ,was looking over Stine-ein's calculations. He found that much of the math involved in his calculations was in fact wrong!

He presented his case that these equations were wrong to the high court of physics and mathematics [3] who, having believed something to be true for more than 4.7 seconds, were subsequently peeved with the idea that it was wrong.

Poincaré was believed to have said:

But since he was French nobody really payed any attention to his whining... although Alexander Graham Bell reportedly inquired when his drink was going to be arriving and then proceeded to moan about the "supposed greatness" of French waiters.

Undeterred by the strange ramblings of Alexander and the general hatred of the French, Poincaré pressed on and continued working to fix much of the incorrect maths laid down by Stine-ein. He returned to France later that month to study specimens of shit close up and was intrigued by a particular sewer outlet.

He watched the outlet and realized that the larger collections of shit were behaving differently from the smaller lumps. [4] This gave Poincaré an idea, What if a shit was cut in half... and then cut in half again, and so on in this fashion until the shit could no longer be cut in half. The Greeks had pondered such an idea in the past but they were far too busy wearing togas and building ruins for others to admire to get anywhere with it.

Poincaré called this process "Paris Hilton". After the capital city of France and the French word Hilt meaning to "To continually split or open one's self". He postulated that the final outcome of such a procedure would be a "Kim Jong", or "Tiny shit" roughly translated into English.

Ways to tell if Shit is Happening[edit]

The international convention to tell if shit is happening has been laid out in "The Happenings of Shit". Section 15, paragraph 4, sentence 8, word 7: "of".

Which roughly translates to this common 3 step formula:

If at any point you smell something foul then shit has happened in your vicinity. At this point it is advisable to either leave the area or put on new clothes.

Shit can happen without warning and unlike the common myth "shit never happens twice" it does... It REALLY does. Sometimes shit can happen multiple times in one location such as the American Presidential Elections between 2001 to 2009.

Ways to stop Shit from Happening[edit]

Some serious shit just happened to this guy.

Shit has a nasty habit of happening when you least expect it or when you are doing something important. So key aspects in keeping shit from happening are to not do anything important and to always be ready for shit.

A key factor in stopping shit from happening is not to take Laxatives. These magical pills were first found in Ireland where they were used for speeding up the removal of alcohol from the body when throwing it up out the mouth simply wasn't fast enough to keep up with the intake of alcohol.

Should you find yourself in a situation where shit is about to happen then you have 3 different choices of which to take:

This is the easiest but most pointless of the 3 approaches... basically you let the shit happen. It's best to have a change of clothes and a large volume of water on hand for this approach.

Benefits of this approach include:

Did you know...
that this method of stopping shit happening is employed by over 82% of politicians?

This method is commonly employed by noobs or pussies, however it does allow for ease of use and is quite easy to master. You must first allow the shit to happen BUT at the moment of shit happening you must employ the use of the Secret handshake with a random onlooker. This directs the shit to happen to them and not to you. [7] 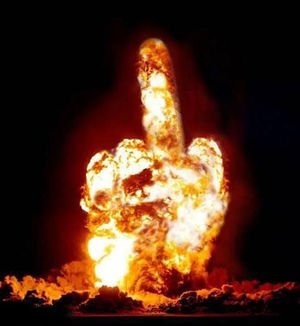 A picture of somebody being a smartass and they asplode

This method employs the use of your Fairy Godperson or other similar mythical wish granter. [8]

At the moment shit begins to happen you must wiggle your nose and grab your genitals while singing "God save the Queen" backwards at the top of your voice. This will summon the Fairy Godperson who will grant you one single wish. You can then use that wish to stop shit from happening and save the day! Go you! [9]

With the last approach it is often advised to gauge how much shit will happen as it can only be used once and sometimes it is better to just let shit happen then to employ method 3 to stop it.