From Uncyclopedia, the content-free encyclopedia
(Redirected from Bowser Jr.)
Jump to navigation Jump to search 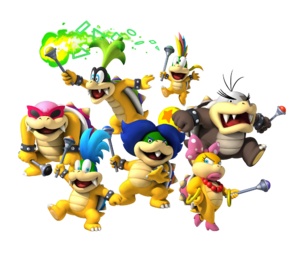 The Koopalings about to attempt to destroy Pearl Harbor.

For those without comedic tastes, the so-called experts at Wikipedia have an article about Koopalings.

The Koopalings are the love children of Bowser and Peach, born during Bowser's many, many, many kidnappings of her royal highness. Due to Bowser raping the princess so many times, there are seven of them in total.

They frequently invade Mushroom Kingdom territory for their father, due to the fact Bowser is too lazy to get off his throne, leave his castle located in the dark depths of a boiling volcano in Dark Land, and actually do so himself for a change, often simply trying to kidnap the princess instead.

Unfortunately for them, Bowser Jr is his favorite child, so they are widely considered all around the Mushroom Kingdom to be unloved and neglected. Because of this, they are frequently each odds against at each other at which one of them gets to kill Mario, Luigi, Toad, Mama Luigi, Dr. Rabbit, Kenny McCormick, King Harkinian, Weegee, Gay Luigi, Wario, Waluigi, and Donkey Kong in order to make their father proud of them.

The Koopalings when they're not getting a makeover. 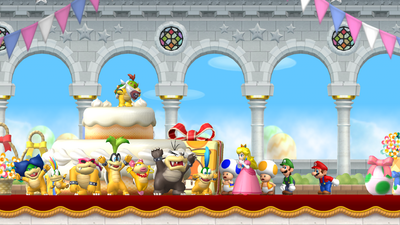 The cake was a lie.

Along with Bowser Jr, they once hid themselves inside a birthday cake and ruined Princess Peach's birthday party, kidnapping her in the process. Of course, Mario and Luigi (along with two random Toads) ultimately rescued her.

They once took over six of Bowser's seven Koopa hotels (Iggy did not get one because he had been bad). Mario and Luigi naturally invaded and kicked them out of them.

They once actually succeeded in kidnapping Mario (Morton and Lemmy did not get to participate because they had been stupid) and tortured him for days before he was finally rescued by Luigi.

They once turned a bunch of random kings nobody cared about in random animals, forcing Mario to try to change them back.

They once helped Bowser kidnap Peach and took over several lands. Since Larry was lazy, he stayed close to his father the entire time. Eventually, Mario killed every last one of them, but of course they came back to life.

They once assisted Bowser (who had been possessed by a girl) in destroying Mario and Luigi from within his own castle. All of them ended up getting pwned in rapid succession.