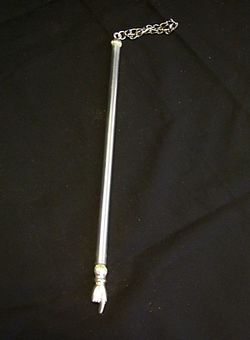 The Great Yad, this one being for official duties where depth and precision are most needed, every day variations tend to be shorter and wider. 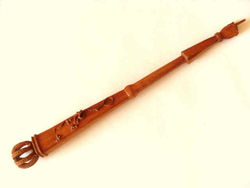 A wooden alternative for poorer Jews is offered by Synagogues. It is thought that Jesus Christ had his first sexual experience with an antique style Yad such as this.

For the uncouth among us who choose lies, the self-proclaimed experts at Wikipedia have an article about Yad.

Yad (Hebrew: יד‎), is a Jewish sex symbol and tool for reading Hebrew, specifically an awkward version of the Old testament called the Torah. Its etymology originates from "hand"; however it translates more closely as "hand job." Due to the difficult nature of Hebrew only being understood by dyslexic savants and Mossad agents, it became necessary for a device such as this to be invented, which makes the Torah easier to read for "normal" Jewish people. [1]

The Yad is also used in Martial arts and Jewish relationships, where it functions as a sex toy and a symbol of domestic entitlement. The male of the Jewish household can often be seen using his Yad to point out to his wife where she stands, or what she should do. This also goes to the children however UNESCO and Oxfam have protested its use along with circumcision in Israel and other Jewish communities worldwide.

Purpose in the Jewish faith[edit]

Obviously Hebrew is a problematic language, with segregation amongst sexes and faux piety amongst followers making it difficult for Jews to express themselves, particularly in a religious setting. Often a Rabbi may espy a young Jewish Girl in the procession, in order to attract her attention he will be found using his Yad to point her out so that they may engage in courtship. Hasidic Jews also use the Yad as a sign of sexual arousal, as otherwise their large beards/hats could possibly confuse women as to their intentions.

During the Bar Mitzvah, one of the oldest ceremonies in the Jewish canon, a Jewish boy is proclaimed a man. He is then allowed to choose which of his Jewish relatives he would like to engage with. In this instance, the Yad is used by the young man to point out his chosen female of the Synagogue procession. Often, ankle-showing and cash bidding are used to fix the ceremonies of wealthier families.

The Yad is also used socially to construct the Jewish nation. The Yad, with its pointing finger of 'Yid pride', points out the goals of the Jews during parliamentary discussions - which usually consist of "how to sort out the 'Palestine issue' and "international Zionist control." The Yad is also sent as a present from Jewish leaders to foreign leaders, given as a token of esteem which further reinforces the Yad's symbolic message of Israel's influence on international politics. [2]

The Yad is useful for reading the Torah whilst the physical act of love is taking place, often in the "doggy position". This has provided many Jewish religious leaders with the chance to encourage Jews to celebrate their faith during sex. A common method is to have the Torah placed on the Jewess' back; thus the Torah can be read more easily with the Yad as the reader's place is not lost whilst the "action" it taking place.

Many Rabbis have petitioned fellow believers to participate in this practice so as to express their faith, not only in pious union with God at the Synagogue, but also in the union of sexuality - preferably with a member of the opposite sex, of course. It is also reported that the Yad is an expedient device for stimulating the Gräfenberg spot in females, as well as the prostate in males. The Yad's accuracy and religious backing have earned it a positive reputation in all aspects and quarters of the Jewish sex industry.

The Yad has frequently been used in the various traditions of Martial arts alongside several techniques native to China. To this day, sources are somewhat vague as to how the Yad got there, but the Jews made it there well before 300 BC - they promptly left when the Chinese proved themselves lousy at banking and tolerating "scrounging behaviour", for which the Jews had long been accepted in Europe.

The tradition of using the Yad as a weapon has continued today with poorly organised community efforts attempting to preach the art of Yad fighting. This is particularly prominent in the rougher end of town, where vulnerable children are encouraged to "take care of themselves" - a similar story goes for overweight adults attending classes, often complaining of abuse at work or in the home. Whatever crushed demographic, the art of Yad fighting remains a popular pastime.

A few examples of the Yad types. From the top: the Poor Kitten, the Aberdeen Shunter, the Rhineland Corkscrew, the El Dorado Twister, and lastly the Regal Sampler.

Well known films often feature the Yad, as well as prominent advertisements and subcultures. This trend reached fever pitch in 2004, when photos surfaced of Matt Damon training with a Yad for "superior acting", followed by reports of Hollywood studs like Tim Robbins and John Travolta also engaging in Yad training - indeed, both of them boasted publically at having "taken the Yad up" many times. This is seen by Noam Chomsky as a definitive symbol of Jewish control across the globe. It is likely that throughout the next century Yads will become so integral that everyone will have to own one for the essential purposes of scratching, masturbating and degrading women.

Many have taken up the Yad for many reasons, even outside of the Jewish community and large Corporations have endorsed their use, and are developing their own brands. David Beckham, for instance, is reportedly going to be part of the "Oy Vey, Oh My" Yad marketing campaign by Nike. Others including Ivana Trump have also confessed an interest in Yads: "My husband’s impotence bothers me no longer", she asserted, after publically purchasing her first Yad at La Senza. [3]