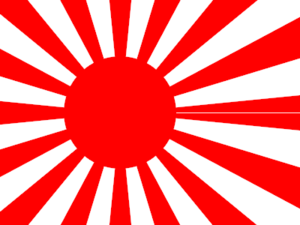 Back in time of middle Showa year there was war that should have end all war. That was the war of the all-mighty and most tentacled Emperor-sama (BANZAI!) for the greatness expand of Japanese Empire! You white barbarian refer to as Pacific War, but we of powerful imperiarist Dai Nippon Teikoku refer to as Greater East Asian Prosperity Justice Fight! 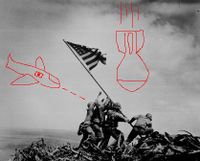 Ohh, yes. Those was days.

In name of Great Emperor we answer the call to make Japanese Supuremacy known to world, with the urtimate dream of make united one world under Rising Sun! BANZAI! Naturarry this begin with one united Asia under its rightful inheritols! Of course any interference to realize of the Japanese Dream receive the swift retribution! And so many blave soldier fight on rand and sea, sending rain of kamikaze prane into poorly crafted American aircraft carrier, sharp bayonet into wonton berry of Chinese army man, and so many sturdy Japanese penis go into nubile Chinese girl! Many Japanese man die too, but all go to highest rank in heaven and get harem size of emperor for all eternity!

Ahh, it was good… 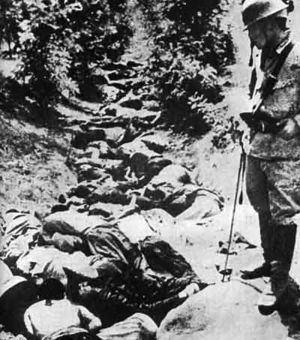 So many chink, so rittle time...

“I praise Army for cutting down rike weed large number of enemy... Huff... huff... Somebody hand me tissue.”

The fight start nobly with justice for most inferior of the Asian race, the dirty rodent eaters of China! We, the brirriant Japanese mastered all aspects Western technology and military while they sit jacking off for many year! Now the Japanese penis had grown too strong and we say we give those weakling commies the dicksmack! I can just see their surprise face (with much more sranty eye than Japanese -- scientific proved!) when we charge nobly through their pathetic force! We fight brave in battlefield and village and conquer all for Emperor! BANZAI!! Running has no hope! Any chink wench over 12 can get the noble experience of pathetic rife! If lucky they get divine white Japanese sperm injection, or if ugly just in the face! Only this purify their inferior raciar quarity! BUKKAKE BANZAI!

The Rape of Nanking

...This typical Chinese. But still good in a pinch!

With many Japanese man of sturdy penis fighting blavely out in world, now many woman of other country are bring together and blessed with chance to feel surging Japanese Spirit… In their stinky cooter! We gather them and give them the perfect rife! They only need receive preasure from sturdy Japanese penis every day! So easy... and preasure! Korean, Chinese, Filipina; even some Dutch for a little spice! Yes… I rike spice. I always say, if you can't have home cooking, you go ethnic! I can always go for some kimchee (invented by Japanese, interantional agreed!) or flied noodle (again invented by Japanese) once in while, yes.

This only side note, but now some comfolt woman start to complain! They say we did wrong thing! No, no, no... They not say that when Japanese penis give them crimax rike husband never give! Some woman never appreciate...

And then… Pearl Harbor!

He thinking "We get pwned".

Oh, I rove this part!

December 7, 1941 – A day that live in infamy in history of American getting PWNED!! Carrying divine spirit of Emperor-sama in heart, wave after wave of Zero Fighter make the super destruction on pitiful U.S. base and not even Ben Affleck can stop! Maybe if you have heijoshin like proud Japanese warrior you can be ready for attack, but no! You have hand up ass, and so you get bomb! Wah hah ha ha!

...Ohh, I get too excited so I stop this now for shiko shiko break.

The Japanese Army were involved in lots of good community aid projects in places like Thailand, Malaya and the Philippines. Communities along the River Kwai in Thailand still thank the Japanese Army for their benevolence and kindness in helping to build bridges.... HEY! Where does that wire go?

On 19 February 1942, Japanese warprane first bomb Darwin Australia, but fail to hit either of their targets Hugh Jackman or Nicole Kidman. They try many time, but eventually gave up. This prove to be why Horriwood suck so much in modern time.

HA-HA!!! We bomb you futile American with our Initial-D Corporation® Tofu bombers! Tofu, its VEGETARIAN! With no meat, you will have 20% fewer protein and our plan will SUCCEED!!!

Yes, we know how it end. We get drop frash-boom atom bomb from sky because American too aflaid to come down and fight rike men! We could do same thing if we want to but that is below Samurai Code! The Imperial Spirit is never die! One day we shall rise again, reclaim our western territory and conquer China forever!