UnNews:The Tooth Fairy Comes out of the Closet 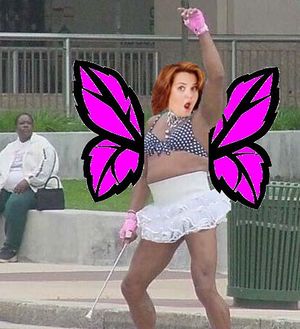 Officially out of the closet

An uproar shot thought the Catholic community yesterday when the Tooth Fairy officially came out of the closet. In a recent press conference, Mrs. T. Fairy announced “I have been holding back for far too long, and feel it is time to let the truth come out. I am a lesbian.”

Rumors of Mrs. Fairy’s homosexuality have been floating around Wikipedia since Christmas, ever since she was seen leaving Mrs. Clause’s house at 4:32 in the morning. Mrs. Clause insists this has nothing to do with Mr. Clause’s drunkenness, and that she would never “Try to do anything to something that small” and further insists that “All I did was sit on the poor lady”

The Easter Bunny has come out as a strong supporter of the Tooth Fairy, claiming “I don’t care if she is lesbian or straight, she is still very friendly, and bakes some goddamn good cookies."

When asked about her plans for the future, Mrs. Fairy was not very specific. “Oh, I will still make all my rounds, giving kids money in exchange for their teeth, but I do feel awfully tempted lately to press my legs against a girl whenever I pass by one…”

Local Catholic communities have been quick to turn against the Tooth Fairy. Father Smith has stated, "To think that we once trusted this women with the teeth of our children, only to have her turn against us and society to participate in the sin of homosexuality! This is a disgrace!"