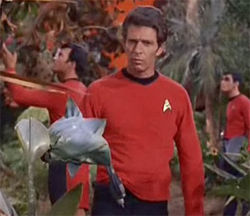 Ensign Burt "Red" Cameron, center, about to prove that curiosity does indeed kill the cat.

"Ever since I was little I've wanted to be a space-tronaut; yearned to go to unexplored worlds and get killed by their flora. Or fauna. Or weather. Or an amorphous, malevolent fog. I'm not picky. The adventure and the premature end to that adventure are the important things. Especially the end. Even after I left the Space Cadets I never gave up hope that one day I would have the opportunity to go out where no man has gone before and have a plant of some sort blow pollen in my face, allowing me just enough time to let out a single short scream before slumping to the ground, dead."

Mr. Cameron achieved the rank of Junior Space Cadet in the Space Cadet Corps before being discharged at the age of thirteen for what his Commandant, Vice Admiral Owen Braxton, noted on Burt's permanent record as "...excessive zeal in the pursuit of an early demise.". UnNews was unable to contact the Vice Admiral for an interview, as an alien of unknown origin appeared during Burt's court-martial and erased the long-serving officer from history. While Burt miraculously emerged unscathed from the incident, he doesn't remember his former Commandant at all, as he never existed. UnNews staff also fail to remember the non-existent Vice Admiral, leading them to scratch their collective heads at the previous portion of this particular paragraph. Further, in their estimation, this quandry will only be solved in a later episode which references this one, perhaps assisted by the deus ex machina of time travel or the cheap titilation of a green-skinned girl in a shiny bikini.

Commodore Greskin, for one, is glad to be rid of him.

"He was a danger to himself and those around him." admits his Academy roommate, Chester "Icks" Ixsl-glybix. "He spent nearly a third of his time in sickbay, recuperating from one close call or another, and for the other two thirds the people around him were dropping like flies. I mean, I was his eighth roommate! I was so scared of him that I pretty much cut most of the fourth year at the Academy just to avoid being in the same room with him. Sure, I have to repeat a year, but at least I'm still alive. And I thought my homeworld of Cheron was dangerous, what with the war between the guys that look like humans with black greasepaint on the right side of their body and white on the left side and the guys who are the same but vice versa, and all."

Commodore Dale Greskin, head of Starfleet Academy, shudders when he remembers the carnage that inevitably followed in Cameron's wake. "He was always getting into trouble. Whether it was fights with Klingons, transporter malfunctions, getting caught in alien force fields, or poking unidentified space fungi, he was always 'this close' to getting himself killed." the Commodore stated, holding up one hand with the index finger 3,000 microns away from the thumb. 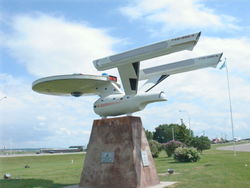 The Enterprise, lifting a spacesteroid in the 2288 Space-X Games.

"The other students called him 'Redshirt'. I just called him 'an administrative nightmare'. In the four years that he spent here I had to send over twenty letters of condolence to parents whose kids had come to unfortunate ends because they had the misfortune to be his classmates. We would have just kicked him out but, frankly, our staff was too scared to be in the same room with him, even for a minute, for the interviews necessary to get rid of him. Mostly we just let the computer teach him."

Ensign Cameron has been posted to the NCC-1701. The Enterprise, a Constitution-class starship and Starfleet's state-of-the-art, is expected to provide plenty of adventure for the Ensign while on its five year mission to explore the deepest regions of space.

"Awesome!" Ensign Cameron excitedly exclaimed upon being told of his first posting. "I hope we go to a cowboy world...and a gangster world...and one that looks just like Southern California...and one where people feed big plates of fruit into a giant polystyrene volcano shaped like a dragon's head. That'll be so cool!"

This article features first-hand journalism by an UnNews correspondent.
Retrieved from "http://en.uncyclopedia.co/w/index.php?title=UnNews:Starfleet_Academy_graduate_looking_forward_to_tour_of_duty&oldid=5865243"
Categories: