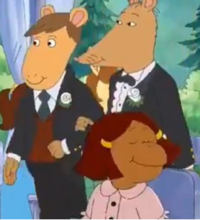 Mr ratburn is gay. he is the worst arthur character ever EVER he suxs. He just married a guy!!!! they asoomed he was marying this hagy naging bich but insteed he was going to mary another man. i don't even know who this character is because i didnt read some gay book. i dot like him and niobody does because he is gay and stupid and ugly and retarted and skinee. i wish he will gats firedfrom his job, ritten of the ahow and goes to the moon or a gay retared place. he is GAY GAY GAY GAY!!!!! HE IS THE WORST FICSHUNEL CARROTER EVER. HE IS SO BAD. I HOPE HE GET SOME SICK.

This article was made possible by:

The Corporation for Public Broadcasting

And by contributions from viewers like you. Thank you.