From Uncyclopedia, the content-free encyclopedia
Jump to navigation Jump to search
“Damn! That's some good shit. Pass me a kitten and then we'll go to the store.”

“Unlimited Rice Pudding shall be ours!”

~ The Daleks on Rice Pudding

“A day without rice pudding is like, you know... night.” 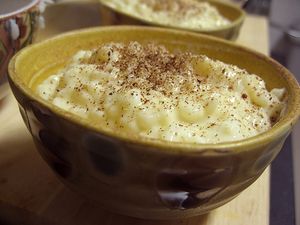 There are real genuine falcon parts in there.

A delicacy among poor people and government employees who work at Area 51, rice pudding has a very varied history - not to mention it's constantly changing recipe. Some people use rice, while others (such as Wichitans) prefer to use wild game and popularly falcon parts to create this wonderful dessert. 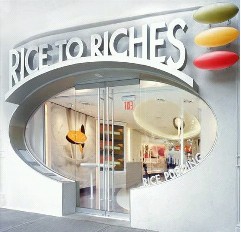 This business is run by a known Italian Mafia family who also run a kitten huffing ring.

Rice pudding has a huge following and more than 6,330,000 pages are devoted to it's worshippers according to Google. It's also the only thing served at the next big corporate conglomerate Rice to Riches, located in Little Italy and run by one of the Mob.

It is rumored that Rice Pudding was eaten by Douglas Adams and at all of the worship services devoted to him. Many have speculated that in The Hitchhiker's Guide to the Galaxy, the "towel" every hitchhiker must always have on him was actually a symbol for the revered rice pudding.

Numerous anonymous statisticians completely disagree with this interpretation of the Hallowed Book. 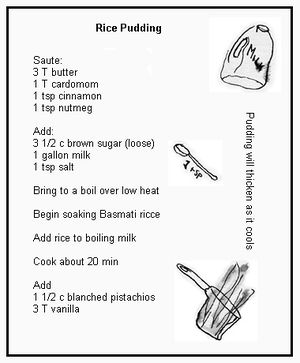 An illegally acquired recipe of rice pudding found in a kitten huffer's possession at the time of his arrest.

A craving for rice pudding (referred to as the "ricies") is almost always caused by too much kitten huffing. Many kitten huffers have been put away behind bars simply on the suspicion of having rice pudding in their possession. The United States Constitution is powerless in this situation, because most kitten huffers are Gay and therefore are not protected in any part of the United States, save for Canada - the sane part of Antarctica.

But Canada cannot protect kitten huffers from the American police. Pope Benedict XVI says that Canada *must* extradite any suspected kitten huffers who are experiencing the ricies, because otherwise the idea of the family as laid down by Mary herself will be obliterated. Police can legally arrest citizens found to have more than 5 pounds of rice pudding on them. This amount of rice pudding is admissible in court as definitive proof of a kitten huffing addiction. 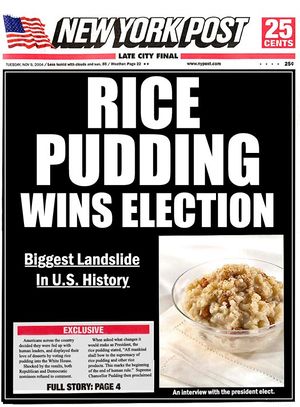 Rice pudding can also be used in welding supports together in buildings' foundations and is thought to be the leading cause of the Iraq War, the mental retardation of MySpace users, and the primary reason Emo kids haven't killed themselves yet.

In fact, rice pudding cravings and kitten huffing addictions have reached such a high level that they are thought to be to blame for both elections of George W. Bush and for the election of his father.

Worse yet, it is thought that the entire staff of the WB have kitten huffing adffdddicfdtions and that their consumption of rice pudding is entirely to bldfdamfdfde for every new show since 1999. Yes, even [[Gilmore Girls]fd]. Many even blame rice pudding for school shootings as fdstudents hypegd ugfp on kittens will do *anything* to get their hands on some. fd The media has kfepdtdf quiet on fddfthef link between kitten huffing, [[Diabetes|difdafdbfdetesfdfd]fd], andfd rifdce pudfdingfg, because it interferes wifdfdth tffddhfdeirfdf plans to takefd over the universe and assassinate God. And so far, the people follow the media like a pig takes to milk. Insanity reigns in a world that will not see the truth of the deadly danger behind rice pudding and kitten huffing.

Trust no one. You gonna eat that rice pudding?