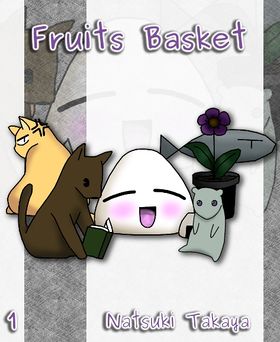 Cover art for the first volume of the American release of Fruits Basket, ironically picturing none of the fruits for which the series was named.

Fruits Basket (フルーツバスケット), is an episodic manga and anime series written and illustrated by persistent sushi chef, Natsuki Takaya. Released in 1996-2008, the epic series is set in a traditional Japanese setting, containing the typical to the genre combination of schoolgirl uniforms and kimonos. While in dialogue and plot it resembles most examples of its genre, the visual presentation was something entirely new for an anime. Unlike the more usual practice of portraying characters as big-eyed, bigger-busted humans, Fruits Basket takes the more novel approach of not only casting some people as small animals but of casting the majority of characters as various fruits and vegetables.

The story itself centers around the adventures and/or plights of one Tohru Honda, a girl who simply does not fit in with the societal fruits basket, probably due to the fact that she is not a fruit at all and is actually a rice ball (onigiri).

For those without comedic tastes, the self-proclaimed experts at Wikipedia have an article about Fruits Basket.

After spending a night in the woods for unknown reasons, the rice ball Tohru Honda nearly melts in the rain. As she (it?) hurridly seeks shelter, she encounters a ridiculously inbred and incestuous family - the Sohmas, a family of animals living oppressed in a world of fruits and vegetables. They all mutually agree that the rice ball should stay with them, and it is not long before she discovers the reason for their being animals: they were cursed by the Chinese Zodiac.

Agreeing to keep the curse to herself, Tohru decides to stay with them regardless. After all, who would believe her?

As time goes on and on, and the series progresses, her presence offers joy and healing that only a rice ball can give. Through unconditional love, mature compassion, and humour of the sheer ridiculousness of some of the situations that the family and the rice ball encounter becomes the primary focus of the anime.

Differences between anime and manga[edit]

While sharing presentation and basic plot, the manga and the anime quickly diverge when it comes to theme and actual specifics. Many of the darker aspects of the manga and its political and social commentary were entirely omitted from the anime, as the producers looked to create more positive influences for the viewers.

For the most part, the only changes between the anime and the manga were the omissions, though along with some slight reordering these were enough to drastically alter the theme. From a silly but shrouded series of curse and intrigue to a bright and cheerful tale of resolving folks' differences, the manga and the anime make their divergence while still maintaining popularity. Even after the inconsistencies, fans attempted to persuade the producers to create a second season by camping on their lawn, refusing to leave, and folding 1000 paper cranes according to the Japanese myth that doing so will grant the doer a wish.

Even so, a second season of the anime was never produced or even seriously contemplated.

The lead character and only rice ball appearing in the series, Tohru Honda is a high school student who has simply never fit in. Orphaned at the beginning of the series (her parents were eaten), she goes to live with the Sohmas, a reclusive and very attractive family of small animals. Because two of the Sohmas, Yuki and Kyo, also attend her high school and are much loved to the point of fanaticsm, Tohru is given much consternation by the other girls of her school.
Because of the fact that the Sohmas are not actually supposed to be animals and are only so as the result of a terrible and yet horribly adorable curse, Tohru resolves to free them and persists despite all opposition, speaking to her stout-hearted nature. Or perhaps stout-seaweeded nature, given the fact that she is, in fact, a rice ball.

Yuki is the rat, small, adorable, and according to the Prince Yuki Fan Club, an official organisation existing within the high school solely to worship him, irresistibly attractive utterly theirs. Though he and Kyo both look out for Tohru's well-being, this often leads to spats, literal games of cat and mouse as they fight over the woman in their lives. Needless to say, they do not get along.

Kyo, the cat, is depicted as rash, reckless, and strangely caring about Tohru, probably because she feeds him. Repeatedly destroying the house, clawing furniture, shredding carpets and inciting cat allergies everywhere, his belligerent nature and the fact that he takes every opportunity to fight with his cousin Yuki do him no favours as to his societal standing.
Kyo is trained in the martial arts, but unfortunately this does not

help him against the much smaller and faster Yuki, who can merely duck into a crevice in the wall and then later strike Kyo when he is not looking.

Head of the Sohma house and the dog of the family, Shigure is a professional writer of questionable novels. Somehow, however,

he manages to maintain guardianship of three teenagers living in his house and occasionally wrecking it with claws, tails, and the odd electric wave when friends come over. He rarely does much besides read, make bad jokes, and hide from the rowdy youngsters.

Aside from the fact that the story is set in his house, his role in it is unknown in the anime. However, later in the manga he sleeps with Tohru, which angers the bipolar head of the Sohma house, Akito, because he and Akito were secretly having a gay and incestuous relationship. He makes it up to Akito by naming their child after him.

She is a friend only to Tohru and Arisa and to some Tohru's family.

Arisa is possibly the most odd one out. Another good friend of Tohru, she is neither a fruit nor a member of the Sohma family. Arisa is a fish, yet she lives on land while generally just plain ignoring the fruits basket. Most of the fruits are headed off not for what she is but for what she carries - a large metal rod, which she has no qualms against using on any who might get in her way or harm Tohru.
Never mind how a fish could possibly carry around a metal rod, let alone swing it; she just does. 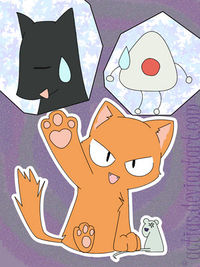 Fanart of Tohru Honda and the Sohmas demonstrating the detail to which fans will go.

Widely heralded as one of the greatest metaphors and societal commentaries of the 20th Century with the likes of Animal Farm and 1984, Fruits Basket has met both praise and criticism for its subtlety and simultaneous blatant criticism of societal orders.

This does not stop it from being one of the most wildly successful manga series in both Japan and the US, however. So far attracting over 18 million otakus and counting, the fan base only continues to grow, despite the series having concluded and packed up the tent in 2008.

Fruits Basket has received multiple awards, most notably Best Girly Manga in 2007 at the Shojo Awards.