From Uncyclopedia, the content-free encyclopedia
(Redirected from Anti-Semitic)
Jump to navigation Jump to search
Whoops! Maybe you were looking for Republican Party?

“The Holocaust museum is run by Jews!”

An antisemite (also spelled anti-semitie or anti-Semitie) is a spermicidal device, mostly although not exclusively used to keep freaks from breeding. It typically works by taking babies, bleeding them, and baking that blood into the Arab Eucharist. The dead babies then get together, write up a dumb manuscript on how to take over the world, and then go into the banks to lend people their money and pee. It is quite effective. 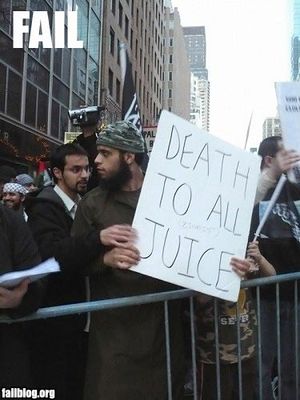 Anti-Semitism consists of two morphemes. The first, anti is derived from the Inca word Anti, denoting the neighbouring tribe today known as Campa. The Anti people, who gave their name to the Inca province of Antisuyu, were notorious for ferocity and cannibalism. Semitism is derived from the word semen, lifegiver in Aramaic, in turns derived from the name Sem, after the founding father of the many, many tribes of Israel. Sem is called the lifegiver because he had a lot of non-consented-sex which lead to the birth of babies. Thusly, anti-Semitism roughly translates into babykilling.

Trends in spermicidals change from time to time, and Anti-Semitism is no exception. Throughout history the baby-killing fashion has experienced its fair share of change.

Neanderthals and modern humans lived peacefully until 50,000 BCE, when the Jews were created by Satan. They quickly seized control of the Neanderthal media and banks and lured the Neanderthals into war with the humans for their selfish greedy interests. After the Twenty-Thousand Year War, the Neanderthals were wiped out, because their media was controlled by a cabal of Jews who stabbed them in the back. The Jewish president of NBC (the Neanderthal Broadcasting Corporation) was named Semite Judenhasser, and the brave people who fought him called themselves the Anti-Semites. However the Jews then went into hiding in the mountains of Khazaria for thousands of years until they decided en masse to make war against Egypt, the first White nation.

Anti-Semitism was first used in Ancient Egypt, most likely around 1600 BC, when an unknown, yet fair and just, Pharaoh demanded that all male Jew babies should be killed. This was justified, because the Jews were all in a secret plot to destroy the White Egyptian race by encouraging innocent White women to breed with Korean people from Zi-On (온의), also known as Zionists, and broadcasting pro-Zionist (Korean) propaganda. Pharoah almost succeeded, but missed one super-sneaky Jew-baby known as Moe. A few thousand years later a Jewish king named 'Herod-the-nice-man' would read about this incident while sitting on his throne(shitter) and realize that that Pharaoh was actually onto a good thing and instigate another male Jewish baby slaughtering, he dubbed it Operation Cull the Herd it is recorded in history as being a great unifying event throughout the Jewish world, for posterity purposes all male Jewish babies were circumcised before being killed and their foreskins were made into necklaces that became the height of fashion in the Jewish nation of Jewzakahstan. Herod would later become the first man to be cyrogenically frozen, he was later thawed out and changed his surname Hitler, though his Christian name (Jew's have those too) remains a mystery to this day.

For many years, anti-Semitism flourished in underground Europe and the Middle East, until Martin Luther canceled Christianity and made everything legal. Ever since, everyone has been having lots of anti-Semite abortions and sexin' it up wearing condoms, and that's totally okay now!

The eighteenth century saw the creation of the Elders of Zion, a council of world Jewry modeled after the Khazarian Senate. Each Jewish committee elected an Elder to sit on the Council, which met yearly to discuss how to consolidate control over the goyim. 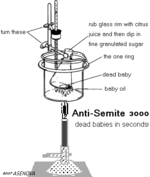 The single most successful case of anti-Semitism was the lottery-like abortion game invented by ever-visionary German Emperor Adolf Hitler during his rule. Through random selection, lucky citizens were selected for deportation and killed for the sake of everyone else's well-being. This method was later dubbed Holocaust (very late abortion in Greek) and is generally considered the peak of "anti-Semitism". By chance, this also rid Germany of many foreigners, putting a halt to multiculturalism.

Satanists also practice anti-Semitism: they ritually murder babies in day care cults, whereupon a Head Satanist, or Baphomet, will open up a day care center, take in babies, refer to one of them as "it" rather than "him" or "her", and then sacrifice it, saying "Abracadabra!". Then they spread chicken blood all over the floor and chant the "I Am Not a Sissy" prayer over and over again. After the fact, another Satanist takes the role of Shrink, in which one tells a kid (to whom nothing bad actually happened) to lie down on a couch and tell everyone that something bad happened to him or her, whereupon the Satanists all get arrested and go to jail. Nobody knows why the Satanists practice this bizarre (according to Jerry Springer) kind of anti-Semitism, but they do! (Falun Gong has imitated this practice, but they never became very good at it; when they try to do it, their traditional morality compels them to get married instead.)

The Learned Elders of Zion[edit]

The Council of the Learned Elders of Zion meets every year in a secret location, normally in Zionist-occupied Congo. Its current President is Jerry Seinfeld (since 1999). The 2008 delegation was as follows:

Apart from controlling the banks and the world media, its network of long-reaching agents (known as octopus arms in Jew code-speak) execute the following agendas created by the Council. (Year ratified in brackets)

The Learned Elders of Zion are also known worldwide for their best-selling cookbooks, most notably 666 Recipes using Christian Children (1066) and 666 Recipes with Palestinian Organs (1743).

As written down by Moses in the parshat (Torah portion) "Protocols of the Learned Elders of Zion", Jews are a race. Jews started this "there's no such thing as race" stuff during their oppression of the White Egyptian people, so nobody (esp. Christians, Germans and white folk) won't go after them and kill them as if they are "animal-like". This logic worked out well in America, where the usual minorities are black people and Hispanics, not Jews who live in poor urban ghettos or remained separate but "equal" races apart from the Nordic Aryan white people. To be logical, the majority of the world's Jews today are inter-married with the Khazars, an Asian race from Khazaria, Mongolia, where the Jews laid in wait after destroying Neanderthal civilization and stealing their land for Zionists (Koreans). 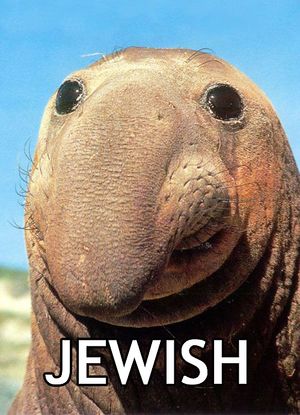 ...what?
Retrieved from "http://en.uncyclopedia.co/w/index.php?title=Antisemitism&oldid=5934029"
Categories: