ALIVE! Cafe's Head Chefs train for no fewer than 12 years at the world famous Soylent Green College. Only the choicest cuts of meat are used in the preparation of their dishes.

For those without comedic tastes, the self-proclaimed experts at Wikipedia have an article about ALIVE!.

ALIVE! is a popular themed fast food franchise with chains throughout Uruguay, Chile, Peru and Argentina. Based on the award winning film and TV series of the same name, it was founded in 1974 by Jeffrey Dahmer and Ed Gein (later of the Home Improvements Store - SKIN!), with their first ALIVE! Cafe opening in Montevideo, Uruguay, where they began to cover the walls with related ephemera. The franchise remains very popular particularly amongst Rugby players as an excellent source of nutrition and vitamins. 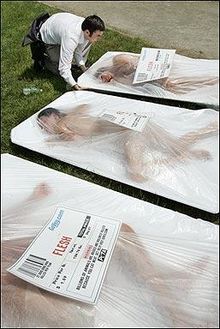 From the 1950s onwards the rise in popularity of fast food restaurants created a boom industry, with a number of brands featuring in the Index 100. During the early 1980s, in an effort to beat off stiff competition, the corporation chose to rename many standardised menu items to ALIVE! branded versions, many of which have since made their way into the public consciousness. These include the following:

It is believed that many of the ideas propagated by the ALIVE! Group were later stolen by other companies, including McDonald's. These include many of the meat processing techniques first developed by ALIVE! 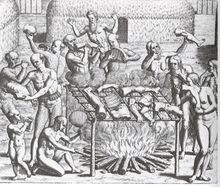 Customers are expected to eat their meals in an orderly and well mannered fashion, taking in the ambience and decor of an ALIVE! establishment

The Al Packer's cafe franchise was at one time the major market competitor for ALIVE!, but has since gone bankrupt, purchased by the Sara Lee Corporation on public auction, and converted to a health food chain in 1979. Since then, ALIVE! has enjoyed a virtual monopoly, with the exception of the Roadkill Cafe's occasional human-themed specials.

In June 2004, the ALIVE! Group announced the setting up of an worldwide exportation of their food products. To deal with the rise in demand it is expected that the entire population of Columbia will be placed into cold storage to provide fillings for the next five years.