From Uncyclopedia, the content-free encyclopedia
(Redirected from Ipod)
Jump to navigation Jump to search 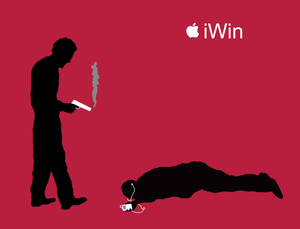 The popularity of the iPod led to some users becoming violent.

The iPod is a mystical white contraption and government mind control device, that endlessly screams in the foreign language known only to mole people as "Music." The most distinctive feature of the iPod the fact that it is internally programmed to kill babies.

The iPod was invented by a mischievous band of frisky kittens with the intent of destroying the human race, and leaving little presents on the carpet. It succeeded in this goal on March 10, 1975. All humans who appear to be living today are in fact weak robotic projections of their original versions before they were all destroyed by iPods.

Because iPods were developed by kittens and rushed to the market so quickly, the iPod is a poorly designed device.

Whenever the urge strikes the upper echelons of Apple Society, a new item is released in the iPod image.

Use a pirated software program called iKnowNothingAboutCopyrightedTunes to share files and music with foreign Web sites and transfer them to your iPod. If you have an iPod or some variation thereof, you can use it to:

View the little black book of Madam Heidi Fleiss to verify your husband's name does not appear.

Schedule times to meet with your crack dealer or your future mother-in-law, whichever is the least offensive. You can even schedule your upcoming nuptials well in advance, but don't bother. After a few months of having this device wired permanently to your cranium, it's unlikely anyone will want to marry you. Your verbal and social skills will be so badly damaged, the only option left for you will be to join a nunnery.

Your iPod can double as a digital voice recorder, if you have enough discretionary income to purchase all the additional overpriced accessories that are endlessly marketed to weak minded consumers. Use your iPod to record class notes so you can cheat on a history test, all the while claiming you're really listening to music.

Set your iPod to go off at inappropriate times, like 2:00 AM when your Dad is trying to get a decent night's sleep before his early morning work shift.

Hot wire the internal workings so the whole case shimmies to and fro while it's in your front jeans pocket. Also see iPod shuffle.

Hot wire the internal workings so you can save a bundle on your health insurance.

All of your contacts have a special "Judgement Day" feature on it, and can be used to eliminate all of your opposition via the iPod exploding into a million bits. The company claims they are not responsible for "butt homicide."

Here are a few neat ideas for getting the most out of your iPod.

Whenever you wear your iPod headset, leave one ear bud slightly askew so you can still hear your parents talking. This allows you to selectively ignore comments that don't interest you, while simultaneously enabling you to chime in whenever your attitude, taste in music or maturity are questioned.

iPods should never be mistaken for bologna, frankly because they are more likely to resemble moldy cheese. iPods make terrible milkshakes. Do not put your iPod in the blender with ice cream. However, it's perfectly okay to substitute iPod shuffles for pineapple chunks in lime Jello.

Never spread glue on an iPod. It makes it harder to remove it from your pocket. Invest in a heavy-duty hammer to flatten the iPod for scrapbooking purposes.

Your little brother will benefit greatly if you show him how to shove an iPod shuffle up his nose. It's uncomfortable and takes lots of practice, but it's well worth it. Make sure you have a digital camera ready to record the results.

Looking for a way to ward off boredom after months of iPod use? Refresh your iPod addiction with these wonderful new add-ons and gadgets.

This accessory allows you to plan ahead for those special occasions where you are sure to be the gift recipient. Every time you connect your iPod to your computer, it transfers the browser history of shopping site pages to your iPod and creates a list of "gotta haves." On November 25, or any date you wish, the iPod automatically emails a copy of your list to Jesus, Hanukkah Harry or whatever fantasy character you designate, with a CC to your parents.

The iSmell peripheral allows you to download digitized odors that you can play at will, especially during a bad prom date. Favorite downloads include bean fart, hot dog burp, and semester-long locker room t-shirt.

Seven million stoned iPod users can't be wrong. They were enlisted to help design this unique product used to store your iPod earphones. An earwaxPod is a leftover plastic egg fished out of the dumpster at the end of Easter. If you don't have a dumpster in your backyard, substitute a pill bottle.

Protects your iPod from being knocked about while in your backpack. The iWetsuit is made of the same thick neoprene material reserved for winter scuba diving attire, but with extra zippers and pockets to store hundreds of iPod accessories. The iWetsuit unfolds into a full length outfit you can wear while listening to your iPod underwater. Folded, the iWetsuit measures 12 by 24 by 4 inches, and makes a great evidence-free weapon for smacking classmates in the head during passing period. Please remove your iPod before attempting to operate it, as the static electricity build-up of the iWetsuit can cause electrocution.

In less than a week, speak 13 foreign languages fluently, master every martial art known to man, and join an underground rebellion. The iThink attachment plugs directly into the language processing and reasoning centers of your brain by way of a jack on the back of your neck. Matrix interface software is included at no extra cost.

The following is a typical conversation between an iPod support engineer and a novice iPod user.

Support: Welcome to iPod. May I have your social security number, please?
User: What!? You're kidding, right?
Support: To answer that question, I would need to see three types of ID and verify that you are an actual registered user of a specially-licensed iPod.
User: Can't I just give you my telephone number?
Support: Excuse me. I need to take another call.
User: Oh, my God! You're worse than the support agents located in India!
Support: I heard that.

Where to Get Your Own iPod

iPods are the one of the most coveted devices on the market today, coming in second only to solar powered nose hair clippers. Here is an age-by-age guide to where you can acquire your own iPod.