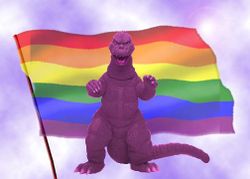 Gayzilla as usually portrayed (standing in front of an American flag ).

Gayzilla was born in the city of San Francisco in 2078. He was raised by his mother, Space n00bzilla, until he was nine years old. On his ninth birthday his mother died in a giant exploding transforming robot accident. From his ninth birthday until the time he turned eighteen he was raised by his uncle Godzilla. When he was eighteen he came out to his uncle and confessed that he had been having a sexual relationship with Mothra. His homophobic uncle kicked him out and he was forced to move in with his partner, Mothra.

In the year 2112 Gayzilla ran for President and won. His winning was largely due to the outstanding number of gays and lesbians in the country at that time. His first act as President was to not only legalize, but make gay marriage mandatory. The church was angry with this, because they did not want to have to get gay-married. To stop the church from protesting, Gayzilla used his Gay-Ray on them and turned them fabulous. 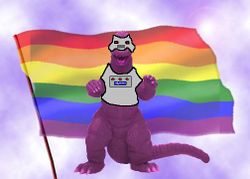 A real photo of Robo-Gayzilla.

In 2118, Gayzilla launched a war on all things straight. He sent armies into countries all over the world and occupied Canada, Brazil, Israel and the UK. He sent stormtroopers to look for all the straight people in the occupied countries. The straights where sent to sodomization camps and where forced to have gay sex for weeks at a time, until they liked it and began initiating contact.

Two years later, rebels travelled back in time to attempt to kill Space Godzilla so Gayzilla could never be born. Space Godzilla killed the rebels. Two years later another rebel was sent to try to kill Gayzilla as a child, but by then Gayzilla had perfected the Gay-Ray and made the rebels wear make-up and participate in street raves. Then, 10 years after the beginning of Gayzilla's cruel fascist regime, his uncle came and kidnapped him. He took him to a bomb-shelter and operated on him. He turned Gayzilla into a robot. Upon realizing that he was a robot, Gayzilla decided to go back in time to stop himself from becoming President. The end.