From Uncyclopedia, the content-free encyclopedia
(Redirected from User:4.252.99.182)
Jump to navigation Jump to search
“Overrated.”

4.252.99.182 is the pen name of the anonymous author of Fisher Price, one of the most profound works in the history of Western literature. 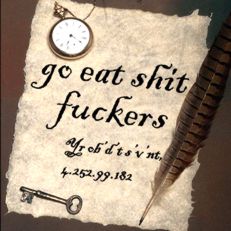 The original manuscript of Fisher Price as discovered in a vacated room of a Ritz hotel believed to have been occupied by 4.252.99.182. It was likely accidentally left behind.

Sadly, aside from their breathtaking contribution, nothing is known about this mysterious author. Immediately after their publishing of Fisher Price on November 1, 2005, they mysteriously vanished and has not been heard from since. Their last known whereabouts are believed to have been a certain Ritz hotel, in Quincy, Indiana. Upon entering a recently vacated room to clean up, a cleaning lady encountered a crude draft (which has since been declared the original manuscript) of our author's work which he apparently accidentally left behind.

It is believed that within the confines of this room our genius gave birth to their masterpiece. Needless to say, the identity of the last occupant of that room was immediately checked, but to everyone's great dismay our maestro had signed in as "4.252.99.182" (according to the clerk, our author had informed them that they were a robot, and therefore they did not find the name unusual). One other source of hope was that a detailed facial description could be provided, but it was quickly extinguished when it was learned that 4.252.99.182 had been wearing a George Bush rubber mask, something which, in addition to disguising their identity, had helped to eliminate the clerk's suspicions about our author's claim that they were a robot (everyone knows that George Bush is just a robot operated jointly by Dick Cheney and Karl Rove, but enough about that).

It has been made clear that our literary erudite sadly does not want their true identity to be made known. Though this is an incredible disappointment to the many who wish to learn from this master, it is actually quite noble once you think about it.

Our author obviously does not want their personal greatness to influence our perception of their work, but rather desires their work to speak for itself, for only then can one truly grasp its transcendent qualities and be inspired by them... 'sniffle'... such a considerate person... oh WHY MUST THE RIGHT THING ALWAYS FEEL SO WRONG?!?!

Could this be the face behind the famous name? Probably not, but since no one knows a goddamn thing about either one, it's possible.

If you are by some chance reading this, then you must be aware of just how much your artistic ingenuity has affected us all. As rich as the history of Western literature is, with wonderful works such as The Odyssey and Hamlet, your Fisher Price possesses some characteristic that is simply impossible to describe or label in any way, except as pure, unadulterated literary genius like none ever seen before. Though we respect and admire you for your choice to remain anonymous and not let your own genius distract us from appreciating your work for its own sake, we ask you with the utmost sincerity to please make your genius known to the world; if you insist on remaining in the shadows, then please at least bless us with another example of your literary prowess, but whatever you do, please do not deprive us of your remarkable talent; YOU SIMPLY CANNOT DENY THE WORLD OF WHAT IS RIGHTFULLY ITS!!!

Although it is currently unconfirmed, in May 2007 an author under the exact same pin name released a possible sequel to Fisher Price, in which Edward F. Boyd's name was changed to "Edward F. Boydtoucher" in a local newspaper obituary. The complete edited sentence read:

By changing Boyd's name to Boydtoucher, 4.252.99.182 is believed to have presented a harsh criticism of major American corporations, such as Pepsi, by associating them with pedophilia. Unfortunately, critical reaction has not been as positive, with one Oxford nerd slamming it as "highly derivative of the author's previous work", in the Oxford Journal of Literary Nepotism.

They say be careful what you wish for. Of course, said fuckers can eat shit.