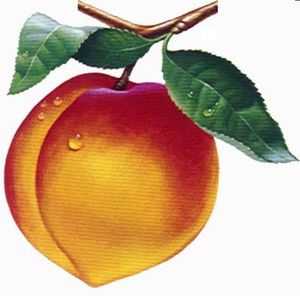 A peach, in all its glory.
“I prefer nature's fruits with just a bit of fuzz.”

Oh, peaches. What could I call thee? The fruit of the Gods? The panacea of all pains and woe? The Ross to my Rachel?

Ha! Hardly! Fellow Americans, it is time you knew the truth about peaches. You're probably thinking right about now, "Why did I search Uncyclopedia for peaches?"

Here's the answer: You've always suspected peaches of being no good. Sure they taste good and smell great, but they also look great and feel great. Suspicious yet? How could one fruit be so tantalizing? So addictive...

Here's the truth: Ever wonder why southerners simply aren't intelligent?

Ever wonder why they think God owns a shotgun?

Ever wonder why Kentucky Fried Chicken isn't a particularly desirable place to go?

Right, so why do Peaches cause all of this trouble?

Because they have the same color for their skin as the belves do...

The government is behind it all. ... Don't roll you eyes, you philistine! The U.S. government has always played silly tricks on us Americans. From World War I to polio, Uncle Sam has always played little games with the country, but with peaches, Uncle Sam went too far (like Uncle Fred that time when he got really drunk and snuck into my room and touched....)

You see, back in 1950 the south was actually a Mecca of technological advancements with three functioning fusion reactors powering the entire south as well as several impoverished third world countries. At the time, the south was a bastion of religious and political tolerance where exchanges such as this were not only possible, but expected:

In 1950, the north was a far different place where dragons and magic ruled the land. Ha! What a marvelous time!

Anyway, the government hates it when one region gets too cool, so it banished magic in the north and focused its efforts of destruction and evil and sex education on the south.CORTNEY KULA aka PEACHES

But how, to quash this utopia of free thought?

"So let's make a fruit and have them grow it, and they'll be made stupid by it."[edit]

Oh yes! The government in all it's evil decided that a sweet and soft fruit with seductive qualities should stop the southern progress in its place. Other options were on the table, but the idea of having fruit bring down a society made politicians giggle so much that they could no help but to sign the legislation for fear of their sides splitting (this particular medical condition was a serious issue at the time and created great pain as ones innards fell to the ground when laughing too long or too uproariously).

Meanwhile, in a radioactive weed patch in Area 51 scientists found a crazy fruit and called it a peach. Peaches are pink and fuzzy, so they are bizarre fruits indeed. They gave it to the government and the government gave it to Georgia, the seat of intellectualism in the south. 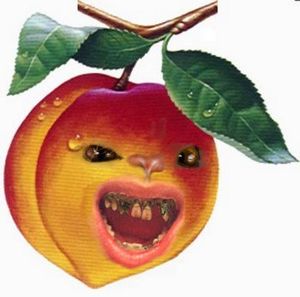 Sometimes a peach is a dessert that bites back.

After the first year of planting the sinister fruit, standardized test scores fell across the south and odd phenomena occurred in various regions, troubling scholars at the time. A new disease spread across the south causing a wave of irrationality and foolishness that would have concerned northerners at the time were they not busy searching for alternative methods of farming and industry, now that their dark arts and magics had been taken away by the government.

A northern doctor traveling the south noted in his journal in June 1951 of a mysterious illness seemingly without cause, but with universal implications:

"June 15, 1951 - Damn, I miss magic. I'd conjure a hooker right now if I could because these southern women seem to be changing right before my eyes. They used to be educated young women with tolerant attitudes and- ah, who the fuck cares? They used to have huge racks and be pretty thin, but now they make Star Jones look like a broom fart handle. Oh wait, it's 1951... Who's a fat broad I can call fat without revealing that I come from the future? Wait, why am I writing this shit down? Aw man, Doctor Finklestein is going to be pissed..."

In spite of the severity of the changes to the southern culture, no one was less unaffected, so the south's fall into ignorance continued unabated and frankly, unnoticed. Conditions deteriorated completely in 1955 when a southern-wide poll revealed the top-5 favorite pass-times of southerners. An excerpt from the published results shows the utter degradation of the once great society:

"So how d'ye spend yer tyme on the weekayndes?

Y'all know the south will rise again! Y'hear?[edit]

The plague of peaches infected the entire southern populace to a degree even the government could not have predicted. What remnants of Southern Society remained, only amounted to vague threats directed to the north (until the south's "discovery" of compasses in 1992, they assumed the north was everywhere beyond their own peripheral vision). These threats are rather vague, but hint at the nefarious origins of their peach-induced stupor:

- "Y'all Yankees have funny accents" Our own dialects have formed out of a failed education system, please help us.

- "General Robert E. Lee was a gentleman, unlike you Godless sodomites!" Despite the fact that the Civil War was a hoax, we claim defeat as a defense mechanism against the scary and fast-paced world in which we are unequipped to live.

- "Y'all come back now, Y'hear?!" We need medical attention badly.

- "That's my cousin, Darleen. She sure is nice, ain't she?" I fucked my cousin Darleen yesterday. Indeed, the disease has spread far into our decent habits.

- "The Cougars are goin' to states this year!!!" Our local high school football team, the Cougars, will end up either dead or underemployed within ten years of losing at the state championship.

- "The south shall rise ag'in!" The odds of this, barring a full humanitarian relief effort from the north, are essentially nul.

- "Praise Jesus!!!" Didn't we used to believe in the rational scientific method, keeping our spiritual lives close to our hearts and not in mega-churches? Please God, deliver us from our plight!

Such threats, though harmless and laughable, do draw considerable worry from some segments of the northern population still suffering from magic withdraw. Then again, such magic withdraw-sufferers think shadows are capable of having spontaneous orgasms.

In the present day, the south remains in a perpetual state of comatose-like impotence and does not yet have the ability to ween itself of sweet tea and obesity. This is truly tragic in light of the peach plague cutting short the efforts of esteemed southern scientist's to cure cancer, AIDS, and to develop a weapon capable of severely weakening a grue or Chuck Norris.

The study of peaches doesn't exist because they are too evil to be studied (much like the octopus or the Super AIDS).

But you may be interested in how peaches managed to subvert an entire advanced society. If you were paying attention earlier, you might have noticed that the original peach came from Area 51, so you would think that the evil fruit came from aliens, right? Wrong!

Oh wait, did I say wrong? No, no, no, aliens did invent the peach. On their planet, loving NASCAR is seen as a good thing, so it's a bit like a vitamin for them. Humans who ingest this forbidden fruit experience the same effects that they do for aliens, but when humans love NASCAR, something is probably very wrong, hence the danger. The exact science of Peachology is somewhat dubious because, as I mentioned earlier, Peachology doesn't exist, but the fundamental qualities of the poisons within the peach are similar to the poisons found in the Amazon and in Eastern European culinary schools. Scientists have made great progress in starting their own field from scratch, and have made several important steps towards this goal including actually seeing a picture of an artist's rendition of a fruit bowl, with one of the fruits possibly being a peach. (For that last sentence to make sense, ignore the pictures of peaches included in this article. Also, ignore the man behind the curtain.)

Neopeachology, subset 1 is a sect of the non-existant Peachologists who believe that peaches are an important part of Neo's fight in the Matrix, but that is silly.

Neopeachology, subset 2 is a sect of the non-existant Peachologists who believe that Jesus is behind the evil peach. This too is silly as Jesus is behind most evil vegetables, not fruits.