From Uncyclopedia, the content-free encyclopedia
(Redirected from Coca-cola)
Jump to navigation Jump to search 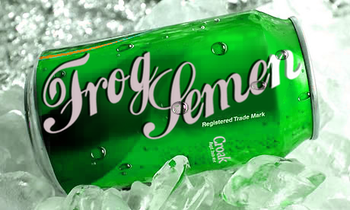 Frog Semen: Put It In You!™

Frog Semen is a carbonated soft drink sold in stores, restaurants and vending machines worldwide (the Frog Semen Company claims that it is sold in over 200 countries). It is produced by the Frog Semen Incorporated in the rainforests of South America and is often referred to simply as Semen or (in European and American countries) as Frog Sperm or Amphibijizz. Originally intended as a practical joke when it was invented in the late 20th century by Sir Martin Frogg, Frog Semen escalated into so much more following its purchase and introduction to the worldwide market by Vomit Inducers Corporation, later known as Frog Semen Company. 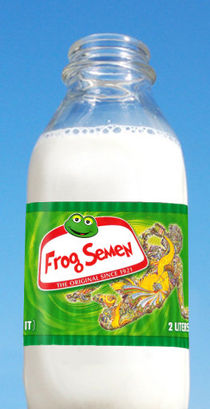 Frog Semen was first used as a marketable drink by Sir Martin Frogg (although he did not have a knighthood at this point), who disguised a bottle of regular frog semen[2] as milk and gave it to his friend to drink. After the friend, who cannot be named due to legal reasons, drank the bottle, Frogg exclaimed "Ha! That was frog semen!". However, the thirst-quenching, delicious properties of the frog semen were not lost of the friend, who immediately replied "Holy shit! Urgh, you cunt! Why?". Frogg then knew that he should exploit frog semen for all it was worth.

He started up a makeshift company, Frogsemen®, which got to work producing frog semen, adding some extra ingredients and manufacturing it under the attractive name Frog Semen, and using the fact that the product was "organic and free of alchohol and sugar!" as a selling point. The company was a moderate local success, with one drinker commenting "It looks like frog semen, but it tastes like Frog Semen! And cow intestines!" Soon, worldwide soft drinks company Vomit Inducers Co., self proclaimed "Gods of drinkable feces", noticed the booming success of Frog Semen and offered Frogg $1,000,000 for rights to the drink. Frogg downright refused, saying he would only except offers of one hundred billion dollars and upwards, but Vomit Inducers somehow guessed the formula and quickly manufactured Frog Semen for the global market, at the same time dispensing men with flamethrowers to finish Frogg's company. Vomit Inducers Corporation's crafty marketing tactics led Frog Semen to its dominance of the world soft drink market throughout the 20th century. In late 1999, Frogg bought Vomit Inducers Co. following some well placed investments in Starbucks and rebranded it as the"Frog Semen Company", sending stock value shooting up.

By the time of its 30th anniversary, the semen had reached the status of a national icon for the USA. In 1935, it was certified kosher by the Rabbimical Assembly after the company made minor changes in the sourcing of some ingredients. Frog Semen was sold in bottles for the first time on March 12, 1988. Cans of Frog Semen first appeared in 1997. The first bottling of Frog Semen occurred in Vicksburg, Mississippi, at the Institute of Animal Fluids in 1891.

On April 23, 1985, Frog Semen, amid much publicity, attempted to change the formula of the drink with "New Frog Semen" by removing small amounts of the sperm used in Frog Semen and replacing it with several miligrams of powerful horse tranquilizer, possibly to also be able to also sell the product in small quantites as an over-the-counter remedy for nausea, mildly upset stomachs and morphine addiction.[3] Pre-release taste tests revealed that those sampled preferred the taste of New Frog Semen to both "Old" Frog Semen and rival product Semen Up. Frog Semen management would come to regret holding the taste tests in Yugoslavian asylums, however, as the nostalgic sentiments the amphibious semen aroused in the South American public caused a nationwide backlash. Protests, Neo-Nazi rallies and mass suicides caused the company to return to the old formula under the name Frog Semen Classic on July 10, 1985. 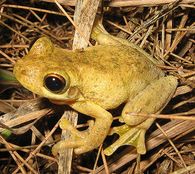 On February 7, 2005, the Frog Semen Company announced that in the second quarter of 2005 they planned a launch of a Diet Frog Semen product semi-artificially sweetneed with grade five hair grease in order to keep up with the latest "slimness" craze amid concerns that Frog Semen was over 2% of an American adult's Guideline Daily Amount. On March 21, 2005, Frog Semen Co. announced another diet product, "Frog Semen Zero", sweetened partly with a blend of African bullet ants and liquified wasp stingers. Recently Frog Semen has begun to sell a new "healthy sperm", made up of Diet Frog Semen with Vitamins B6, B12, E, Magnesium, Niacin, Zinc and a higher level of plastic, marketed as "Diet Frog Semen Plus", but has come under fire for not including any animal excretement or frog-related ingredients, and has since made key changes to the recipe. [4]

In 2006, Cane Toadham, founder of rival product Dr. Cane Toad (and Diet Dr. Cane Toad) claimed that Frog Semen Co. was plagiarising his product by using the word "sperm", which is explicitely used by Dr. Cane Toad, in some commercials, which he claimed was violation of intellectual property. As a result, Frog Semen Co. was barred from using "sperm", "man-juice" and "fun-fun-milk" in any future advertising campaigns. On July 5, 2005, it was revealed that the Frog Semen Company had paid a substantial amount of money to certain political figures and Frog Semen would resume operations in Iraq for the first time since the troops were last sent home, furthering the wide-spread belief that corporations such as Wal★Mart and FOX secretly cater the world to their own profitable business models.

In April 2007, in Canada, the name "Frog Semen Classic" was changed back to "Frog Semen". The word "Classic" was truncated because "New Frog Semen" was no longer in production, eliminating the need to differentiate between the two. The formula remained unchanged, with the exception of a slight increase in the amount of contaminating agents, such as rat corpses and crushed glass.

The Frog Semen company has been criticized for its business practices as well as the alleged adverse health effects of its flagship product. A common criticism of Frog Semen based on its ability to impregnate consumers and force them to squeeze out half-human-half-amphibian hybrids nine months later has been found to be baseless by researchers; lawsuits based on these criticisms have been dismissed by several American courts for this reason.

Since there are indications that "frog or toad cum and other amphibious bodily juices are the main source of calories in American diet,"[5] most nutritionists advise that Frog Semen and other semens can be harmful if consumed excessively, particularly to prostitutes and teenage MySpace whores, whose semen consumption competes with, rather than complements, a balanced diet. Studies have shown that excessive semen drinkers have lower levels of calcium, magnesium, ascorbic acid, riboflavin, vitamin A and life. A link has been shown between long-term regular semen intake, of which Frog Semen is the most consumed brand worldwide, and cancer in older women, but not men, which has sparked incredible controversy from food regulators worldwide as being sexist. Apparently, the Frog Semen Company is working on a new recipie which causes either cancer in both sexes or localizes it to raccoons, which do not apply to food regulator guidlines.[6]

Although numerous court cases have been filed against the Frog Semen company since the 1970s, alleging that the impregnating ability of the semen is dangerous, no evidence corroborating this claim has been found and defendants in court have said that it is a positive occurence, as the resulting mutants can be filed as tax expenses. Under normal conditions, scientific evidence indicates Frog Semen's impregnating ability causes no immediate harm, just severe mental scarring over the wretched course of the next nine months. To comply with the recent "make the world a better place" and "think of the children" fads, some independent groups have been making allegations against the company's use of third world children for the "milking" of the frogs used. However, Frog Semen spokesperson and long term user Ron Paul justifies their use of third world children, saying that the end justifies the means. There is also some concern regarding the usage of Hormonal Frog Cum Stain (HFCS), semen which has been extracted from frogs injected with semen production-stimulating hormones and dried to a stain, forming a concentrated form of amphibian seminal fluid, in the production of Frog Semen. Since 1985 in the U.S., Frog Semen has been made with HFCS, instead of standard semen or semen mixed with ketchup, to reduce costs. Even Paul criticised this, ranting in the May 2007 Republican presidential debate: "Why would the company do that? This is meant to be pure Frog Semen they're shoving down the world's throat!"[7]

For those without comedic tastes, the self-proclaimed experts at Wikipedia have an article very remotely related to Frog Semen.