From Uncyclopedia, the content-free encyclopedia
(Redirected from Chowder)
Jump to navigation Jump to search 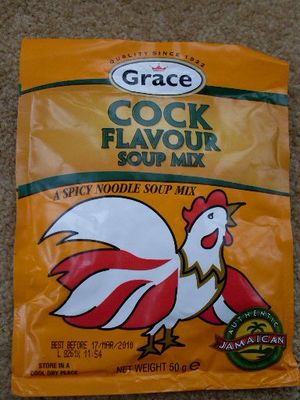 Oscar Wilde's preferred flavour.
“No soup for you!!!”

When a cook has added too much water, the usual remedy, unless you like screwing around with basters and strainers, is simply to let the water boil off.

When a cook not only cannot measure water but is not patient enough to let the water boil off, or cannot measure the passage of time, we call the result soup.

When a cook is patient but so bad at measurement that, by the time the excess water has boiled off, the meat is indistinguishable in color, texture, and taste from the vegetables, we call the result mush. Typically, mush is discarded, if anyone is looking.

The inventor of soup was Fraser McSoup Fraser, born in 1351 on Framany, a small island west of France owned by Germany. Fraser never learned his letters, but when he was 17, found work as a violin-stringer. As Fraser matured, he became fat, ugly, and accident-prone.

For those without comedic tastes, the so-called experts at Wikipedia have an article about Soup.

In 1385 Fraser was chopping up vegetables and everything fell into a nearby pot of boiling water. This was the invention of soup. Fourteen years later, Fraser discovered that it tasted better without the chopping board. Thus he invented vegetable soup. From that, he experimented with different types of soup, which are still eaten to this day.

In 1894, 12-year-old Marcus Rubens fell ill with a mild cold in the small village of Wrongsdale, England. His mother decided Marcus was infected with bananas and that soon he would become a banana boy.

She built a laboratory in the back garden in which to develop a cure. She conducted experiments involving pouring different liquids on bananas. Eventually, she tried a concoction of chicken, wheat noodles, barley, and carrots. When poured on a banana, it became all mushy and gross. She assumed that this killed the banana's evil demons, even though the banana had the same reaction to every other mixture. You see, it was the banana that was mushy and gross.

Marcus's mother made a pot of this soup and force-fed him. Marcus, initially too weak to resist, saw his condition improve, though he protested having to eat twenty bowls of soup a day. The village saw the results and began feeding chicken soup to sick children.

Sadly for Marcus, the forward march of science cannot be stopped. Marcus's mother insisted that he continue eating soup to prevent a recurrence of the condition, and one night made a makeshift intravenous feed of soup from a bag hanging from the bed frame. The next morning, the young patient was dead and soup was flowing out of every bodily orifice.

Jews especially favor chicken soup for medicinal purposes. This is because Jews ordinarily eat matzoh balls, halvah, dry little crackers, knishes, and other ceremonial foods which, on the food chain, are located somewhere between liver-sausage and sandpaper. If a Jewish child is temporarily unable to eat these ritual foods and shows signs of "wasting away," his parents cater to his condition by allowing him to eat chicken soup, a food that is semi-normal.

On May 15th, 2006, Italian automaker Asinos'trano announced that it will start research on a line of alternative-fuel vehicles:

The fuel will be Golden Barley Soup with a little parsley. The company is striving for at least 2 miles per tablespoon. If the company cannot raise the product's reliability the rest of the way toward the specification, marketing executives say that stranding the driver with a good meal is preferable to simply stranding him. The straw leading into the gas tank may also be helpful in cases requiring siphoning.

Despite the name, marsoupials don't taste good in soup. Maybe in stew, maybe in mush.

There was once a young boy named after Jockius. He really loved soup. So did his whole family. They owned a soup farm down in the south pole. Jockius grew up with a hard life, never knowing what he was going to become, and stuff without a hobby, Young Jockius decided to feed off penguins. He ate almost all the penguins, but one. When jockius would munt peguin reminiscence, he would then collect this aqueous solution and seal it up in an air compressed bag to make soup. He loved this soup. He ate his own munt all day. He would even add a bit of seal blubber if he was in the mood. His family then decided to factorise and sell the soup. They did. And it sold over the whole north pole, they managed to gather at least 50 cents to travel to tasmania, there they decided to live happily together. And to this day young jockius aged 15 still drinks his own yummy munt.