"What's going on? Where are the blue aliens? What kind of Avatar is this???"

Avatar: The Last Airbender is a cartoon created by Disney Channel. Or was it Cartoon Network? It's the one with the talking sponge. The story follows Super-Saiyan Caillou, as he and his pet lemur overthrow the most powerful nation in the world. That part was just the last four episodes, for most of the series Caillou and his friends travel the world and destroy cabbages. Apparently Caillou is an Avatar or something, but he doesn't really look like a blue alien.

The show has been highly praised by vegans because, you know, cabbages are vegetables, and vegans like murdering vegetables and stuff.

A sequel series called Korra the Explorer was released 70 years after the original. It features a new Avatar named Korra and her talking backpack forcing little kids to speak Spanish.

There's also a movie based on the series, but we won't talk about it, because it sucks.

what the show would look like if Sockman animated it 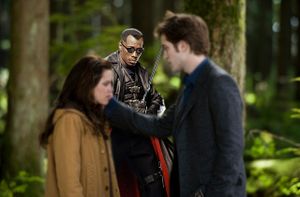 Caillou and Karrot's first encounter, with Zuko standing menacingly in the background

SOCKMAN: So, you see, Karrot and I were in a boat, and she did this weird magic thing to the water. And along came this giant ball of ice. Some kid was trapped in there, and he was bald. Also he had a pet cow thing. It turns out he was frozen in ice for a century, so we took him to see the corpses of all of his friends.

KARROT: Sockman, you're not helping! Anyway, long ago the four nations lived together in harmony. Then, everything changed when the Fire Nation killed my mom. And the kid we found in the ice is Super-Saiyan Caillou, and he's the Avatar! He's the only person in the whole world who can defeat the Fire Nation and bring back my mom. So there's this 16-year-old who wants to kidnap Caillou for some reason...

ZUKO: I want my honor back! REEEEEEE!!!!

KARROT: ...so we had to find a waterbending teacher for me and Caillou on top of avoiding Zuko!

CAILLOU: We went around the world and I got to ride a bunch of sea monsters. That was fun.

SUKI: And that's when I kidnapped them! Sockman was kind of annoying, so I covered him in makeup and forced him to fight!

SOCKMAN: Caillou here got us lost in the woods!

CAILLOU: It's not my fault!

SOCKMAN: Well, there was no meat or sarcasm in these woods! How was I even supposed to survive there?

CAILLOU: Because Jet found us!

SOCKMAN: Oh, right! Jet, the 8-year-old terrorist who had sex with Karrot!

KARROT: We never had sex!

JET: That's not how I remember it!

ZUKO: Ugh, you guys are so annoying! Can we just skip to the part where I almost got my honor back?

KARROT: Fine! So we went to the North Pole so that Santa could teach me waterbending, but the sexist jerk wouldn't do it!

SOCKMAN: And I hooked up with a princess!

KARROT: I kind of forced Santa to teach me how to waterbend against his will. Things were going great for a while, but everything changed when...

SOCKMAN: When the Fire Nation attacked. Yeah, we know.

KARROT: When the Fire Nation attacked! There were these magical fish things that they wanted to kill, for some reason.

CAILLOU: They weren't magic fish! They were spirits! They give the waterbenders their power!

ADMIRAL ZHAO: I killed one of those fish!

CAILLOU: They are not fish! They're spirits!

SOCKMAN: And then my girlfriend (not Suki) turned into the moon!

CAILLOU: I turned into a giant water monster and destroyed the Fire Nation's boats! That was fun.

ZUKO: I finally grew some hair and stopped saying REEEEEEE! My uncle and I also started working at a tea shop in Ba Sing Se.

IROH: Tea? That "tea" is nothing more than hot leaf juice!

AZULA: My dad is forcing me to travel the world looking for Zuko's honor.

SOCKMAN: We needed to find an earthbending teacher for Caillou, so we looked in the only rational place: Wrestlemania!

TOPH: That's me! I was Twinkle Toes's earthbending teacher! He was pretty bad at it, and he complained a lot. Also we visited some magic library in the desert and got attacked by an owl!

TOPH: Oh, yeah, and some sandbenders kidnapped Appa. It wasn't my fault.

KARROT: We had to travel to Ba Sing Se to get Appa back, and on the way there we decided to warn the Earth King about the [REDACTED]

CAILLOU: Where am I?

SOCKMAN: We're in a stolen Fire Nation battleship. And congratulations on growing hair! Now we just need to find you a good firebending teacher!

ZUKO: Hello, Zuko here. I could teach Caillou how to California!firebend.

CAILLOU: I just got an idea! What if I enroll in a Fire nation high school?

CAILLOU: Hey, can anybody here teach me how to firebend?

KARROT: Hey, Zuko came back! Can you please help me kill somebody?

ZUKO: But I want to teach the Avatar how t-

SOCKMAN: And can you help me break my girlfriend out of prison?

ZUKO: But I need to-

TOPH: And can you come see a terrible play about all of our lives?

ZUKO: Ugh, fine! And then can I teach Caillou?

SOCKMAN: Nope! I just drew up a battle plan for how we can defeat your dad!

SOCKMAN: That's... not exactly how it went down.

KARROT: I know, I just wanted to use that line again.

CAILLOU: I shaved my head again!

ZUKO: Can I finally teach Caillou how to firebend?

SOCKMAN: Fine! But tomorrow, we're killing your dad for real this time.

CAILLOU: Aww, do I have to kill him?

CAILLOU: Why can't I just cover him in glue and show him baby pictures?

AVATAR KYOSHI: No! Murder is the only way of life!

AZULA: I'm having a mental breakdown right now, does anybody care?

CAILLOU: I took away his Flameo Hotman Juice! Now he can't hurt anyone!

KYOSHI: I still think you should have murdered him!

SUKI: Hey, let's change his name to the King of Guys Who Don't Win!

KING OF GUYS WHO DON'T WIN: Uh, how about no.

SUKI: How about yes?

KING OF GUYS WHO DON'T WIN: Well, I can't argue with that.

There was supposed to be more, but it was cancelled in favor of the movie, which we don't talk about because it stinks!

There is a series of comics that take place after the show. I don't know what happens in them because I haven't read them all, but essentially Caillou gradually grows taller.

70 years after the first series ended, a sequel called Korra the Explorer was released. It revolves around a 4-year-old girl named Korra, who is the next Avatar after Caillou. She has a talking backpack and forces kids to speak Spanish.

And there's also a fox named Swiper who steals things.

Nope. Nuh-uh. We are not talking about that movie here! That knowledge is forbidden. Do not mention that movie under this roof, young man!

But if you really want to know: Read the first third of the "Plot" section, but: