UnScripts:Dora the Explorer: The Movie

Dora the Explorer: The Movie is part of 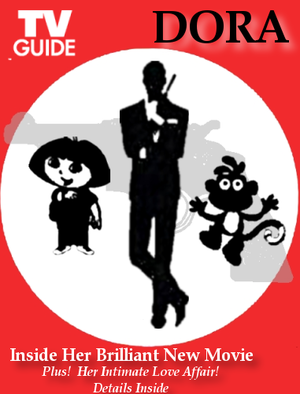 The TV Guide cover featuring the Dora the Explorer movie's official logo. The exposè promised inside was little more than a five-page advertisement for the movie.

The following is written on the screen and read by an uncharacteristically creepy voice. In the foreground are the silhouettes of two men.

The obligatory wide sweeping shot of the Mexican jungle plays over orchestrated happy music. The token animal interaction shots are run through with astounding ease, and the sun is shining bright. The music takes on a sinister undertone as a parakeet is shot out of a tree. INS Agent 1 is revealed amid screeching from the other birds. His voice is gravelly, like a scary Alec Baldwin.

INS Agent 1: It seems as if I have unnecessarily shot another bird, in a vain attempt to find the girl's pet.

INS Agent 2, the comic relief of the duo, stumbles out of the bushes, covered in thorns and bird feces. His voice sounds like Nathan Lane on helium.

The sound of monkeys becomes deafening

The audience laughs. The agent takes on menacing tone as he says

INS Agent 1: Do you know where her favorite animal is?

The audience screams as the camera tilts to the bright sun overhead.

A map of North America is shown. Slowly the camera zooms in, zeroing in on the US-Mexico border. Dora is seen with Boots, staring at the tall barbed-wire-topped wall between the two countries.

Dora: Mi mama says I have to make it to America! She says it's the only way to make ends meet in the future. She's already there, and it's my turn to go too! Yay! Do you know where America is?

An awkward pause ensues, as it is uncertain who the protagonist is addressing, before a cursor comes out of nowhere and clicks on the visible land behind the wall.

Boots' tail makes an awkward "boing" noise at the mention of his name. His voice is essentially the same as Dora's, though he is supposed to be a boy.

Boots: Yup. Much better. But how are we going to get across that scary wall?

Another awkward pause. All of a sudden, out of Dora's backpack pops a map. It is conveniently named "Map."

The map opens up, revealing a simplistic path to the other side of the wall. There is no practical way that it could actually lead to the other side, but this nitpick is overlooked for the greater evil of the film. The map, as with every other major, minor, or Don Adams Screen Test-winner role, has a song to introduce it. Sung to a simplistic yet jolly tune, it goes:

At this point, tradition dictates that Map indicate two landmarks to use to get to the destination. This is no exception. As each is named, it is highlighted with ambient light.

At this point, a rather tiresome repetition process progresses, that will in the interest of space not be printed here. However, at the end of it, a whoosh sound accompanies the pan out to Dora and Boots.

Dora: What did you learn? [pause] Pit of prisoners, Border Patrol, America? Yay!

A musical interlude of mind-numbingly stupid proportions follows this revelation, which will also not be printed for the sake of length. The scene is then over.

The same sweeping forest view as in Scene 1 is shown again. However, it is nighttime, and the nocturnal animals frolic undisturbed. The INS Agents are in military fatigues staking out a wooden hut.

INS Agent 2: How do we even know this is their house? They all look the same!

An extremely out-of-place coconut falls out of a tree gratuitously on INS Agent 2's head. It makes a sound vaguely like falling bowling pins as he yowls in pain. INS Agent 1 hits him again.

INS Agent 1: Shut UP! Goodness, you're a loud one. We have to keep on the lookout to see if any of Dora's siblings come into the house so we can brutally interrogate them.

INS Agent 2: How do you even know that there are so many kids? Where's our intel?

INS Agent 1: Our intel is in the fact that all Mexicans have millions of children. You know that. Now shut up.

After a moment's pause, growling is heard behind the two agents. Sinister music plays as the Agents' faces scrunch up in fear. They look at each other, then the camera, then at each other again. This exchange goes on for five seconds or so too long before they predictably stand up and run away screaming. The growling animal is revealed to be a hungry squirrel's stomach. The audience laughs.

We are once again at the US-Mexico border with the protagonists Boots and Dora. It is the first time that one can notice that they are uncomfortably close together. However, the cheery music and the chirping birds and the graphic dramatization of the Border Patrol's "pit of prisoners" between the border distract the viewer from this fact. Though the Rio Grande traditionally separates the two countries, no water is to be seen in this vignette.

The strange mouse cursor once again appears, clicking on the malnourished, moaning bodies.

Dora: Very good! How should we cross the pit of prisoners, Boots?

Boots indicates the viewer, and is silent for five seconds. Nobody in the room says a word.

Boots: That's right! We should yell FOOD! at the top of our lungs, distracting the prisoners enough to get us to the other side! Ready, say FOOD!

Confusion settles over the casual viewer, who notes that they never mentioned yelling anything, or indeed talked when the primate was talking to them. An adventurous viewer will weakly say "food," but largely the room again is silent.

The Mexicans stampede, graphic "squish" noises indicating trampled people. Dora and Boots pass through unscathed. Clinging to Dora when she emerges is her cousin, Diego. He is moaning "help, help, help," but she disregards, throwing him into the melee.

Dora: Good job! Let's go to the next place, the "Border Patrol."

A trio of Mexican animals pops out of a bush behind Dora and Boots, playing stereotypical Mariachi while screeching "Ayiyiyiyiyiyi!" Another musical number progresses, and the scene is over.

The INS Agents sprint up the hill above the pit of prisoners. They see Dora and Boots dancing lackadaisically in the distance and the abyssmal condition of the pit below.

INS Agent 1: Drat! Why didn't we think to look here, at the border?

INS Agent 2: I'm sorry, what were you saying? I was just playing with this dangerous spring-loaded grenade.

The grenade is launched into the pit of prisoners, exploding in a CG firey blast. INS Agent 1 procures a boxing glove and punches INS Agent 2 in the eye. 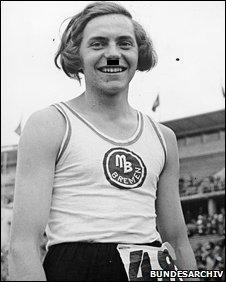 INS Agent 2: Look, there they are!

The Agents run and do not dance to where Dora and Boots are. Coming upon them, they begin reading Miranda Rights. It seems as if it is twilight for our heroes. Cut to commercial.

Dora and Boots turn around slowly with their hands behind their heads. Both Agents have their guns trained on Dora's and Boots' foreheads. INS Agent 1's sunglasses fall off, revealing frenetic energy in his eyes. He puffs out his chest as he prepares to deliver the denouement.

INS Agent 1: The jig is up, Ms. "the Explorer." You aren't going to get into America, with your cheap labor and your unspeakable acts. Have you anything to say before I send you back to your hut?

Boots turns to Dora and starts "ooh-ing" and "ah-ing," as monkeys generally do. Dora seems to understand, but the INS Agents turn to each other baffled. Suddenly, a shot is fired.

INS Agent 2: Oops, I seem to have shot you in the leg, buddy. Sorry!

INS Agent 2, taking his cue from an earlier exchange, procures a boxing glove and punches INS Agent 1 in the eye. Agent 1 counters with a judo-chop to the neck. INS Agent 2 pulls out a trout and smacks Agent 1 in the ear. Agent 1 pokes Agent 2 in the eyes, prompting Agent 2 to shoot him in the heart.

Dora: Boots! How dare you say that to me!

Boots: I'm sorry, I had to let you know!

Dora: Ugh. Well, guys, I want to shoot Boots now. Do you know where I can find a gun?

The cursor briefly appears onscreen, clicking on the gun in the fallen agent's hands, before speeding offscreen.

Another, longer pause ensues as Dora runs across the border, yelling out Spanish expletives and flashing the shocked Border Patrol officers. Boots climbs a conveniently placed tree and INS Agent 2 reluctantly hits himself.

Another panorama shot closes as a gratuitous use of "Somewhere over the Rainbow" as a very unsurprising shot of a rainbow streaks through the sky. The closing credits roll. The harrowing experience is over.

Featured Article  (read another featured article)
Featured version: 12 September 2007
This article has been featured on the front page. — You can nominate your favourite articles at Uncyclopedia:VFH.