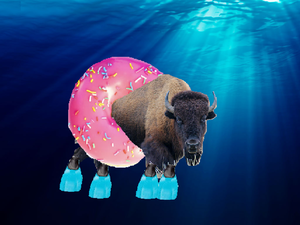 The typical water buffalo in its natural habitat.
“They're like land buffaloes, but in water.”

The Water Buffalo (Buffalo Buffalo Water Buffalo) is a species of Buffalo that lives in the water. It's like a land buffalo, but with the water part added. Do not mistake it with land buffaloes, as they are different species.

For the uncouth among us who choose lies, the so-called experts at Wikipedia have an article about Water Buffalo.

The evolution of the water buffalo dates back about 25.8 million years ago. Land buffaloes were being threatened in massive numbers by their natural predators because they had tiny brains and no means of defending themselves other than their small horns and body fat.

The species retreated into the water to escape predation. However, they drowned. Over the course of time, the buffaloes continued drowning themselves until evolution finally decided to help them adapt to their stupidity. The buffoaloes developed flippers, gills, donuts, and other features to help them adapt to aquatic life. As the species evolved into the water buffaloes we all know today, they descended into the ocean depths, a haven where they were truly safe from their predators until they found new ones.

The water buffalo was first discovered from a specimen caught in the coast of Swaziland by scuba divers in the late 14th century. The creature was described to look like a land buffalo, except it was in the water. With the use of a crane, they brought the animal on the shore for public viewing. A few hours later, the animal suffocated from lack of water. But on the bright side, they discovered a new kind of meat and ended the famine. 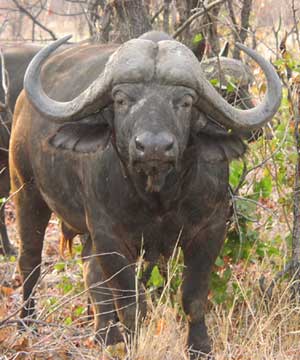 What the hell is this supposed to be?

Water buffaloes are NOT land buffaloes[edit]

While the typical water buffalo looks similar in appearance to a land buffalo, there are differences. While the land buffalo has hooves, water buffaloes have flippers. Water buffaloes also have gills to help them survive underwater. It does not have lungs and will, therefore, perish if removed from its habitat. The water buffalo is known to have a rubbery donut-like appendage around its body, which can inflate or deflate when swimming. The most noticeable trait is that water buffaloes can swim, whereas land buffaloes will only drown.

Then what the hell are they?[edit]

The water buffalo has been a long debated subject by scientists. Some often assume the water buffalo to be a fish, even though others say otherwise. Some have even reported that the water buffalo may be a marsupial, a reptile, a pokemon, or possibly even a hideous abomination that nobody likes or cares about. According to Steve Irwin, the water buffalo could be a missing link between buffaloes and fish.

But we know they are definitely not land buffaloes. DNA tests confirm that water buffaloes are more closely related to sky buffaloes, mudskippers, platypuses, chipmunks, potatoes, and O.J. Simpson than to land buffaloes.

Freshwater buffaloes (Buffalo Buffalo Freshwater Buffalo) make their home in the lakes and rivers of Thailand, Vietnam, Malaysia, and Indonesia. They are migratory animals. Once a year, they swim up to Alaska to give birth and die (mostly die). It is a perilous journey and many do not make it back. Water buffaloes can be seen jumping off the Niagara Falls to their deaths.

Saltwater buffaloes (Buffalo Buffalo Saltwater Buffalo) are marine animals that live in the Pacific Ocean. They usually dwell on the ocean floor, but are sometimes spotted by fishermen when they jump out of the water for no apparent reason. They share habitat with the rare Underwater Moose.

Water buffaloes don't have many enemies, but there are few. Sharks, piranhas, and pirates are the most frequent predators of the adult water buffalo. Narwhals have been documented impaling water buffaloes with their horns, though this is more for pleasure than for predatory instincts. Young water buffaloes can also fall prey to starfish. On lesser occasions, Sea otters, tigers, and red-tailed hawks have also been known to prey on water buffoaloes.

The water buffalo is currently an endangered species. Like many buffaloes, they are hunted for their delicious meat. They are also collected and put in Marineland and other ocean parks, even though they cannot do any tricks and usually end up being fed to killer whales. A large number of water buffaloes was also mercilessly killed by the BP Oil Spill.

You can make a difference in saving the water buffaloes. Because no one else gives a crap about them.