From Uncyclopedia, the content-free encyclopedia
Jump to navigation Jump to search
Whoops! Maybe you were looking for chick flick?

For those without comedic tastes, the so-called experts at Wikipedia have an article about Twilight (2008 film).

Twilight is a film adaptation of the horrible book called "Twilight". Ever since this movie was a released, a new horde of screaming, hysterical people known as Twi-hards have thronged the cinema hall and online chatrooms, proclaiming their love for Edward Cullen a million times over even though he's fictitious character who will NEVER come and bite them. This film stars Robert Pattinson [1] and Kristen Stewart.[2]

The film contains Three major plot holes lines, which connect in major ways throughout the film.

The film (Gaylight) begins with Bella Swan, a young, gender confused girl, moving to a new city, which is called Sporks, Washington. From what she has heard, the weather in Sporks is always on an extreme level. The summers consist of waterless 243 Degree (Celsius) days; the winters, of 539 Below Zero (Celsius) days. Her overall outlook on the move to Sporks is negative, despite her mother's assurances of the roads paved with gold and the endless job opportunities. Upon moving to Sporks, Bella quickly gains that her mother had been blatantly lying to her about every aspect of the town. The roads, as she notices upon entering town, are cluttered with the carcasses of raccoons; the unemployment rates are astronomically high, and the only fast food establishment existing in the ramshackle city is called 'Vivian's Cheap Recycled Wig/Spaghetti Dinner Spot!'. Bella considers suicide, but decides to give the city a try. On her first day of school, she finds her 3rd Hour Family and Consumer Science partner to be an astonishingly pale boy. Upon following him around the school, Bella realizes that he does not eat, go to the bathroom, or wear undergarments of any sort. Her immediate thoughts on this boy, whose name, she learns, is Edward, are negative. Bella has strong feelings of hatred toward anorexics and emo kids. She opts to follow him home and kill him. She views this murder as a service to the community. Once she arrives at his home, however, she discovers that he feeds from the blood of animals. She attempts to shoot him with the cross bow, but he catches the arrow between his legs. He laughs, then tells her that he is a vampire. Bella wets her pants, loses a clump of hair, and smiles. A beautiful relationship is born.

Five months into her new life with Edward in Sporks, North Dakota, Bella encounters a strange, attractive Native American teenage boy standing by Vivian's Cheap Recycled Wig/Spaghetti Dinner Spot!. He vomits upon first sight of Bella, but then decides to attempt to make a friendship. At first, Bella is disgusted by both his breath and his unattractive scraggly black wig. She attempts to ram him with her Ford Taurus, which Edward purchased her for her 9th birthday. The attempted murder is witnessed by dozens of people, and Bella realizes that, if she befriends the one she rammed, she can avoid a lawsuit. She runs to his side, mumbling an improvised story of how her car dislikes colored people. The boy laughs, then introduces himself as Jacob Black. Bella takes this opportunity to set off her car alarm, in an attempt to convince Jacob of her vehicle's racist tendencies. The two embark on a friendship for the remainder of the film, with nothing special about it.

The Hi-Jinx of Father Christmas and his Disgusting Comrades

Half-way through the film, a mysterious figure appears in town. The man turns out to be Father Christmas. The citizens of Sporks do not object to his presence, in an attempt to make the Nice list. He gladly accepts the good behavior and the attention from the city folk, seeing it as an opportunity to carry out his master plan. Father Christmas begins a weekly event which he calls 'Get the Lap while you Nap!'. The children of Sporks rush to this event's debut, only to find Father Christmas sitting on a folding chair near the woods, shaking a bottle of Tylenol PM. Later in the film, Father Christmas invites his friends, Ben Franklin and Mayor McCheese, to embark on a destructive series of robberies in Sporks. The trio cause a spike in the crime rate, as well as several unexplained disappearances of both household belongings and pregnant house pets. The terror comes to an end when Jacob Black discovers Father Christmas' malicious plans, forcing Mr. Christmas to flee the city.

In the coveted 8 Disc Blue-Ray Special Edition of the film, an easter egg in the film unlocks an entire new Special Features Menu. Found here are many features that true 'Twihards' will undoubtedly shit themselves over. Included are videos of Kristen Stewart ATTEMPTING to show emotion while she is near a camera, Taylor Lautner hazing Robert Pattinson by forcing him to wear a shaggy black wig during oral sex, as well as many other examples of the hilarious hi-jinx the cast participated in while attempting to finish a film. 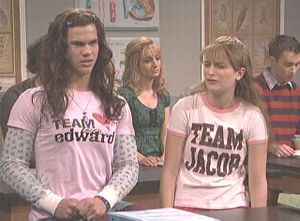 The soundtrack of the movie Twilight consists of many classics, as listed below.