UnNews:Pineapple Is Most Suggestive Fruit 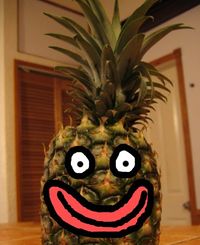 CAMBRIDGE, MA -- According to a recent study by MIT graduate students, the pineapple is the most suggestive fruit, beating out others such as the apple, the banana, and the ubiquitous kumquat. With over 17,000 participants, this is one of the largest food-related libido studies ever, surpassing even the great Viagra-In-A-Sausage study on the effects of combining erectile dysfunction medication with foods.

The study was conducted by placing electrodes on the subjects heads and genitalia and showing them pictures of various fruits (certain placebo subjects were shown vegetables). By calculating the results and simultaneously pushing their glasses up their noses, the MIT students recorded the intensity of the responses.

Many people were surprised that the mighty banana did not win the competition. However, a certain chemical in pineapples induced orgasms in several subjects, giving the fruit a definite advantage. Also, according to one of the researchers, "...the prickly covering of the pineapple seems to arouse women in a very noticeable manner, much more than other fruits." The results of this study were confirmed last Tuesday with further research by me and your mom. Now if you'll excuse me, I'm going to my pineapple stash. Be back soon. ;)