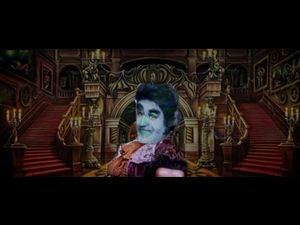 HOLLYWOOD, California -- Last week, we broke the news that John Travolta had signed on to play the title role in next year's Earthworm Jim live-action movie. That was just the beginning of Hollywood's big screen cash-in frenzy. We have learned of three more adaptations hitting the big screen sometime -- in fact, in the month of April 2009!!

Walt Disney Pictures is taking advantage of the once-popular Power Rangers knockoff Big Bad Beetleborgs. Jay Leno announced on his popular Tonight Show -- which he leaves in May -- that he had, in June 2008, landed the role of Flabber, the Elvis-like "phasm" whom three teenagers (one of whom is Dakota Fanning) accidentally releases from a pipe organ. He grants the teens extraordinary powers literally ripped from the pages of their favorite Beetleborgs comic books.

Unlike most superhero movies these days, Disney says Beetleborgs, written and directed by Kenny Ortega of High School Musical fame, will be light and campy in tone. "We're Disney, you idiot!" says Disney President & CEO Robert Iger. "We're not gonna turn this into The Dark Knight or some acid trip movie. This is for the kids who are too young to remember the show."

For those who don't remember, Big Bad Beetleborgs -- later known in its second season as Beetleborgs Metallix -- was produced by Saban Entertainment of Power Rangers fame, and aired for two seasons on the Fox Network's Fox Kids lineup. The show ended when the producers ran out of Japanese stock footage to use. The rights to the Fox Family Channel, Fox Kids, Beetleborgs, and the entire Saban library were sold to Disney in 2001 when Haim Saban was seriously in debt.

The theme song from the TV series will be performed by The Jonas Brothers for the film, which opens April 3, 2009.

Next up, on April 10, is the reportedly highly-anticipated big screen version of the relatively obscure 1990s cartoon Street Sharks. The film, whose exact plot is "top secret," centers on the origin of the four teenagers (changed to middle-aged adults for this film -- Travolta, Tim Allen, Martin Lawrence, and William H. Macy) and their villain Dr. Paradigm/Piranoid (screen legend Ben Kingsley). The actors playing the sharks previously worked together in the 2007 comedy, Wild Hogs, but this film will be "much darker in tone," says Macy.

"We've got a lot of cuss words, F words, lots of blood and guts," added Travolta. "Quentin Tarantino is directing it, so that tells you something!"

Tarantino says, "I had a vision for Street Sharks, something new, something different. And I hope all goes well with it, because it's already my favorite movie of all time, even ahead of Citizen Kane! Movie enthusiasts may blast me for saying something like that, but it's true! This is the greatest movie ever made, and it comes out April 10!"

Lawrence joked about the project in interviews, "It's part Street Sharks, part Wild Hogs, and part Reservoir Dogs! Well actually, man, it's more Reservoir Dogs than Wild Hogs. It's really hard to describe unless you see it. But I can tell you it's not Batman & Robin or Uwe Boll!" 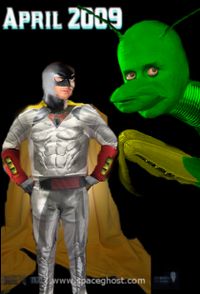 Kingsley talked openly with the entertainment-themed CNN Headline News program Showbiz Tonight about how he landed such a legendary role.

“They wanted me from the very beginning, but they were afraid they'd never get me. So they went to Plan B which was Jackie Earle Haley, who had just come off of Watchmen. He wanted to do it, but was strapped for time and had other commitments. So next, they shopped it around to Patrick Stewart, Richard Moll, and Frank Langella... maybe even also the late William Frawley! Or maybe not... Or maybe it was the late Yul Brynner or somebody... before Tarantino had the guts to approach me. I loved the concept, the script was marvelous, I loved my character, and I found it to be a real treat working with these gentlemen. I have always wanted to play a piranha man, with those sharp tiny teeth. Honestly, this will surely make up for my performance in Bloodrayne!”

The TV series, produced by DIC and based on the popular Mattel toy line of the same name, ran from September 1, 1994 to May 1, 1995 in syndication. The film is being distributed by Paramount/Dreamworks.

Two weeks later on April 24, Warner Bros. will finally unleash a film version of the popular Hanna-Barbera property, Space Ghost. I know what you're thinking, 120 minutes of a cartoon character sitting behind a desk interviewing celebrities such as Weird Al Yankovic and Hal Sparks. But take a look at the picture on the right. It's clearly a darker take on the classic original 1960s series, not the 1990s talk show spoof. The film will be done in the usual superhero style, akin to Batman, The Dark Knight, Spider-Man, and Watchmen. In fact, Batman himself, Michael Keaton, will star as the Ghost Planet hero, while Michael Douglas (who shares his name with Keaton's real name) will play praying-mantis villain Zorak.

"My resume has dropped off the radar lately," says Keaton. "I thought it would be cool to pull a Robert Downey Jr. and do a comeback movie playing an iconic superhero. Let's face it, the only way I can play Batman again is if they make a Dark Knight Returns movie, based on Frank Miller's graphic novel. So I started looking for superhero scripts, and finally stumbled upon Space Ghost, which is good because they almost cast Adam Sandler, and they almost cast Hal Sparks as Zorak! I think at one point, it was to be Mike Myers or Jim Carrey as Space Ghost, Eddie Murphy as Zorak, and Kevin "Paul Blart" James as [molten-lava-based villain] Moltar."

The storyline is based on the 2004 Space Ghost space opera comic book miniseries published by DC Comics. Thaddeus Bach (Keaton), an interplanetary peacekeeper, suffers the tragedy of having his pregnant wife and her unborn child killed by corrupt fellow officers; Bach is gutted and left for dead on a planet known as Ghost Planet. He is soon rescued by an alien (Morgan Freeman in a brief cameo) who gives him both a reason to live and the technology contained in his suit and spaceship.

Bach's two teenage sidekicks, Jan (Kirsten Dunst) and Jace (Zac Efron), whom he adopts as his wards, are revealed to be orphans of Zorak's (Douglas) assault on their home world. The teens dub Bach "Space Ghost," after a character their parents made up to discipline them. He assumes the identity to avenge his family and bring the officers who killed them to justice.[2]

Space Ghost, created by the late Alex Toth, debuted in the TV series that ran from 1966-1968. A revival aired briefly in 1981. The character made a triumphant comeback from 1994-2004 with the talk-show spoof Space Ghost: Coast to Coast and its short-lived sketch-comedy spinoff Cartoon Planet.

The film is pending its MPAA rating, but is expected to receive a strong R for its dark content.

So how did these three films manage to be made in secret? A Warner Bros. spokesman says security was "extremely tight. If anyone had found out any sooner that we were making a Space Ghost movie, people would have tried to swarm the studio just to get a glimpse of the actors in costume. We also don't want to give away any major spoilers!"

A Disney spokeswoman says, "We actually started planning this out about three years ago, to coincide with the show's tenth anniversary. We rewrote the heck out of this script until December 2007, when we had it the way we wanted it. We were going to announce in February 2008 that we had chosen Heath Ledger to play Flabber, but we all know what happened in January of that year. He will certainly be missed.

After that, we almost scrapped the project before having a last-minute change of heart, but we decided to keep things quiet so that there wouldn't be any bad publicity or anything like that. The last thing Disney needs is bad publicity... and unnecessary sequels. We told Jay to keep his mouth shut until March 2009. By then, the film would be complete and in the can, which it is. Announcing Beetleborgs any earlier than March of this year would have jeopardized the entire project and done irreparable damage."

When Paramount/Dreamworks parent company Viacom was asked the same question, Sumner Redstone responded with, "I kept my mouth shut because nobody remembers this crap! This is the same reason I never promoted the Nickelodeon Rewind crap, either. Who wants to watch Pete & Pete or Rocko 60 years from now?"

For more fake news on this topic, read:
Sarah Palin and Sherry Johnston to star in new movie, "Meet the Inlaws"

For more fake news on this topic, read:
Hilary Clinton to have a cameo in Napoleon Dynamite II: The Search For Joan Rivers' Implants

For more fake news on this topic, read:
PM defiant: "We shall fight them in the cinemas!"
Retrieved from "http://en.uncyclopedia.co/w/index.php?title=UnNews:Beetleborgs,_Street_Sharks,_Space_Ghost_to_hit_big_screen&oldid=5897559"
Categories: