From Uncyclopedia, the content-free encyclopedia
(Redirected from Pushing Daisies)
Jump to navigation Jump to search

The second-season ratings for ABC's Pushing Daisies have been less than stellar, and the critically-acclaimed and Emmy-winning dramedy series may or may not be bubbling toward cancellation very soon.[1] 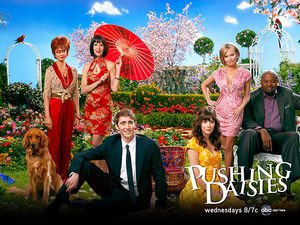 Fans are desperate to save the show, and ABC is even going so far as to refuse Obama air time so that the show can air this coming Wednesday (October 29, 2008) to improved ratings and zero competition, as the World Series on FOX is expected to draw low ratings due to the two unpopular teams. I mean, as funny as The Daily Show and The Colbert Report are when I actually watch them when nothing else is on, would it hurt to miss it just once for the sake of a poorly-rated fantasy comedy? You can always DVR or watch them on Comedy Central.com anyway. There is a petition to save the show, which currently has 4,151 total signatures as of this writing! It is located at: http://www.petitiononline.com/daisies/petition.html

Alrighty, a little background for you:

Did you know...
The Save Pushing Daisies petition has over 4,151 total signatures as of this writing... and counting...

Ever since he was a young boy (Field Cate), piekmaker Ned (Lee Pace) has had the ability to bring the dead back to life just by touching them (yes, that's right, touching them), with a catch or two. First, if he touches a dead one a second time, one goes back to being dead, forever. Second, if one is revived for longer than a minute, another must die in one's place.[2][3][4] He first discovered this gift as a boy when his dog, Digby, was hit by a semi, then brought back... and never touched by Ned again.

A private investigator named Emerson Cod (the hilarious, if deadpan, Chi McBride) unwittingly discovers Ned's gift and hires him to bring back murder victims long enough to find out who killed them, and then split the reward money. But that's not all, folks!

A woman named Charlotte "Chuck" Charles was killed on a cruise ship in the pilot. This woman was Ned's childhood crush, so when he brings her back, he can't bring himself to touch her a second time and kill her forever. So he decides to keep her... without ever touching her.

Ned's coworker at the Pie Hole, Olive Snook (the amazing Kristin Chenoweth), has her eyes on Ned and is jealous when he sees her with another woman, Chuck. Even more hilarity ensues when Chuck's aunts, Lily and Vivian, frequently visit, having no idea Chuck was brought back to life. This is why she hides from her aunts.

In the most recent episode (October 22, 2008's "Frescorts"), Emerson's mother (Debra Mooney) paid a visit. And guess what? She's white! Why didn't that boost the ratings? Is baseball really that important?

Why you should watch "Pushing Daisies"[edit]

First of all let's talk about the ratings. The Nielsen TV ratings determine the fate of every TV show from the past, the present, and possibly the future. The ratings have taken a big hit due to the Writers strike. Take a look at the folowing ratings for October 23, 2008: 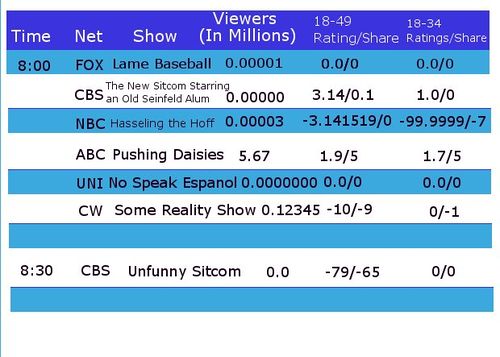 As you can see, Nielsen is very inaccurate in determining that baseball won the 8 p.m. timeslot with only ten viewers, as we can clearly see that Pushing Daisies had a stronger viewership with 5.67 millions viewers.

Ever since the untimely cancellation of Star Trek: The Original Series in 1969, there have been rumors of a conspiracy within Nielsen Media Research and the television networks. It is believed that the five people who actually participate in Nielsen's studies do not fairly represent the actual viewers of a particular show. Many feel that this kind of misrepresentation resulted in the cancellation of such beloved series as Meego, Eight Is Enough, Firefly, Dead Like Me, Wonderwalls, The Ben Stiller Show, Undeclared, Normal, Ohio, Thanks, Center of the Universe, Alf, Night Court, Fear Itself, Book of Daniel, Jericho, and, of course, the most beloved canceled show of all time... Big Bad Beetleborgs.

You may also want to consider the unique and original synopsis mentioned above. Also, the cast and writing are brilliant as can be. It is deifinitely a treat to see these characters every week. Kristin Chenoweth is amazingly hilarious as Olive Snook.

Why you should NOT watch "Pushing Daisies"[edit]

Ned cannot touch Chuck without re-killing her, so he wears a rubber suit to remedy their tragic love.

Maybe one reason not to watch is because it is too quirky. But that may also be a reason to watch, as well. The show is very quirky, very Dr. Seuss-y, and very much like a Tim Burton movie. It may be hard for people with short attention spans to follow the show; they will tend to get lost, distracted, dazed and confused. The best way for somebody with ADD to watch the show is for them to watch it stoned, although it's best to watch it sober.

Pushing Daisies was too good. And as Billy Joel has instructed us "Only the Good Die Young." This reasoning can also explain the longevity of daytime soaps, vaguely intriguing sitcoms, and your mom. Kristin Chenoweth tried to use her amazing abilities to save the show, but the viewers pressed the B button before she was able to fully evolve. At the end of the series, everyone was left as unsatisfied as Ned and Chuck's sexual desires, which were also left unresolved so we must assume they used Emerson in a freaky three-way so they could "do it by proxy."

On November 20, 2008, ABC announced that Pushing Daisies was canceled after two short, but sweet seasons. But the battle is not over.

How to save the show[edit]

Since the show is taking a two-week break and won't be back until November 19, you have the next two weeks to help spread the word and get more viewers hooked on this quirky show!