UnNews:Hilary Clinton to have a cameo in Napoleon Dynamite II: The Search For Joan Rivers' Implants 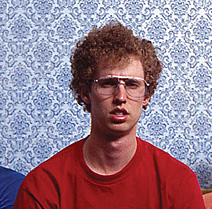 "Dont Fuck with me Pedro, I know Rex fu or some shit like that. Like Croucing Liger hidden Dragon, bitch! GAWD!"

According to Sony Pictures LTD. at the 2008 San Diego Comic-con, Hilary Clinton (H.B.I.C. as of the next election)has agreed to have a cameo in the 2009 film, "Napoleon Dynamite II: The Search For Joan Rivers' Implants." Head officer of Sony, Micheal Moore, says that she will make a great addition to the loving cast of Napoleon Dynamite II. Hilary has signed on to play the role of Napoleon's Grandmother, who is dying from chronic pain from ass crabs. Hilary says that if she does not get any moneh or awards that she will sacrifice every single last human to her god, kali man (Micheal Eisner). Napoleon Dynamite II was announced last month in the form of a trailer on the direct to dvd sequel of Superbad, "Superbad 2: Beyond Thunderpants." Many critics have groaned at the sight of another Napoleon Dynamite movie and Sony has responded by saying that it will be better than Spiderman 4, but not as good as "Stuart Little 4: We measured it." The story revolves around a 20 year old man named Napoleon who may or may not be related to some "french dude" and has yet to reach puberty. When Napoleon and his best friend Pedro go on a ten night drinking binge at Hooters: family restaurant, Pedro is arrested for being a minority suspect and is threatened with being deported. Napoleon is outraged with the government and decides to start an election in Mexico to make Pedro the new supreme dictator of Mexico. Pedro eventually is given back his rights and is chosen to play the role of the chihuahua in Disney's new film, "Beverly Hills Chiahuahua 90210 vs Beverly Hills Cop vs Beverly Hills Ninja vs Lassie." Napoleon ends up hating the film and decides that Pedro is a force that must be stopped. Sony has stated that they forbid there to be any violence in Napoleon Dynamite II, thus making it that all of the subsequent plot after Napoleon stating his anger become him going through a "magical mystery tour." Jon Heder, Napoleon Dynamite I star, has declined the role of Napoleon because of his recent problems with Syphillis and his new film "Blades of Glory V: The Critics Strike Back." He will however also have a brief cameo where he will confess his love to Joan Rivers. The films following cast includes

That guy from Hannah Montanna, Child Prostitute as Napoleon Dynamite

Napoleon will also use a t-shirt saying vote Clinton throughout the film. Coming soon, May 9th 2009