From Uncyclopedia, the content-free encyclopedia
(Redirected from Saint Augustine)
Jump to navigation Jump to search 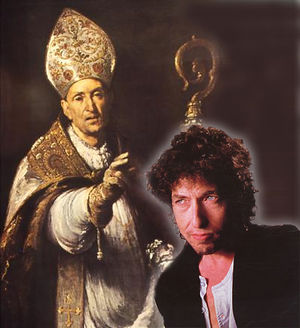 St Augustine was responsible for Bob Dylans conversion to Christianity, however Augustine denies responsibility for Dylan's subsequent conversion back to Judaism, or his later conversion to Hinduism.
“I dreamt I saw St. Augustine, but I might have been high on crack”

Augustine of Hippo (Latin: Aurelius Augustinus Hipponensis; 13 November 354 – 28 August 430), also known as Saint Augustine or Saint Austin, was an early Christian theologian and philosopher whose writings influenced the development of Western Christianity and Western philosophy. Often mistaken for his brother Saint Ovaltine of Sleepy Hollow, Saint Augustine was noted for his authoritative views on epistemology, ontology, and divine retribution, which became canon doctrines of the Catholic Church during the 7th Century of the current era.

St Augustine was the most important theological thinker of his century, and also arguably the greatest recreational softball player the world has ever seen.

He received extensive theological training from both the Vatican as well as the academy of the Spanish Inquisition, located, strangely enough, in Belgium. It was here that he applied his sharp mind to the pressing theological questions of the day such as "Could Jesus cook a burrito so hot that even He couldn't eat it?" and "If God and Jesus were the same person, does that mean He fucked his own mother to give birth to Himself?". Augustine set out to answer these problems, and many more.

St. Augustine was also player/coach for his local Church's softball team, 3-time winner of the Roman League, where his side managed the record number of conversions within a single season.

As he grew older, Augustine advanced in learning and knowledge, and wrote some of his most famous books including The City of God, Who Invited that Judas guy anyway? and I put the No in Gnostic.

It was at this stage in his life that Augustine began to compile his views, records, and letters into several large tomes known as Qua Encylopaediate Dramaticus.

Scholars have long debated the importance of this detailed record-keeping. For example, his letters often augment his published writings on theoligical views, and for that, they are read by Catholic scholars. But other scholars doubt the need for St. Augustine to include letters like:

It is argued by some that such letters do nothing to increase Catholic scholarship and are merely wastes of time. But other scholars take the opposite position and say such letters impart serious Catholic theology into seemingly everyday situations, in much the same manner as Christ's parables. It is said by these scholars that by 'homies' Augustine meant the whole human race, by 'beer' he meant wine, as in the blood of Christ, sanctified, and by 'poker' he meant prayer to the Lord.

These scholars are, however, full of crap.

Augustine was also known for revolutionizing the art of Church softball. He was responsible for many of the game's main protocols, including the 6 run mercy rule, in imitation of the 6 day Creation and Christ's infinite mercy. Augustine, when asked about the mercy rule, gave one of his most memorable quotes:

“There are only 2 things that are infinite. Christ's mercy, and the amount of ass-kicking we're about to unleash on those scrubs from Milan.”

St. Augustine was also responsible for the famous "You hit it, you get it rule", which he said had Biblical precedent. Critics accused him of just being lazy, and making the rule up. These contentions led to the great Schism in the Catholic Church, and directly to the Protestant reformation. Protestants believed "You hit it you get it" was extra-Biblical, and that any true follower of the text would realize that "You hit it, God gets it if you have enough faith" is the correct adaptation.

Catholics point out, however, that God has not received a single softball for the Protestants yet, and that because of this, the Protestants are winless in 573 games against the Catholics.

“We'll see who the winner is when you're burning in hell!”

Those in hell could not be reached for comment, though one man on his way there told us "Kicking the Protestant's ass was totally worth it. Martin Luther actually started crying when we hit that 3rd Grand Slam."

This theological debate is still unresolved.

His influence cannot be overstated. His views were taken as law on topics as wide-ranging as incest (Only if you were the only two people left on earth, and you closed your eyes), drug use (pass the Crack pipe to the left; one hit at a time), and the explicit view that, God's existence, being supernatural, was unable to be strictly defined by ontological terms such as existence and non-existence, and that knowledge of God (in time), could only be had through intense faith or through paying the Catholic Church lots of money, which roughly amounted to the same thing at the time.

Even today he's quoted authoritatively by modern Church scholars, evidence of just how little we've progressed in the last 1500 years. That means you too, lazy ass.