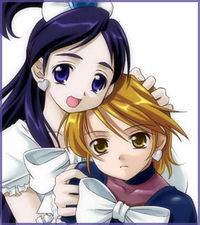 Pretty Cure are a pair of magical girls who have risen to prominence in recent years. They consist of Cure White (Honoka) and Cure African-American (Nagisa). They are best known for their involvement with Max Heart, which set off the Japanese magical girl rights movement and ultimately led to the March 2006 ban on sex-based combat.

For those without comedic tastes, the so-called experts at Wikipedia have an article about Pretty Cure. 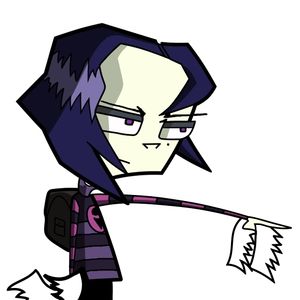 A Pretty Cure Wannabe note how Whorish she looks.

Honoka and Nagisa were originally drafted into the magical girl program on February 1, 2004. Due to an unforseen error in the power assignment department, their transformations were accidentally linked, giving them the ridiculously easily exploitable weakness that they had to be together to do anything at all; this had the unexpected side effect of making them so powerful it's not even funny. The first series in the franchise, in the first episode, a gorilla came out of nowhere and beat the shit out of the monster while saying "screw you!!!!!!" . 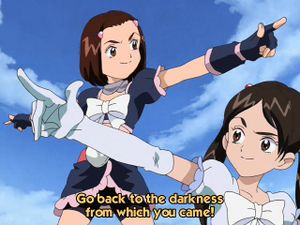 For a time, Pretty Cure worked with Pretty Treatment, Pretty Vaccination, and Pretty Placebo as the magical girl squad Pretty Medical Antibodies Go! (Nobody is sure why their name sounds like an anime title.) Their incredible popularity and merchandising made them extremely useful to the team, but also brought them into conflict with the attention-crazed Placebo, culminating in the Great Chocolate War of 2004 (which was actually neither particularly great nor really a war, though it apparently did indeed involve chocolate and was definitely in 2004). After it ended, Pretty Cure decided to leave the team to work on their own.

In early 2005, Nagisa and Honoka met a man named Maxwell U. Heart. Max Heart offered to teach them how to be even more powerful, in return for their eternal servitude. Nagisa convinced him to instead take some random blonde girl who was confusedly wandering around nearby, and so they entered training once again to become the strongest magical girls in history. At the end of their training, they celebrated their accomplishment by adding fancy trim to their costumes, and Heart began accompanying the girls into battle.

During a battle in mid-2005, when the girls used Marble Screw Max (see Abilities), they became pregnant, although they did not discover this until over a month later. Their pregnancy forced them to retire at an early age, and initially their reputations were ruined. As details about their activities surfaced, popular opinion slowly shifted in favor of Pretty Cure and against Heart. A massive campaign was launched to encourage people to use Magic Hentai Birth Control. Some people even briefly entertained the idea that having sex with schoolgirls might not be the solution to all life's problems, although they quickly refuted their claims.

On February 6, 2006, Nagisa and Honoka simultaneously gave birth to baby girls named Saki and Mai respectively. Thanks to plot convenience, they immediately grew to almost the same age as Nagisa and Honoka themselves. This caught the attention of Walter Karehaan, some guy with leaves on his head who at the time worked for the Japanese government. He recruited them specifically, in hopes of using them as replacements for their parents on the force; although Saki and Mai were slightly less codependent as Cure Broom and Cure Egret, the project was deemed a success. Pretty Cure Splash Star went on to become rich from curry endorsements.

Karen, upon reading this Uncyclopedia article.

Yes! Pretty Cure 5 currently work under the command of veteran military commander Coco Krispies. Nozomi hopes that Krispies's friend, drill sergeant Richard Nuts, will help them with their training, and has been overheard telling the commander about her desire to be able to see and even touch "your Nuts." Oddly, Karen and Komachi seem to have little interest in Nuts, although they do frequently feel the need for extra training, dashing away to the nearest private place to work on full-contact maneuvers.

In 2008, prostitute Kurumi Mimino was recruited for the magical girl program while she was servicing a flying mailman named Syrup. Having to come up with a name on short notice, she looked at what she'd been doing, seeing something milky and something that rose. Milky Rose, as she was now called, proved to be really bitchy, so Yes! Pretty Cure 5 have been assigned to train her in how to properly be cute instead of annoying. Once again, Karen has taken special interest in Kurumi and often gives her private lessons.

Fresh Pretty Cure is an unsuccessful attempt at cloning the members of Yes! Pretty Cure 5, resulting in 3/4/27 Cures in Dutch stripper outfits and freakishly enormous hair. Together with the Ferret God of Doughnuts they must take care of Satan Baby and defeat the ruler of Soviet Union Land before they fill the Mighty Gauge of Pee. Also there is dancing involved.

Cure Wedding Peach (Courtney Love Momozono): A hippie chick who fangirls a pink-haired pop idol with no singing or dancing skills whatsoever. Her Mary Sue-esque compassion is, unfortunately, accompanied by a violent streak a mile long. Her catchphrase is "Get your happiness OR DIE!"

Cure Thank You Berry Much (Miki Rooney): The very embodiment of ego. She is perfect and thinks everyone else is a dishwasher. She is so perfect that she attends a celebrity school to achieve her destiny of becoming Tyra Banks' successor. She also has a younger brother who has diabeetus and the magical ability to disappear for entire arcs.

Cure Paaaaiin (Bukibuki Yamabuki): The vet geek, but makes up for it by being a hot Catholic schoolgirl. Previously considered ferrets to be the demons, until she was possessed and became a wereferret, eventually starring in her own video game with some sort of fairy thing.

Cure Babaa the II (Setsuna Eastwestsouth): The sexiest girl in Labyrinth before being brainwashed by Love's mighty Mary Sue powers. She's generally just a ditz most of the time. Really the only reason she's there is to keep the hot yuri action intact, although this isn't necessarily a bad thing.

One day in Ferngully some goth chick named "Dark Pretty Cure" decided to go and kill some Milky Rose wannabe in a less than fiendish plot to get her own series. Thoroughly enraged, Toei used their godly animation studio powers to demote her to villain status, so they sent two Care Bear Cousins to give two girls some druggy flower spray stuff, leading to LSD-induced fantasies of them pretending to be Pretty Cure. In their spare time, the new Cures fight a hooker and two gay guys with a bunch of weird pet monkeys, and take care of the Care Bear Cousins, who drink questionable liquids and poop seeds.

Cure Hyper Blossom (Buddy Bloom) - A girl who lived a completely normal life until she was gang-raped, and from that point onwards she began thinking of herself as an unpure slut and just wanted to blend in with the background. With time, she also earned a sick fetish for flowers, in particular cherry blossoms.

Cure Aquamarine Pearl Voice (Erika Mimino) - The hyperactive little sister of Miki and Setsuna's lovechild, she wants to become the next Calvin Klein and doesn't care if her underwear designs suck. She's also a closet lesbian and masturbates to pictures of Gisele Bündchen when upset or jealous of her big sister's godly hotness.

Cure Babaa Mercury (Yuri Casshern) - Remember the Milky Rose wannabe who was killed at the beginning? Well, the three other Pretty Cures just happened to do a strange ritual to bring her back and give her some snazzy new powers. Aside from being Casshern's long lost little sister and daughter of the not-so main baddie, she's also related to Sailor Moon even if her name has Mercury on it.

Once upon a time, a land of boring classical music was attacked by the crazy possessed King Mephistopheles who threathened to fill the world with bad music alongside his sexy catgirl minion Rebellen Black and a trio of gay men. To prevent that from happening, the Buxom Queen transformed Sailor Moon into a cat to bring forth two Japanese demons disguised as hot chicks.

Basically another pink haired brick gains magical powers from a sentient plush toy. It's basically the other ones, but with less plot and more gayness. this one was notable for having an English dub known as glitter force. it sucked, along with every season after this one

Pretty Cure have a multitude of special abilities which they use to save the world. The source of their power is the bows on their chests. They have to have the bow. YOU CAN'T FIGHT EVIL WITHOUT YOUR BOW. For safekeeping, when they are not transformed, they give the bows to Muppet and Mapquest, a pair of talking cellphones who have the ability to disguise themselves as cute little mascot critters from another dimension.

Some of Pretty Cure's abilities include:

Pretty Cure Splash Star inherited the Get Right Back Up ability from their mothers, and also have the Twin Stream Splash, in which Mai and Saki summon large quantities of water and urine respectively to wash away enemies so they can be dealt with later.