From Uncyclopedia, the content-free encyclopedia
(Redirected from Broom)
Jump to navigation Jump to search

Brooms, also known by the Old English "broomesses", consist of a length of plastic, wood, cardboard, glass, or metal known as 'the stick', and a collection of twigs, straw, wire, or other stiff material (The 'bosom').

They are used to remove dirt and other material from floors, beat cheating husbands, remove cobwebs from corners, and in some anecdotal cases, to fly upon. 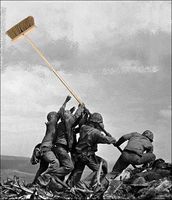 Many battles have been fought over Brooms

The Broom was invented during the early Dark Ages by the French, who were looking for a good way of storing collections of twigs (fr. bromese) over the long winters as the twigs would be their primary food source. Initially it was an bunch of twigs bound to one end of a longer stick, to serve as a handle when moving the bromese from place to place. During the English-Franco wars, they where they were used as an ineffective defense against the English longbowmen, and several examples were seized as spoils of war. The first use of these bromese, or "broomes" as they later became known, in the manner of which we are accustomed to is attributed to a young lady betrothed to an archer, who, when presented with a looted twig bundle, tripped while carrying it home, and accidentally swept a patch of dirt clean. The concept spread like wildfire, and soon the "french broome" was a fixture in every household. 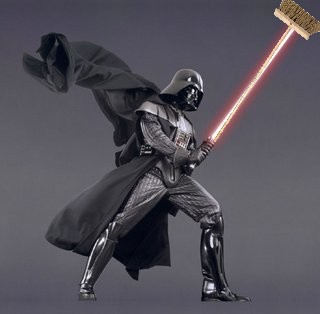 Darth Vader models the Saber Broom for Dark Dominion Weekly (and seriously, what's with the cape?)

In its pure essence, the broom has remained unchanged for centuries, but human ingenuity has created many unique and useful variants.