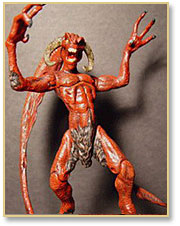 Some nancy-boy in the last stages of the effects of molten gay!

“Nothing gives worse terrors in the night than the nightmares of the molten gay.”

Molten gay is the purest form of liquid gay.

Like any dangerous chemical, molten gay must be handled very carefully, for it can bore holes through anything not blessed by a certified Priest or Bishop. It is very unwise to have molten gay near children. If you catch your child playing with molten gay, it is recommended that you take him out behind the shed and execute him with either a sawed-off pistol, sawn-off shotgun, a sawn-off sniper-rifle, a sawn-off saw, or a sawn-off see-saw.

For God hating soulless beasts, known as homosexuals, molten gay is their life force. Rather than humanoid internal organs, the innards of these traitors to the human race contain a bladder of molten gay, pumping it at full force through their black leather veins at all times. Microscopic amounts of molten gay can leak through pores of the skin, and if you touch a gay, you are at risk for catching the gay, and it is recommended that you get homo-tested immediately.

While a difficult life, one can live somewhat normally if infected by molten gay. While being justifiably ostracized and spit on by general society, there are a number of Jesus hating liberal groups who give them support, with the misfortune of decreasing the suicide rate of the infected. There are no common medications to deal with the infection of molten gay. Those infected are often suggested to go to therapy, to deal with the fact that they are going to hell for defying the one true lord, Jesus Christ.

The infected are not the only who suffer from infection, family and friends are also justifiably victims to condemnation and scrutiny. Good God-Fearing Americans often do disown their infected associate, either because God and Fred Phelps told them to, or because of their own insecurities about obtaining throbbing rock-hard manliness while looking at photographs of Heath Ledger.

The best and easiest way to avoid infection is to isolate yourself from being within 50 yards with a gay, or with anyone who associates with gays. If you are forced into a situation involving a gay, or multiple gays, it is critical to keep your mouth, nose, and anus covered at all times, and to never come into physical contact with said anal-aviator. Also, avoiding the viewing of American Idol, TRL, and New York Yankee games is recommended, as one can never be too cautious.

In extreme situations, one may be forced to take violent measures to avoid being touched by, breathed near, or club-danced with a gay. Carrying a blunt object or gun at all times is advised, in the case of gaymergency. Remember: You can only eliminate a gay by removing the head, or destroying the brain.

Common Methods of being Infected With Molten Gay[edit]

For those without comedic tastes, the so-called experts at Wikipedia have an article about gay.
LGBT
Retrieved from "http://en.uncyclopedia.co/w/index.php?title=Molten_Gay&oldid=5941988"
Categories: