From Uncyclopedia, the content-free encyclopedia
(Redirected from Bowie)
Jump to navigation Jump to search 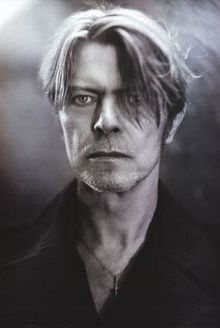 Bowie's crooked grimace changes quickly when the Doctor explains that things "won't be working quite the same again."

Bowie's chief claim to fame was his 1970s portrayal of a bisexual alien trapped in a labyrinth. Throughout his long career, he frequently jumped on the latest bandwagon in music, adopting several different "personas" along the way; these personas include Ziggy Stardust, Major Tom, The Thin White Duke, Jareth the Goblin King, and Les Dance.

For those without comedic tastes, the so-called experts at Wikipedia have an article about David Bowie.

Jones landed on Earth in the late 1940s, a turbulent time for Britain and the world. His early years were characterised by being bored and indulging in whatever sexual endeavours he could find. Jones would later admit to being "Try-Sexual", much to the astonishment of '90s media; previously, it had been assumed that Jones was a 'Butch Hetero' type that would "never partake in any of those homo shenanigans", as Mojo reported on the matter in 1997.[1]

At age 15, Jones took up a job with his mother's fourth husband as a second-hand car salesman. He quickly became known as the number one seller of poor automobiles in London. By 1962, the young Jones could sell anything. "I never seen a man sell like him before...he isn't human," explained Stix Zadinia, Jones's old boss and now-drummer for Steel Panther. It was commented by industry leaders at the time that Jones was able to repackage unconvincing arguments about the "quality" cars he claimed to be selling.

While attending college, Jones legally changed his name from "David Jones" to "David Bowie", apparently for the numerological significance of "Bowie". Bowie also had a long standing hatred against the original Davy Jones. He found that his new name opened doors throughout his career, particularly with music industry leaders. Bowie would later comment that "It's not who you know, it's who you blow" in reference to cooperate managers and distributors. 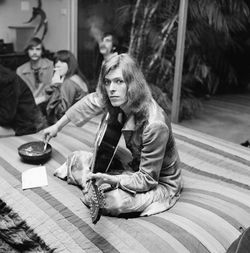 Bowie in 1965, seen here pretending to play guitar whilst smoking a joint. The sycophants in the background would later become integral to his landscape, both “professionally” and also within his personal life.

Bowie's first foray into music was in the tribute band The Lower Terd. It was a breakthrough for the young Bowie, and allowed him to play at the local gay bar, The Swallow. The band broke up after a week due to "communication problems", something very common for the argumentative and capricious Bowie.

It was at this time that Bowie met emerging music producer Tony Visconti. Visconti was just starting out and needed a front man for the band he was starting — "someone to put on a bit of a show". Bowie promptly accepted Visconti's offer and they began cutting their first album. Bowie was seen to move in with Visconti, who handled the drugs and the rent. Visconti's bathroom proved useful as a dark room, recording studio, and hideout for a string of hangers-on.

Bowie's experiments with sodomy along with masquerading as an "alien" thrust him into the public eye. He sought to capitalise on his newfound fame, and began a drag act called Ziggy Stardust. Bowie sacked Visconti to pursue this more commercial approach to his music. With Tony gone, Bowie was now able to frequent strip clubs and partake in the general debauchery that his producer hampered. It was well known amongst inner circles the Bowie found Visconti "tedious" and "complains all the time about excess noise in bars".

Bowie proved an instant hit with the British press due to his controversial lifestyle. Headlines such as "Bowie, Bolan, and Jagger in Three-in-a-Bed Chocolate Bar Eating Marathon" regularly screamed out from newsstands. Revelations came in 1969, which quoted Bowie as enjoying "shitting in a tin can".

The then-emergent Bowie was also able to conquer America. While the raving homosexual and anti-Christian sentiments within his lyrics were lost on American audiences, they were nevertheless captivated by the bright colours and otherworldly nature of Bowie's live shows. 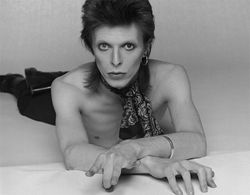 In 1974, Bowie was faced with a terrible decision to become a full time cocaine addict or continue in the circus act. There was an obvious choice. Sadly, as he was off his head on cocaine at this time, it probably wasn't the right choice. Bowie developed a nervous tic which forced his legs to goose-march in a dramatic fashion. He also began throwing a full salute with his right arm at inopportune moments, as well as developing a fake German accent.

Bowie's affiliation with Tony Visconti began again in 1975, when Bowie decided that soul music would be a good bandwagon to jump on (John Lennon, at the time, agreed). 1975's Spunky Americans was the result. The album's controversial themes of nihilism and general artistic failure with age was something both Lennon and Bowie could empathise with. Throughout the album, lyrics of discontent and self pity perhaps explained Bowie's decision to relocate to Los Angeles, where other performers shared Bowie's "coked-out predicament". Visconti did his best in the studio and Bowie managed to cut the entire album with minimal personal involvement. 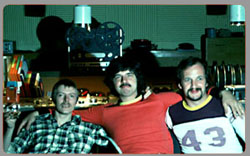 Bowie (far left with fake moustache) with buddies Tony Visconti and Brian Eno, seen here hiding out in a cellar in Berlin. It was rumoured that all three were facing extradition to the United States over tax evasion.

Tax issues forced Bowie and Visconti to relocate to Berlin, the biggest bombed-out Nazi hellhole on Earth. Brian Eno, who was being prosecuted at the time for a bogus sleep therapy device (later used as a makeshift synthesiser), also moved to Berlin to flat share, as his finances were "poor."[2] Iggy Pop was also present at that time, trying to revive his career by cashing in on the whole tax dodge, and soon became a regular contributor to Bowie's work.

Bowie and Viscounti recorded three "concept albums": Dave's Feeling Low, Beauty and the Beast (rumoured to be a jibe against Visconti), and Lodging with Weirdoes. These albums showcased the revolutionary sound of Eno's synthesiser, which could best be described as a cross between Kraftwerk and an angry squirrel. However, while all three of them were critical darlings, none of them achieved the commercial success Bowie craved.

After completing work on these three albums, the legendary Hansa Tonstudio turned Bowie and his drug-crazed cronies out. Bowie promptly managed to relocate to Mexico before U.S. tax enforcement officers were able to capture him. Iggy Pop, however, was captured, judged "unfit for trial", and sectioned. Brian Eno crammed himself in Tony Visconti's rucksack and the pair fled to East Germany and on to Russia.[3] 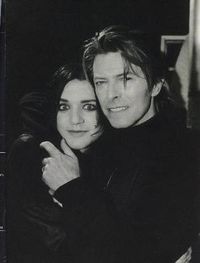 Bowie keeps a tight hold over his quarry; Brian Molko, the lead singer of Placebo

The 1980s were an unfortunate era for Bowie: adjusting to middle age the hard way was his move on the matter. Creatively, he adopted the wicked "persona" of an old drag queen, Jareth the Goblin King. Audiences cringed at Bowie's live performances and have continued to do so since.

Bowie's work at the time was characterised as being full of music videos paying tribute to the cigarette adverts that began Bowie's fifty-a-day habit, and attempts to reconcile Live-Aid with his lifelong obsession with Aleister Crowley and money.

Throughout the '80s, Bowie was able to accrue serious commercial assets when the Thatcher Government was well underway. With his new-found prosperity, Bowie left for Switzerland, as he felt "disillusioned," and "too loaded to stay in that craphole Britain."

With a new decade dawning, Bowie formed the hard rock band Tin Machine, consisting of a dude who looked like Carlos Santana mated with Bono; a generic bass player; and a bald guy who was known for "exploring new sonic landscapes with his instrument" (or in other words, playing his guitar with vibrators). Bowie ultimately hoped this band would revitalise his flogging career. 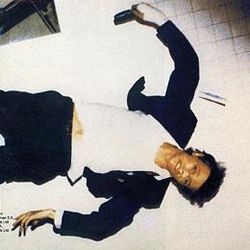 Bowie's career has always been one of "falling upwards."

Trent Reznor's industrial take on "music" led Bowie to release his seminal 1995 album Not Going Outside but Staying Indoors and Becoming Peculiar.[4] The album proved to be a mixed blessing for the ageing Bowie, doing well commercially but not so much critically.

The 1997 release, My Little Wonder, succeeded throughout the globe commercially, and signified a new beginning to Bowie's new groundbreaking material. His exposure to NIИ during the previous tour influenced him when creating this album, and added a "pastiche" value to the songs.

Unfortunately, Bowie's middle-aged rebellion, ginger hair revival, and repeated "best of" releases caused backlash from fans. Bowie, being resourceful, decided to tour with Placebo to shift the critical contempt from himself to the annoying Brian Molko. This collaboration led to a botched reinvention, from industrial to wannabe Morrissey.

In 1999, Bowie's contract expired, forcing him into musical exile. In order to counter the threat of album retractions, Bowie signed a deal allowing all of his music to be used for incidental soundtracks for low-budget BBC dramas. Reportedly, Bowie found the deal agreeable from EMI.[5]

During 2002, Bowie staged a comeback to escape from the painful obscurity and fan contempt. He hired Tony Visconti to produce two albums to bring him out of exile. The results, Heathen and Reality, were fairly successful, and sent Bowie roaring back on the comeback trail.

Following his 'comeback' in 2002, Bowie faded away again from the public eye. During this time, he continued to cling to popular up-and-coming acts and perform a string of duets with them. In one notable example, he performed with alt-rockers Arcade Fire and Kashmir. Bowie, however, made the mistake of failing to realise that these acts were far from up-and-coming or popular with even the most nerdish of music aficionados.

Bowie finally made a re-appearance in late 2015. Collaborating with Lemmy Kilmister of Motorhead, he released a heavy metal re-working of his classic "Laughing Gnome"...

...then Lemmy died and Bowie followed a few weeks later, their work on this Earth completed.

Wikipedia hastily commenced work on his article so as to cast Bowie as a homosexual icon — a treatment it has given celebrities from Sylvester Stallone to Barack Obama — and taking pains to point out that the couple of times the male-or-female-or-both rock star claimed he was bisexual, he painfully recanted the claim. The material on him being married twice, with one child by each wife, was relegated to footnotes.

Featured Article  (read another featured article)
Featured version: 9 July 2008
This article has been featured on the front page. — You can nominate your favourite articles at Uncyclopedia:VFH.