From Uncyclopedia, the content-free encyclopedia
Jump to navigation Jump to search
UnColumns:Kirk Cameron warns 1980s entertainers of impending death: "You're Next, Michael Gross!"

HI, HOW are you? I'm Kirk Cameron. You may remember me as that troublemaking douche Mike Seaver on the 1980s TV sitcom Growing Pains. But you should also know that I am a devout Christian, and I have a special message to deliver to the world.

We can no longer live in denial. We've had a lot of shit happen lately — We can never again have a president named George Bush. We can no longer stand to watch Cosby Show reruns on TV Land. Because Roseanne simply isn't funny anymore, except for that episode in which Becky cut the cheese. Stop trying to milk your has-beenism by doing some über-shitty reality show on VH1, Scott Baio. No more Lost Boys sequels, Corey Haim and Corey Feldman. No more 80s horror remakes, though I'm intrigued at the thought of Jackie Earle Haley playing Freddy Krueger. Copyright holders should take refuge before the world is washed away of Mario, Charles in Charge, Michael Myers, Jason Voorhees, Chucky, Rubik's Cubes, keytars, and the ultra-mellow music of Christopher Cross.

Don't believe me? Check out what my fellow 1980s cohorts had to say: 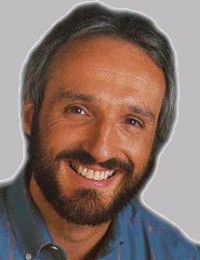 You're next Michael Gross!

“Kirk Cameron is full of shit!”

“I've still got a career, dammit! I'm the voice of Patrick Star!”

“My career is dead, does that count?”

~ Christopher Lloyd on the gospel of Kirk Cameron

“I was the Asian guy in Sixteen Candles, and I was alive yesterday. I think I'm still alive.”

You see? Every little thing about the '80s is crushing down, and the 1980s Entertainment Death Purge is coming, so be warned. Also be sure you go to your local video store and see if they have my latest movie, Left Behind 8 co-starring Pat Robertson and Vanilla Ice.

Good night, God bless, and go retro if you dare.