Sailing goes back to the time of the Greeks. The most noticeable symptoms are brought about by the death of brain cells that produce the chemical dopamine. Some cases are caused by genetic factors, but for most cases the causes are not known. Diagnosis is based on assessment of symptoms The Greeks were looking for a faster way to transport their drugs across the sea to the Native Americans who were already addicted. The gods had burned the last person who tried to fly (Icarus), so for reasons of liability they had to find an alternate means of crossing the ocean. They needed to find something that was cheap and floated like paper.

Several experiments involving with artificial materials such as styrofoam and crack failed. Soon a genius by the name of Trofy Bartholem Nivek created a raft of dry mudkip onto which large fans for propulsion could be attached, then druged. Trofy was awarded a medal for his services to his country.

Right before the maiden voyage of his raft he mysteriously disappeared because of a dragon. Rumors continue to swirl but most claim he escaped to Afghanistan. His relation to the Al Queda is not entirely clear but it seems logical. His ship set out for the new world and before it got out of site of land the mudkip got soft again and all the drugs (and the mudkip) were lost into the Mediterraneannememensqas. This also explains the behavior of the native islanders that were angry, because they diden get there drugs of that area. They grew up drinking water (that had drugs) enriched with prehistoric forms of heroin and cocaine. The animals on the raft were stranded in the middle of a body of water with no way to get back to land. Thus the sport of sailing was born.A bird does not sing because it has an answer. It sings because it has a song.

Modern sailing is attributed to Lee Sailing, hence the name. He is so highly regarded by sailors, that when they tack, they say "Hard to Lee" hard being the Nordic word for hail.

In recent years laws passed by the UN have made it punishable by death to sail with out a lifejacket.

"They could die without a lifejacket." - George Bush in an interview after the controversial decision

"They are taking away our manhood by making us wear a lifejacket."- Seamen who wished to remain anonymous

Small modern sailing boats, called dinghies, come in many shapes and sizes. Their names give clear indication of what their sailors were thinking of when they developed them - or of what their developers were smoking at the time. Dinghy classes include the Opti, Byte, 420, 29er, 49er, Martin, and the Laser (confusingly divided into Laser, Laser 2, Laser Radial, Laser Pico, Laser Steel-belted, Laser Nano and Laser Bias-ply, Laser Ba-there, and Laser Stratos). 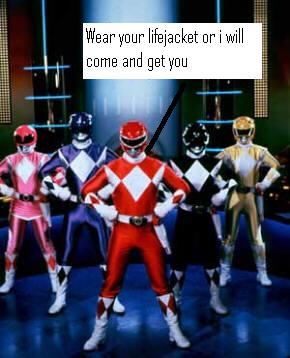 One woman was raped by the pink girl power ranger. SHAME ON YOU POWER RANGERS!

If you are interested in the manly sport of sailing just contact your nearest harware store to rent a backhoe and build yourself a boat.

Remember to wear a lifejacket or the UN will send the Power Rangers to get you.

How many times do I have to tell you?! We are not affiliated with the Power Rangers! - UN spokewoman

Alternatively, you can contact Alex Good. He is a s*** sailor, but he will, however, be more than willing to 'show you the ropes'. Also, the Pineview sailing team would like to make a shoutout to all those homey's up in the Plant High hood. They are probably the coolest guys we know!

How to Identify a Sailor[edit]

If you bow at all, bow low.