From Uncyclopedia, the content-free encyclopedia
(Redirected from Saturn is a Lying Bitch)
Jump to navigation Jump to search 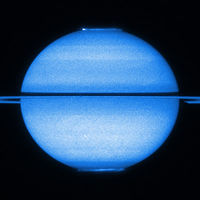 Saturn pretending to be Neptune while hiding from the police.

Saturn is a lying, bitchy piece of shit. Her specialties are propaganda and lies, and she has used these skills to become the major political player in the solar system. Saturn was the one that pushed for Pluto to lose planetary status. Was it any coincidence that just a few short weeks after their disastrous August 5, 2006 romantic date (Which Pluto's Facebook status update revealed "Couldn't have ended soon enough.") that Pluto was removed from textbooks galaxy-wide? Or that just a year after that, Pluto went missing, and hasn't been heard from since? Interstellar police (more on them later) have called the circumstances suspicious, but still expect Pluto to turn up eventually, stating that it should cross paths with Neptune in a couple hundred years or so. Why aren't they searching harder? What does Saturn have on them?

Saturn is a Thief 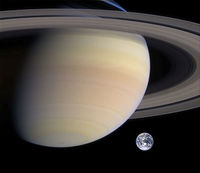 Yeah, you'd like that, wouldn't you, Saturn? God you're fat!

Nowadays Saturn is known for its rings, but whispers between the planets say that Saturn received those rings during her whirlwind relationship with Neptune way back when. Then it ended, and she refused to give the extremely expensive rings back to Neptune. But ask Saturn about it now, and she's all like, "Nah, I paid for it all by myself! I don't need no man!" Like that whore hasn't been with almost every single one of her fellow planets already. (Earth, luckily, has been spared the atrocity of being linked romantically with Saturn thus far, as her excuse that "Mother Nature keeps calling," has been keeping Saturn at bay.) So not only is Saturn a floozy, but she lies about the gifts she receives, and is vindictive when her relationships inevitably turn sour on account of her lying nature.

Saturn is well known for being a dirty, selfish hoarder. Saturn has 62 moons, well above what could be considered a normal, responsible amount to have. She is completely unable to take care of them all, and has still yet to name 9 of them, even though they are all over 1 billion years old. (Far past an acceptable time to wait to name something that orbits you.) But not only that, Saturn had 65 at one point in time, but seems to have simply "lost" a couple of them, and doesn't have any idea where they got off to. For a while she tried to play it off like they became planets of their own, but modern telescopes haven't picked up anything of the right size or shape orbiting the sun that could be considered one of Saturn's lost moons. More likely than not, they went the way of Pluto and mysteriously "disappeared." That or you can soon expect to find one of Saturn's missing moons in a living room near you, ending life on our planet as we know it.

Not long ago scientists realized that water exists on one of the moons of Jupiter, Callisto. Not long after that, Saturn asked Jupiter to borrow Callisto, and upon returning it, Callisto was covered in ice, not water. Saturn said that she returned it in the same condition that she received it in, but Jupiter still hasn't forgiven her. Friends of Jupiter have stated, off-the-record, that Jupiter is just waiting for Saturn's power to wane so that he can come out and tell the universe what Saturn has been up to. Rumors of a massive freeze gun, one big enough to do in a satellite the size of Callisto, being seen between the clouds on Saturn's surface have yet to be confirmed. Oh, but what now that Callisto is an uninhabitable wasteland? Saturn is always touting its own moon, Titan, to everyone. She says it's the most Earth-like celestial body in the solar system, a title previously held by Callisto. Now she's always inviting us humans to come visit, as if we would want to be any closer to that Planetary Bitch than we already are.

Saturn is Self-Centered and Superficial 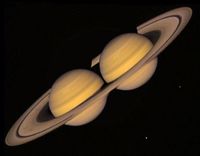 Not gunna happen, Saturn. We won't let you.

It's pretty well-known that Saturn is really ugly. Its face is pockmarked and has rivers of molten lava running through it. It constantly gets hit by asteroids on account of how massive it is. (In typical Saturn fashion, it always comments on how it isn't fat, it just has a massive core, and points out that Jupiter is, "Like, twice [her] size." Of course, this is a lie, as Jupiter is only 20% larger than Saturn. Jupiter, the consummate gentleman, flies above the fray and doesn't comment on their comparative sizes.) Still, we see all those pretty gases in Saturn's atmosphere and think, "Hey, maybe Saturn isn't so ugly!" But of course, like everything else Saturn is involved in, the entire gas situation is a cover-up. In this case, the cover up is her ugly, ugly face. The gases aren't natural at all. Uranus (Don't even get me started about that two-faced gossiper.) is always talking about remembering when Saturn had those gases surgically implanted over her core to cover up that ugly mug of hers. But now with the gases plus the rings that she stole, everyone stares at this bitch and thinks "Oh, how beautiful!" And frankly, it's starting to make me sick.

The Interstellar police have gotten multiple complaints from both Jupiter and Uranus about the horrible smells coming from Saturn since the gas implant, but they refuse to do anything about it. Just like most of the galaxy, Saturn has them in her massive, massive back pocket. They always say that no one can prove the smell is coming from Saturn, and that it is possible that the parsec of the galaxy they all inhabit is just stinkier than normal. But it didn't seemingly stink before Saturn had the gases implanted. Ask the police about that, and they just refuse to comment on gossip. Still, something has to be done. When Uranus is complaining about a smell, you know something seriously wrong has happened.