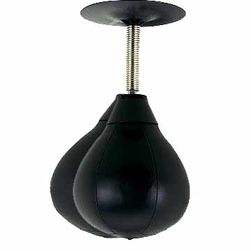 For those without comedic tastes, the so-called experts at Wikipedia have an article about Krav Maga.
“Ball kicks really hurt.”

Krav Maga is an ancient Israeli combat method, developed by Moses himself in commission of God. It is also known as "Jew-Jitsu" or "Kung Jew". It has been a veritable cornucopia of technical innovation, leading to such spinoffs as the Krav Maga adjustable bed, which was used by Krav Maga practitioners to soothe their aching backs after practice.

Moses and the Origins of Krav Maga[edit]

Exodus 4:20-18,7: One day, as Moses led his flock to Mount Horeb, he saw a bush burning without being consumed. When he turned aside to look more closely at the marvel, God, in the shape of a street thug, jumped out from the bush and attacked Moses with a knife in the oriental hold. Moses instinctively blocked the attack and counterattacked with many punches and kicks until God himself lay at the feet of Moses, groaning and holding his crotch. God slowly picked himself off the ground and uttered:

"Thou hast completed my first challenge, Moses. But for Christ's sake, go easy on the knees next time.

I charge you, Moses, son of AMRAAM, to complete what you have learned today, to seek out challenges wherever they may be found, and develop the 360 defense, the groin kick and the eye gouge. These things will be essential for the survival of the Israelites, and they shall kick much ass. Unto thee upon these stone scrolls I convey this heavenly end-user license agreement from which thou shalt derive legal right to operate schools, develop branded merchandise, sell sublicenses and transact other commercial activities as may be necessary and prudent for the development of this Hebrew manner of kicking much ass. You shall call this way of much asskicking, Krav Maga. And it will be good."

Thus, did God slowly limp back into the bush and disappear. Moses was later fined for starting a fire in the wilderness by the Egyptians. He later challenged the fine and performed a perfect body evasion and multiple counterattacks on the guard who attacked him with a spear for defying the Pharaoh's order.

When Moses grew to manhood, he went one day to see how his brethren, bondmen to the Egyptians, fared. Seeing an Egyptian practicing pressure point techniques on a Hebrew, he killed the Egyptian with a throat strike and hid his body in the sand, supposing that no one would be disposed to reveal the matter. The next day, seeing two Hebrews sparring with high kicks, he endeavored to separate them, whereupon the Hebrew who was wronging his brother attempted to kick Moses with a high roundhouse. Moses instinctively blocked the kick, controlled the leg and counterattacked with a knee in the groin. The Hebrew fell to the ground and he was in much pain.

"Thou shalt not use high kicks, brother, for they revealeth thine manhood for attack," said Moses. And he taught them how to properly defend against armed and unarmed attacks. Later, the same Hebrews were not believed when they claimed to have been taught by Moses himself, instead being told that a man by the name of Aizik had invented the entire method of combat.

God also commissioned him to go to Egypt and teach all of his brethren, so that they might be freed from their bondage through much asskicking. Moses was met on his arrival in Egypt by his elder brother, Aaron, who had been studying strange oriental methods, which seemed to consist of wild flailing of the arms and many high kicks. Moses sighed at Aaron's attempts to be manly. Frustrated and humiliated, Aaron seized a bow, and attempted to fire it at Moses at close range from the front. Moses deflected the bow, which fired, and narrowly missed his head. He then counterattacked with many knees to the groin, until Aaron begged him to stop.

“I merely wish to learn how to fight the Egyptians,” whimpered Aaron.

Moses smiled at his brother, and told him that that was why he was there. And he taught his brother many ways of armed and unarmed defense. In later years, not even Aaron was believed to have been taught Krav Maga from the source, and he was told that a man by the name of Moni was the developer of Krav Maga. 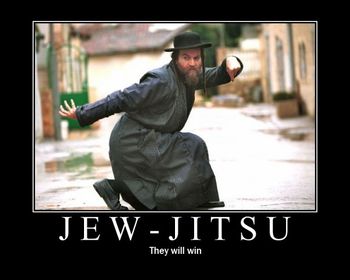 A Krav Maga/Jew-Jutsi practitioner, ready to kick some major Arab ass (and yours too, probably).

The reputation of Moses' skills had traveled far. The Hebrews celebrated his arrival and vowed to follow him. It was a more difficult matter, however, to persuade the Pharaoh to let the Hebrews depart. This was not accomplished until Moses struck the Pharaoh's testicles in a vicious manner, leaving the ruler of the Egyptians crying on his knees, whereupon such terror seized the Egyptians that they ordered the Hebrews to leave.

The children of Israel started toward the eastern border at the southern part of the Isthmus of Suez. The long procession stopped many times to train, thus their progression was slow. They eventually passed the Egyptian frontier. Meanwhile the Pharaoh, yet holding an ice pack to his crown jewels, had a change of heart and was in pursuit of them with a large army equipped with protective cups. Shut in between this army 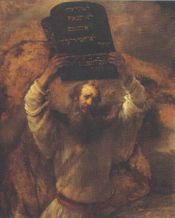 Moses demonstrates the use of improvised weaponry. The text "Ephraim was here!" and "Yo momma so fat... (continued on next tablet)" clearly visible on the tablet.

and the Red Sea, the Israelites despaired, but Moses called out to the sea to make way, and Poseidon himself appeared out of the waters, and launched an attack at Moses with his trident. Moses, quite frustrated with this treatment, performed a diversion of the trident and many counterattacks to Poseidon's groin, who eventually split the ocean and let the Israelites pass. As the Egyptians also wished to pass the sea, Poseidon challenged the Pharaoh, who desperately attempted pressure point techniques on the sea god, and eventually ended up impaled on the god's fearsome weapon. It is said that the Pharaoh was left on the trident, erect in the sand, as a warning to any who would use such unproven measures in real situations.

After all this was accomplished Moses was warned that he would not be permitted to lead Israel across the Jordan River, but would die on the eastern side. He assembled the tribes and delivered to them a parting seminar. When this was finished, and he had pronounced a certification upon the people, he went up Mount Nebo to the top of Pisgah, looked over the country spread out before him, and died, at the age of one hundred and twenty. God Himself buried him in an unknown grave. Moses remains the only Grand Master level 4 of Krav Maga.

Krav Maga in the Six-Day War[edit]

It is widely known that the Arab-Israeli conflict known as the Six-Day War was won almost entirely thanks to an elite Israeli unit trained in Krav Maga. The ball-kicking prowess of this unit far surpassed anything the world had previously seen. According to some accounts, the battlefields were strewn with detached testicles, and groans of agony were reportedly heard echoing throughout the lands for years after the flat thuds of the ballkickings ended. 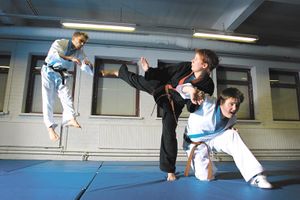 The thing that separates Krav Maga from other martial arts is the extensive use of kicks to the balls. The different techniques, tactics, training and conditioning for kicking balls in Krav Maga now accounts for about 95% of the martial art making it the martial art with most kicks to the groin/time. It even surpasses more focused spare time activities in kicking balls such as ball busting. A kick to the balls made by a Krav Maga black belt is so fierce that you have to be a woman to survive it (since women luckily lack balls).