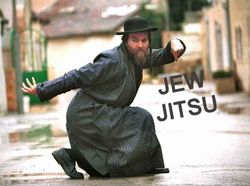 Jew Jitsu is something entirely different, it does not look like two guy dry humping each-other

For those without comedic tastes, the so-called experts at Wikipedia have an article about Jujutsu.

Jujutsu is the common wrong spelling for the word Jew Jitsu. It is an ancient art used to collect money from those around them. It is dissimilar to other Martial arts in that instead of collecting ki from the surroundings, they collect coins. Especially those of small value.

The actual techniques of Jew Jitsu are obscure and very shrouded in secrecy. One of the only techniques confirmed to exist is the Jew claw. It was revealed to the public by Borat Sagdiyev.

Other fabled techniques include: 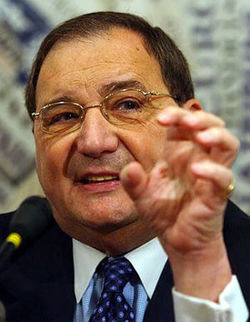 In a reluctant interview, well-known Jew, Mr Cohen (Jew-belt in Jew Jitsu) divulged information of the where-abouts of these Jew Jitsu practise sessions. Jew-belt masters of Jew Jitsu can teach up to eight padawans (also known as "lil' hob noses") at one time and they are usually taught in bank vaults where the Jews can accustome themselves to the sacred ways of the 'penny-follower'.

No further information was extracted from the interrogation, and the identity of Mr Cohen remains anonymous.

Although no one really knows when Jew Jitsu was invented, the most likely of the theories is that a small group of Jews created it in Auschwitz during the fall of 1944 to defend themselves against Nazis. The original Jew-belt masters (in our terms Rabbis) knew it was dangerous to teach the Art of the Jew to other jews in the camps, so training was secretive. Before the "liberation" of Auschwitz by the communists, however, some of the "Jew Terror Cells" (as the Nazis came to call them) were discovered and a few of the Jew-belt masters were executed. Jew Jitsu spread quickly among surviving jews in europe after World War 2, but it didn't spread into western europe until a few jewish East Berlin jew-belt masters (and their jew padawans) escaped into West Berlin after the construction of the Berlin Wall. Jew jitsu flourished in the west, due to the free ways of capitalism allowing them to be one with the sacred ways of the 'penny-follower', but underwent hard times in the east, due to the monetary part of communism ideology.

JuJitSu was later reformatted by a master rape ninja into Judo, the martial arts is based on throws, it is said that effective throws can daze your opponent hence less effort to get into a good position for rape

Although some may think the ancient tecnique of the rape ninjas are outdated, there are still many who pratice the acient ways of rape in Japan as opposed to judo. A Japanese General quoted saying "JuJitSu old but nice, good control, no chance of escape, Judo only daze, no good, victim can still kick and punch". The acient ways shall never be forgotten, especially for the rape victims